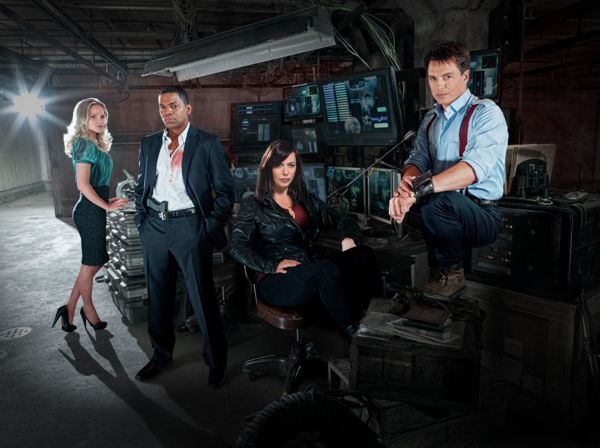 The fourth installment in the series, Torchwood: Miracle Day originally aired in the US on cable channel Starz back in 2011.  A joint production between BBC and Starz, many fans felt this fourth foray into the Doctor Who spinoff was entertaining, but maybe a bit lacking.  I have to agree that it seemed to lose a little something in its “Americanization,” but if you take at it as a stand-alone presentation it’s pretty awesome.

There were only two things Torchwood: Miracle Day really suffered from.  One was trying to fill the huge shoes left by the first three series, and the second was being broadcast on the pay network Starz in the US thus limiting its potential audience.  The second really made the first nearly impossible to accomplish, but that’s about to change.  Always eager to prove they love their viewers, BBC America is now bringing the latest Torchwood to the air to give a much larger audience a chance to see it either for the first time or to watch it all over again.

Torchwood: Miracle Day will premiere the first of 10 episodes on Saturday, September 14 at 9/8c on BBC America.

Don’t fret if it’s been a long time since you’ve seen any Torchwood at all because BBC America will be showing a marathon of series two and the 5-part series 3 Torchwood: Children of Earth beginning Friday, September 13 at 11/10c.  So get a lot of sleep, prepare a lot of coffee, and strap in for an all-night Torchwood marathon culminating in the premiere episode of Torchwood: Miracle Day.

Check out this teaser trailer peppered with a few gruesome and shocking snippets.  Just the kind of things you’d expect from Torchwood.

Imagine a day when no one dies.  The world is captivated when they watch convicted murderer, Oswald Danes (Bill Pullman, Independence Day), walk away from a lethal injection, and a suicide bomber continue to move after his head has been severed from his body. By all appearances it seems like a Miracle. But when the miracle repeats itself everyday thereafter, it is clear there is something more at play. Enter CIA Analyst Esther Drummond (Havins) and her partner CIA agent, Rex Matheson (Phifer).  As they investigate the series of bizarre events, they stumble upon a clue that might hold the key – the mysterious British organization, Torchwood.  They’ll team up with Captain Jack Harkenss and Gwen Cooper to fight the greatest threat to humanity – mankind itself.

Torchwood, a spin-off of BBC AMERICA’S highest-rated series, Doctor Who, premiered on BBC AMERICA in 2007 and was the channel’s most watched program of the year.  Torchwood: Children of Earth was also BBC AMERICA’s highest-rated series in 2009.  Torchwood: Miracle Day, produced by BBC Worldwide Productions for STARZ, BBC Cymru Wales and BBC Worldwide, originally aired on STARZ in 2011. The series was created by Russell T. Davies and executive produced by Davies, Julie Gardner and Jane Tranter.