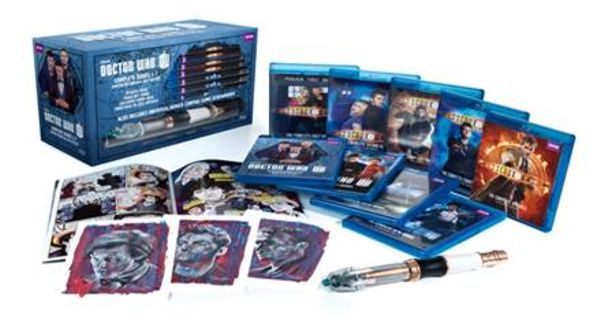 Not long ago the release date for Doctor Who: The Complete 7th Series DVD/Blu-Ray set was announced by the BBC and BBC America.  Now they’ve gone and announced a mega-pack of every-damned-thing to be released on November 5, 2013.  So save your allowance, fellow Whovians, and slobber over this delicious array of TARDIS-y goodness coming just days before the 50th Anniversary Special!

Read through this brand new press release straight from the BBC and tremble in anticipation:

Fantastic, Allons-y, Geronimo… Together In One Special Blue Box

“Do you wanna come with me? ‘Cause if you do, then I should warn you, you’re gonna see all sorts of things. Ghosts from the past. Aliens from the future.  The day the Earth died in a ball of flame. It won’t be quiet, it won’t be safe and it won’t be calm. But I’ll tell you what it will be: the trip of a lifetime.”  – The Ninth Doctor

New York – September 4, 2013 – The only thing better than watching Doctor Who is watching it in high definition, which is why BBC Home Entertainment is celebrating Doctor Who’s 50th anniversary with the release of Doctor Who: The Complete Series 1-7 Limited Edition Blu-ray Gift Set on November 5, 2013. The set includes the complete adventures of the Ninth Doctor (Christopher Eccleston, Thor: The Dark World) and Tenth Doctor (David Tennant, Broadchurch, Fright Night), available in newly remastered Blu-ray versions at full 1080p resolution for the first time ever, sitting alongside those of the Eleventh Doctor (Matt Smith) in this high definition collection. The Home Entertainment team has gone above and beyond to bring fans the best possible experience, and have also fully remastered the complete Tenth Doctor Specials as well as The Complete Fifth and Sixth Series (previously available on Blu-ray), to full 1080p resolution as well. Throw in the new Doctor Who: The Complete Seventh Series Blu-ray set along with hours and hours of bonus features from the past collections PLUS 120 minutes of bonus material that has never previously been available on disc, as well as more goodies than you can shake a sonic screwdriver at, and this is one blue box that just might actually be bigger on the inside.

And speaking of sonic screwdrivers…

“Who looks at a screwdriver and thinks, ‘Ooh, this could be a little more sonic.’?” – Captain Jack Harkness

Any fan of Doctor Who will be glad to tell you that all screwdrivers could stand to be a bit more sonic. And that’s why we’ve included the original Doctor Who Universal Remote Control Sonic Screwdriver, a gesture-based remote control replica of the Eleventh Doctor’s trusty tool, in the Doctor Who: The Complete Series 1-7 Limited Edition Blu-ray Gift Set.  Crafted from real metals and featuring sound effects from the show, you can impress your friends when you turn on your television with a wave of your hand and feel like a Time Lord yourself.

With 29 blu-ray discs of episodes, specials and bonus features, plus the Universal Remote Control Sonic Screwdriver, 3 exclusive art cards and an exclusive comic book, this limited edition gift set will keep on giving for years to come.

Other additional items include:

BBC Worldwide is the main commercial arm and a wholly-owned subsidiary of the British Broadcasting Corporation (BBC). BBC Worldwide Americas brings together all of BBC Worldwide businesses across North and South America. The company exists to maximize the value of the BBC’s assets for the benefit of the UK license payer, and invests in public service programming in return for rights. The company has five core businesses: Channels, Content & Production, Sales & Distribution, Consumer Products and Digital.  Under these businesses fall two key brands in the U.S. – digital cable channel BBC AMERICA and BBC Worldwide Productions, the production arm responsible for the smash hit Dancing with the Stars.