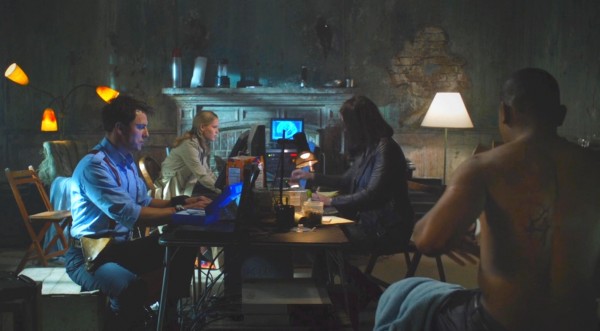 The team is on to Friedken and get his “mystery phone” through which he’d been getting instructions from the triangle.  This episode mainly focuses on two things:  Peeling back a few layers of the mystery which ties Phicorp to the miracle and re-forming the Torchwood team by adding some new members, one of whom is often less than cooperative.

There’s a little fun with Esther serving as “translator” for the differences between US and UK English.  In fact, there were a lot of good natured “Brits-vs-Yanks” jokes early in this episode.  They were funny and also helped bridge some of the language gaps if you’re not familiar with common differences like “chips” in the US are “crisps” in the UK.

The team find out Friedken is hiding information about a warehouse in DC from the ATF.  They break in and find it’s a huge Phicorp stash of painkillers, just what experts like Dr. Juarez were saying would be needed with nobody dying.  Logs indicate shipments going back over a year, so Phicorp knew the “miracle” was coming for at least that long.  When they discover how big the inside of the warehouse really is, Jack makes a comment about it being bigger on the inside.  Nice, but not necessarily unexpected. 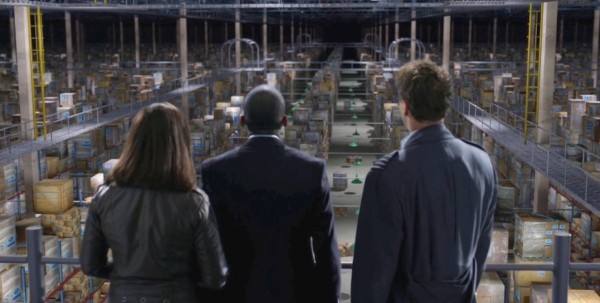 Rex convinces Dr. Juarez to take Jilly Kitzinger up on her offer to attend a big Phicorp meeting.  Maybe they can begin to figure out what the company is up to and who’s behind the miracle.  While the meeting is taking place, Gwen gets access to the building and uses the Eye-5 contact lenses that act as tiny wifi cameras to do some spy work.  Juarez learns that Phicorp has worked a deal with the government to allow all drugs to be sold without a prescription, a huge boon to profits for the company.  Meanwhile, Gwen steals information from Kitzinger’s office.  While she’s in the building, she also spots Oswald Danes with Kitzinger, who takes the killer to meet with three mysterious figures.

Sitting back at the Torchwood temporary hideout, Friedken’s red phone rings.  Rex answers it.  There’s nothing but silence on the other end and Esther can’t trace the origin.  To Esther’s confusion this makes Rex happy.  He says they’ve made someone nervous so they must be on the right track.  The pair gather everything and make plans to relocate since their location has been compromised.

A little later, Jack sneaks into the television station where Oswald Danes is about to make a live interview.  Alone with Danes, he records the man talking about how he actually enjoyed killing a child.  Jack plans to broadcast the recording, but Danes has since received protection from Phicorp.  He’s taken away by big pharma goons who beat the crap out of him while Danes becomes a mouthpiece for Phicorp who have apparently let him in on the big secret. 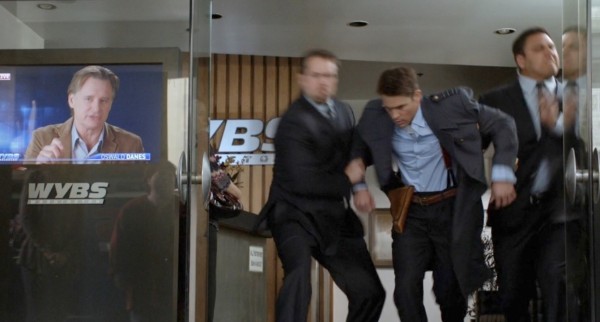 Three episodes in and the series is still setting the stage for events to come.  Unlike previous Torchwood series, Jack and the team are still almost completely in the dark even though the run of Miracle Day is about 1/3 complete.  One common complaint about this series when it originally aired was that it moved at a slow pace.  When I watched Torchwood: Miracle Day the first time I pretty much agreed with that assessment, but as I re-watch it I’m not getting that feeling quite as much.

Torchwood: Miracle Day might drag a little in places, but it’s better than many critics made it out to be.  I think any story that followed the 3rd series, Children of Earth, would have faced the same criticism.  CoE was a tense story told in only 5 episodes that aired over 5 consecutive nights.  That built a level of intensity that is hard to keep up with 10 weekly installments.  So far, Miracle Day is pretty compelling and I’m actually enjoying some of the “Americanization” of it because they’re having fun with the changes.  That’s something viewers on both sides of the ocean should enjoy.

Tune in to BBC America Saturday nights at 9/8c for Torchwood: Miracle Day.