Who’s News: Behind The Scenes Pic From “The Day of the Doctor” & Promises of More! 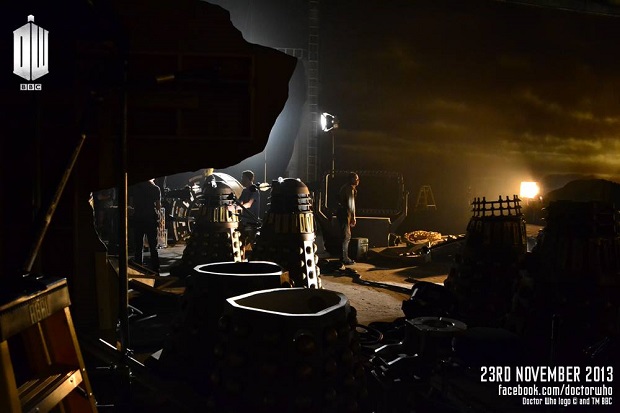 The BBC just posted this behind-the-scenes image straight from the set of The Day of the Doctor.  Sure, it’s only one image, but they’re promising more very soon.  While those of us in the US will have to wait until November 23 to see the new original series Atlantis, it’s premiering on the BBC tonight.  Before and after that broadcast, they’re promising “stings” (which I imagine are brief video snippets, probably of the full trailer, designed to drive us bonkers) and a hashtag we can begin using to show our support.  Once those go online to share we’ll bring them to you, so keep watching this site!

Here’s the full text of the post on BBC’s Doctor Who blog page:

Tonight, immediately before and after the brilliant Atlantis (BBC One, 8.25pm) there will be ‘stings’ for The Day of the Doctor that reveal the ident which will be used for the episode, plus a hashtag that (hopefully!) you’ll soon be very familiar with…

We recently announced a raft of programmes that will be help celebrate the Doctor’s anniversary but stand by for several surprises en route to the 50th… One of them is a brand new trailer, specially written and shot for The Day of the Doctor. It’s never been seen before and is currently in post-production. Bold, brilliant and unexpected, it promises to be an ideal way to look forward to the big day – 23 November.

We’ll bring you that trailer as soon as we can, but in the meantime, here’s a shot from behind the scenes of its production. And don’t forget to catch the stings tonight on BBC One around Atlantis! If they’re on a little late for you, don’t worry, we’ll have them right here on the official site so you can watch for weeks after they air!

I don’t know what the hashtag is going to be, but I have a suggestion you can all use for now.  How about #WheresTheDamnedDoctorWhoTrailer?  It’s a bit long, but I don’t know a single fan who’s not wondering just that.

Remember, the Doctor returns November 23rd, but ‘Who’ can forget that?