Behind the Scenes Photos From the “Doctor Who 50 Years” Trailer 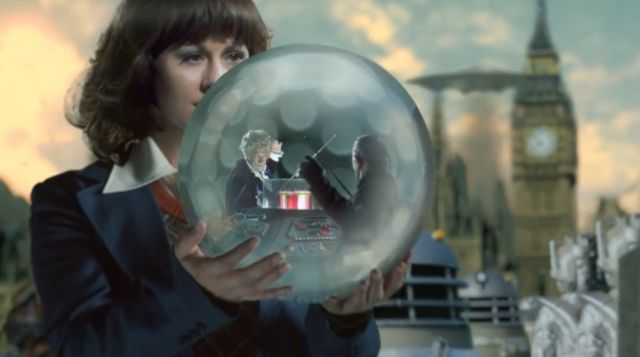 The recently released trailer celebrating 50 years of Doctor Who was packed beyond belief with tidbits from the show’s many, many episodes.  Visually, it was a real treat, not only for all the goodies thrown in, but also for the really neat way the camera moved in 3 dimensions while everything seemed to stand still in time.

If you haven’t seen this truly remarkable trailer then CLICK HERE TO WATCH IT NOW.

How did they do it?  From the just released set of behind-the-scenes photos it looks like there were as many practical/physical props as there were CGI additions.  The BBC has given us six photos showing scenes for the trailer during the set-up phase and they’re as impressive as the finished product. 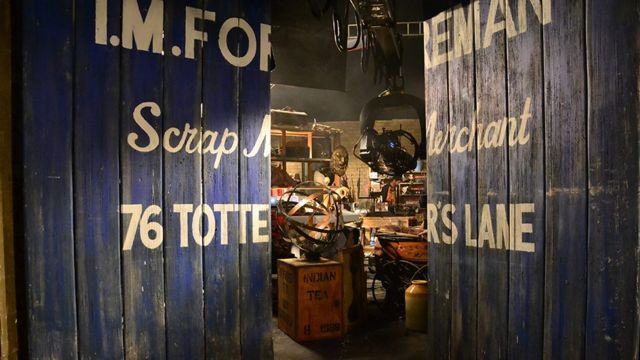 A recreation of the very first scene from the very first episode, An Unearthly Child.  In the opener of the original, we see a policeman walking about, then the camera pans to the doors of the junkyard at 76 Totter’s Lane and moves through them as they open.  What’s inside in the original episode is a bit different from this picture, but it’s a loving nod to the beginnings.

If you’ve never seen An Unearthly Child, I’ve embedded a 95 second video from YouTube user “chicagosundials” showing the opening that the above image pays homage to.  The clarity of the video isn’t the greatest, but it’s a bit of a thrill to see it as a point of comparison and to know those humble black-and-white episodes started a phenomenon that’s going stronger than ever a half century later.

Fortunately, both the composition of the theme song and the quality of video has improved dramatically in 50 years, but I still have a fondness for these “classic” episodes. 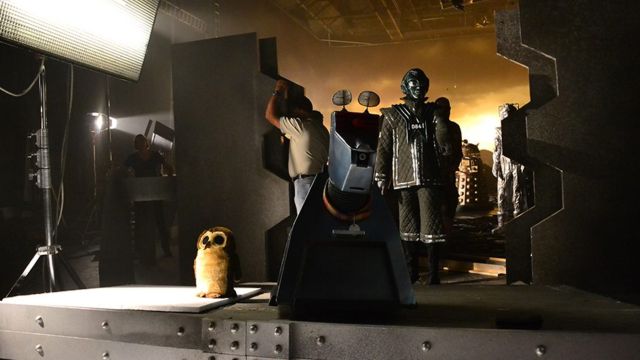 This picture has everyone’s favorite mechanical dog, K9 along with Sarah Jane’s toy owl, the D84 from The Robots of Death.  In the background a Cyberman and Dalek wait to pounce on your face. 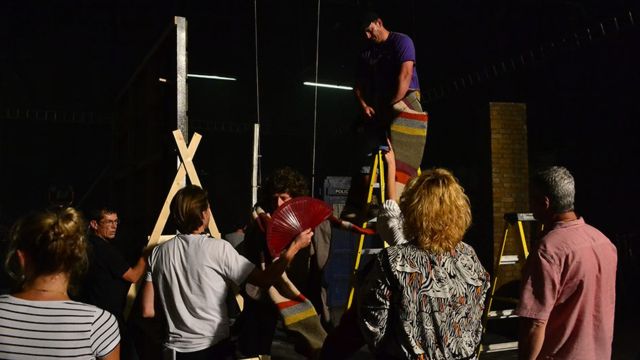 Here we have a bevvy of workers preparing for the Great Jelly Baby Explosion scene.  After looking at these photographs one of the things I found surprising is it looks as though they’re using wax figures of the older Doctors.  I’m not certain they’re wax figures, but there’s a guy with a fan and it looks like he’s fanning the face of the Tom Baker figure, plus there’s a couple of cables that appear to be holding him (it) upright. 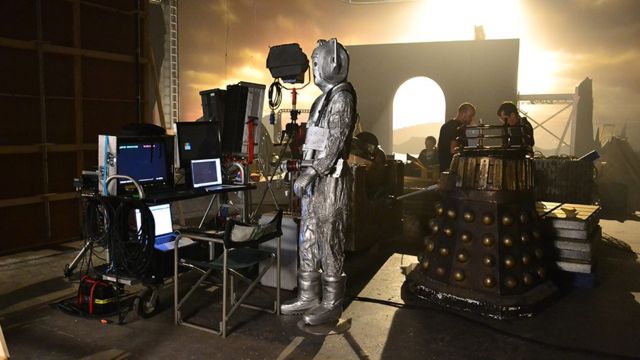 Here’s an 80s model Cyberman standing by a busted Dalek.  You can also see the background of the canyon and the skyline which appear to be practical effects as well. 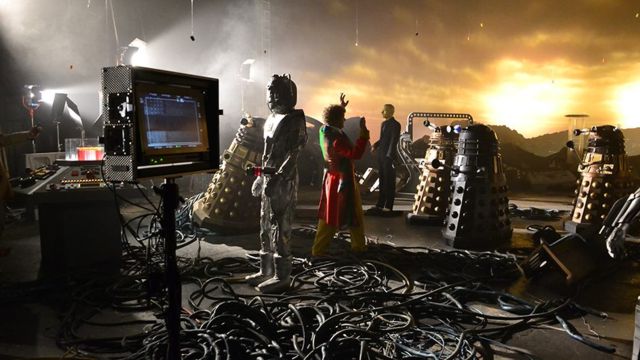 Doctor number 6, Colin Baker, raises his hands as he’s confronted by those pesky Daleks while an Auton and that semi-retro Cyberman just stand about like they’re waiting on a train.  Here you get an even better view of the background skyline and how beautiful it looks as a practical effect. 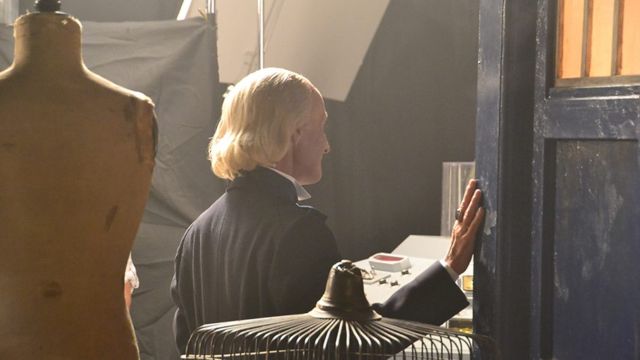 Lastly, we see first Doctor William Hartnell standing in the junkyard on Totter’s Lane with his hand on the TARDIS.  Again, this seems to be either a lookalike possibly with CGI enhancements to look exactly like Hartnell or some form of wax figure.  I’m still going with wax figures for these scenes, but I’d really like the BBC to give us an in-depth rundown of how all of this was put together.

If we’re lucky there will be much more information on the making of this trailer.  There’s so much Doctor Who history crammed in here and the end product was so very impressive that I’d like to know all about how it came to be.  If anything more is released by the BBC we will bring it to you ASAP, so please keep checking back for everything Doctor Who!