Broadchurch Gets U.S. Remake On Fox – David Tennant To Star 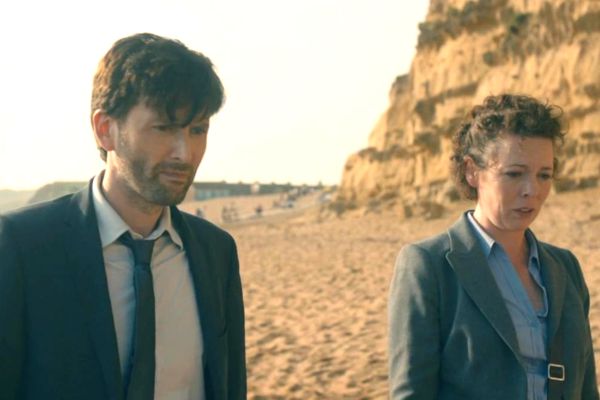 File this under Good News/Bad News.

Even though it’s already been announced that the ITV original drama Broadchurch is getting a second series, American broadcast network FOX has announced they’re remaking the show.  On top of that, they’ve snagged David Tennant to reprise his role as Detective Alec Hardy, but according to Deadline.com he’s going to be an American detective.

Now, whether that means Tennant’s going to play a Scotsman who moved to America and works for a local police department or if he’s scrubbing his accent in favor of an American one is unclear.  On top of that, FOX may not keep the title Broadchurch for their version, but is currently using it as a working title.  Added to the pile of unknowns is whether or not Tennant will be available for ITV’s second series of Broadchurch, which is expected to find it’s way to American televisions via BBC America.

On the bright side, original series creator Chris Chibnall will serve as executive producer.  He will also write the premiere episode of the FOX version so there’s hope this version will retain the quality of its predecessor.  Another fact I consider good news is that FOX’s version is planned as an 8-episode “event series” which is the same number of installments as the original and hopefully means no room for filler episodes.

Here’s a snippet from Entertainment Weekly’s interview with Chibnall:

The UK version is planning a second season of Broadchurch, but it has not been announced whether Tennant or his co-star Olivia Colman will return with it. Last month, Chibnall told EW that Fox is giving him the opportunity “to make something that is hopefully as good if not better than the British version.” “I’m very, very fascinated to see this story in a different landscape with an acting ensemble that’s just as strong but taken from really great American actors,” he said. “The DNA of the original is absolutely intact and filtered through a new prism, so it should still feel just as vibrant, and interesting, and strange, and unique, and beautiful, but just in a different setting — and then it’s exploring the dramatic opportunities that that offers up. We’re not gonna do the terrible version. We’re gonna do a great version.”

American remakes have been very hit-or-miss over the years.  Unfortunately, they’ve been more “miss” than “hit,” but with the recent success of Being Human along with the inclusion of Chibnall and Tennant I’m keeping my chin up.  For now.

FOX’s press release regarding their version of Broadchurch:

Boldly continuing its push forquality long-form event series, Fox Broadcasting Company (FOX) announced today aseries order for BROADCHURCH (working title), an American version of the theU.K.’s most-watched new drama of the year. Produced in partnership with ShineAmerica, and to be executive-produced by the original series’ creator, ChrisChibnall (“Dr. Who,” “Camelot”), the gripping crime series is scheduled tobegin filming in January, for broadcast during the 2014-2015 season.

Set in an American town, BROADCHURCH(wt) follows the tragic and mysterious death of a young boy found dead on anidyllic beach surrounded by rocks and a jutting cliff-face, from where he mayhave fallen. Although the cause of his death remains unsolved, the picturesqueseaside town where the tragedy occurred is at the heart of a major policeinvestigation and a nationwide media frenzy.

Chibnall will write the premiereepisode and executive-produce the series with Shine America’s Carolyn Bernstein(“The Bridge”) and Jane Featherstone (“The Hour,” “Utopia”) from dramaproducers Kudos.  The series will bedistributed by Shine International.

“BROADCHURCH is the kind ofstorytelling that grabs your attention and keeps you riveted with every minute– which is exactly what we look for in an event series,” said Kevin Reilly,Chairman of Entertainment, Fox Broadcasting Company. “We love the layeredcharacters, we’ve seen how well-received it’s been in the U.K., and we’re luckyto be able to bring a new version of this mystery to the U.S. audience.”

“We are thrilled that thiscompelling series from creator Chris Chibnall and our sister company Kudos isgoing to be adapted for the American TV audience,” said Rich Ross, CEO, ShineAmerica. “And FOX is the perfect partner to help make BROADCHURCH (wt) an eventhere in the U.S. as it was earlier this year for millions of British viewers.”

Jane Featherstone, ChiefExecutive, Kudos, added: “I am delighted to be working with Chris and everybodyto bring BROADCHURCH’s (wt) unique voice and vision to a new coastline,community and culture.”