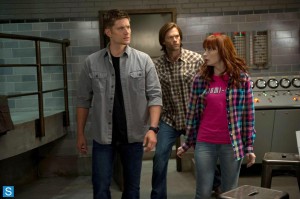 “Slumber Party: Sam and Dean meet Dorothy from oz and the wicked witch when they locate an ancient computer in the Men of Letters house that dislodges a hidden hex bag that in turn unleashes a magical green-webbed wall.  Dorothy became trapped in the web years ago.”  ~ ComCast Preview Guide

“Episode 9.04 of Supernatural will be called “Slumber Party”.  The episode will feature a flashback to the 1930’s with a character called Haggerty.  It will also feature a huntress called Dorothy.”  ~  spoilertv.com

Well how interesting.  It seems quite popular for shows now-a-days to jump into fantasy worlds like Oz and Wonderland and it appears that Supernatural will be joining it, but doing so their way.  I think it will be interesting to see Dorothy as a huntress.  It also appears that Felicia Day will be returning as our favorite Geek-girl so we know this will be a fun episode.  I am looking forward to it.  How about you?