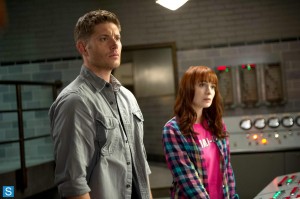 We are in the past right after the bunker the Men of Letters built.  A time where the saying Topsy Turvey is used and there are clean-cut men named Jenkins and Haggerty, who are assigned to be the watcher of the bunker.  After the novelty of the bunker wears off on Jenkins he begins to long for adventure but Haggerty tells him there is nothing worse than adventure.  They get a call from Frank’s daughter,  a famous Huntress, Dorothy from Oz.  She has come seeking help with killing the wicked witch.  The Men of Letters come up empty and when the witch escapes Dorothy asks if they have a lab and when told yes and where she disappears.  The witch possesses Jenkins, who attacks Haggerty leaving him no choice but to kill him.  When Haggerty goes to look for Dorothy she and the witch are both gone.

In present day Sam is still trying to get more names of demons from Crowley, who is trying to negotiate for a room with a view or to at least stretch his legs, and look for a way to save Cas.  He doesn’t understand why Cas let and Dean lies, again, and tells him that Cas didn’t want to bring danger down on them.  Sam has an idea on how to use the table, that lit up when the angels fell, to track angels so they can give Cas heads up. 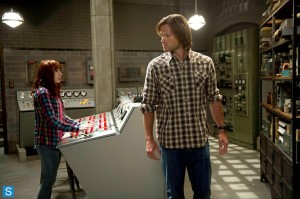 Now spilling mysterious goo all over is never a good thing, but Dean manages to just that when trying to pry the back off a computer that Sam found when following wires from the table.  When the boys are unable to figure it out they call in reinforcements….Charlie!  We learn that she has many hobbies since we last saw her: LARPing, Macramé, and Hunting.  She took down a ghost and a teenage vampire, but she longs for a quest and for hunting to be magical.  She is amazed by the computer but isn’t sure how to use it to track angels.  They take a break and watch the show Game of Thorns but when she asks Sam why he hasn’t moved in yet it sparks a small debate between him and Dean. 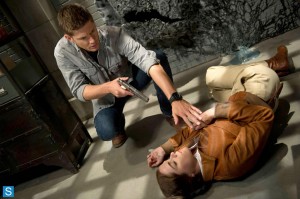 When they go back to the computer room they find a big grey pod on the wall.  Dean cuts it open and Dorothy spills out.  The gang learns that Dorothy had to protect the world and Oz from the witch so she did a binding spell, but the price of the spell is for her to trapped with the witch.  Dorothy is concerned because if she is awake then the witch is too and last time she saw her she was searching for something. 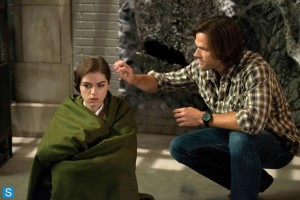 The boys tell the girls to stay put while they go have a looksy and while they are gone Charlie learns that L. Frank Baum, the author of the Oz books, is Dorothy’s dad and that most of what he wrote in the books didn’t really happen like it was written.  Charlie is feeling discouraged that Dorothy is ruining her childhood.

Finally Crowley is able to negotiate after the witch finds him and tells him what she is looking for.    She is looking for a key that will open any door to Oz.  Dorothy fears that once she does that she will head back to Oz and finish the destruction she started.  Dorothy shows them a picture of the key and Dean tells them that it is in his room.  He and Charlie go to find it and Sam and Dorothy search for the witch.

Dean tries to get Charlie to go into the Dungeon, for safety, but she refuses saying this was her time for a quest and to fight wicked witches.

After the witch runs into Sam and Dorothy she ambushes Dean and Charlie in his room.  She tries to kill Dean but Charlie jumps in front of him, but not before the witch grabs the key.  Dean is also able to shoot at the witch and wound her with a poppy bullet that Charlie made.  Sam runs into the room and Dean calls to Zeke who surfaces immediately.  Charlie is dead and Dean wants Zeke to bring her back.  The angel discourages him because he is only at half power and if he keeps doing these things he will be inside Sam much longer then he or Dean would like.  When he sees that Dean isn’t going to back off he gives him a choice to help with the witch or bring Charlie back.  Dean choose the latter and then has to lie to both Charlie and Sam about how everything went down.

The boys set out to find the witch again and after Charlie tells Dorothy about her dream she tells her that she was dead and that she had been resurrected.  Charlie being Charlie buys it and on their way to catch up with the boys the books and Dorothy’s dad is brought up again.  Dorothy doesn’t have a good feeling about her father, but Charlie gets her to see that the books were clues her father left her to help on her mission.  Then Dorothy remember something that can stop the witch and they head to the garage and to her bike where they retrieve the famous red shoes.  They hold magic from Oz and can stop the witch. 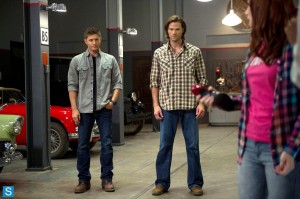 The witch gets the drop on the boys and possesses them to after and kill the girls.  They make their way to the garage while the witch sets up her spell to open the door.  The witch revels, though the boys, that she isn’t planning on going back to Oz, but she is going to bring her army to our world.  Dorothy distracts the boys allowing Charlie to escape and go after the witch.  Charlie is able to take out the witch, by stabbing her in the head with the heels, just in time for Sam and Dean to not kill Dorothy.

it is time for the girls to say good-bye.  Sam presents Dorothy with the book The Wizard of Oz and even though she isn’t thrilled to have books written about her she takes it.  Charlie confronts Dean about bringing her back from the dead and he convinces her to keep it between them and she agrees, but tells him he will have to explain at some point.  Then Dorothy asks Charlie if she wants to go to Oz with her, so she can finish the revolution she started, and Charlie’s need for adventure and fantasy is great and she agrees.  Dean isn’t crazy about the idea, but nothing will stop Charlie and the women walk through a door to Oz.

I have to admit that so far this has been my favorite episode.  It was fun, Charlie returned, and it brought stuff from many of our childhood’s up and we were able to reminisce in a strange way.

Until next week my fellow Winchester fans…..be safe and happy!!

Favorite quotes of the week:

“Can we be best friend’s now?”  Charlie to Dorothy after she is revived.

“Now heel.”  Charlie to the Wicked Witch when she killed her with the red shoe.

“Ding-Dong Bitches.”  Charlie to Sam and Dean after the witch was killed.