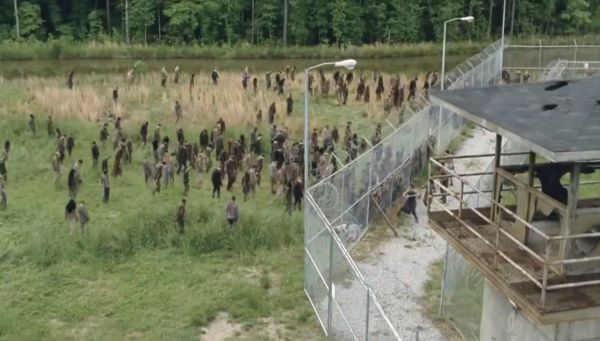 In news that comes as a surprise to exactly no one, AMC has announced The Walking Dead has been renewed for a fifth season.  With ratings that continue to climb, the zombie thriller is firmly on track to take over the world in much the same way the mysterious virus took over the undead in The Walking Dead.

While I have been less than impressed by the show’s recent offerings it seems my opinion is in the vast minority.  Heck, I still watch the show and enjoy it to some extent, though not like I once did.  Even if I hated the show, I’d be happy for fans because I know the heartbreak of having a beloved show yanked from the air before its time.

AMC Renews The Walking Dead For a Fifth Season

New York – October 29, 2013 – AMC announced today that it has renewed The Walking Dead for a fifth season. The number one show on television among adults 18-49,The Walking Dead returned for a fourth season earlier this month and the premiere episode set a new record for the series, delivering 20.2 million viewers, live+3, and 13.2 million adults 18-49, a new record for any non-sports cable telecast.

“We are very happy to make what has to be one of the most anti-climactic renewal announcements ever:  The Walking Dead is renewed for a fifth season,” said Charlie Collier, AMC president. “This is a show that has erased traditional distinctions between cable and broadcast. Its expanding base of passionate fans has grown every season, most recently – and most notably – with the season four premiere earlier this month, which broke viewership records for the series and became the biggest non-sports telecast in cable history. On behalf of the incredible team on both sides of the camera, thank you to the fans and here’s to more Dead.”

For season five, Scott Gimple will return as the series’ showrunner along with executive producers Robert Kirkman, Gale Anne Hurd, David Alpert, Greg Nicotero and Tom Luse. AMC also recently announced that it is developing a companion series to The Walking Dead, based on a new story and new characters from Robert Kirkman.