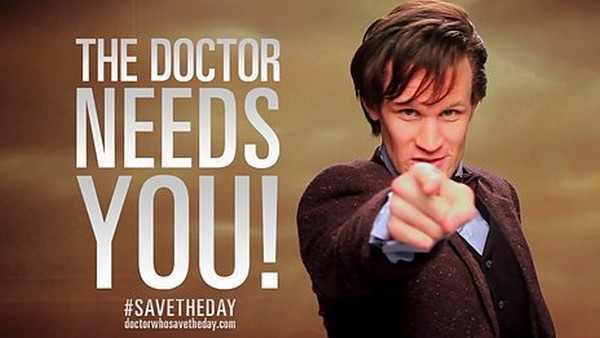 We all know this is Doctor Who‘s 50th anniversary.  And what better way to celebrate the 50th than with a first?

At 2:30 pm ET, BBC America will be broadcasting the Doctor Who 50th Live Pre-Show, but they’re not leaving international fans out.  In fact, that’s where the “first” comes into play.  The pre-show will be simulcast on YouTube for the entire planet to see.

I know there’s a lot of frustration over television shows that are limited to viewing only in their country of origin while the rest of the world has to wait.  BBC America is proving yet again that they really do love their fans by making this broadcast available to the world at the same time it’s broadcast in America.

Doctor Who has become a show that’s changing the landscape of global television for the better.  Hopefully, networks will emulate this groundbreaking move by BBC America to finally give fans what they want, when they want it.

And now for that press release…

DOCTOR WHO 50th LIVE PRE-SHOW CROSSES PLATFORMS TO CONNECT FANS IN THE U.S. AND AROUND THE WORLD

New York – November 19, 2013 – Announced today, BBC AMERICA has partnered with Nerdist Industries to celebrate the 50th Anniversary of Doctor Who with the first ever live simulcast pre-show from the YouTube Space Los Angeles. Hosted by Veronica Belmont, the Doctor Who 50th Live Pre-Show will air November 23, 2:30pm ET on BBC AMERICA and stream to audiences globally on BBC AMERICA’s YouTube channel (youtube.com/bbcamericatv) just prior to the premiere of Doctor Who’s 50th anniversary special Doctor Who:The Day of The Doctor at 2:50pm ET.

Doctor Who 50th Live Pre-Show will be an all-out celebration of 50 years of Doctor Who and its passionate fans. As the world awaits the global simulcast of the anniversary special, the pre-show will feature a live curation of fan-created content being shared on social media from celebrations around the globe, plus chats with special guests including YouTube star Phil DeFranco.

Perry Simon, General Manager, BBC AMERICA commented: “Doctor Who has an amazing social media following and is enormously popular, with millions of views on YouTube. Partnering with YouTube on an innovative pre-show will enable fans everywhere to join our celebration of this groundbreaking series’ 50thanniversary.”

“We’re very excited to work with BBC AMERICA and Nerdist on this first ever simulcast from YouTube Space LA and are looking forward to welcoming Doctor Who fans and YouTube talents for a truly innovative pre-show experience connecting communities all across the world,” said Liam Collins, Head of YouTube Space LA.

Veronica Belmont, co-host of the science fiction and fantasy YouTube video show, audio podcast, and book club The Sword and Laser, added: “I’m happy to report that the live pre-show went off without a hitch, and that fans everywhere thoroughly enjoyed The Day of the Doctor. At least, they did in the time stream I just came from.”

BBC AMERICA is the U.S. home of Doctor Who and has been celebrating the 50th anniversary of its highest rated series throughout the year. Doctor Who Live Pre-Show is part of BBC AMERICA’s Doctor Who Takeover, a week of new programming and marathons. The anniversary of television’s longest-running sci-fi series is a global celebration, as Doctor Who will be simulcast for the first time in more than 75 countries. Written by Steven Moffat, Doctor Who: The Day of The Doctor stars the Eleventh Doctor, Matt Smith, the Tenth Doctor, David Tennant, companion Jenna Coleman, with Billie Piper and John Hurt.

The Day of the Doctor airs November 23rd and don’t forget to #SaveTheDay!