Monroe and Hank are still tracking Nick through the woods around the bar. Nick hears and then sees a family getting home and entering their house, and he takes off after them. The frightened people barely manage to get in the house before he gets there, but he soon breaks down the front door. The family quickly runs into the master bedroom, where the husband and wife have moved a bookshelf in front the bedroom door and put their children into the closet. The husband tries to get his handgun out of his gun safe. Hank and Monroe are close enough behind Nick that they hear the family’s screams and follow the trail of destruction up to the second floor of the home. They arrive just as Nick breaks down the door and mostly manage to keep him from harming the husband. At one point, Hank throws a statue, hoping to hit Nick in the back of the head – and Nick turns at the very last minute and catches it, without seeing it. Both Hank and Monroe are freaked out by this, but they taunt Nick into following them out of the house and lead him to a barn at the back of the property. 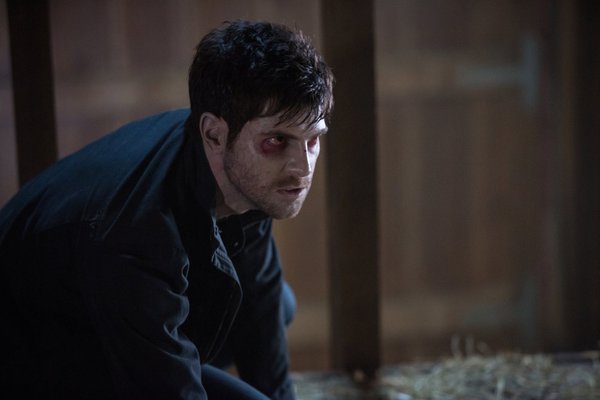 Renard calls Hank to find out if they’ve got Nick, and Hank tells them where they are and that they need help. Hank and Monroe lure Nick up into the hayloft, where he falls through the rotting wood into a stall and is temporarily locked up. Renard, Juliette and Rosalee arrive in time to see the husband stagger out of the house with his gun. He still wants to shoot Nick, but Renard tells him to go back into the house. Once he hears Nick yelling again, he does just that. The other three head to the barn to deal with Nick, who has gotten out of his cage. Renard and Monroe know human strength isn’t enough, so they voge and manage to slow Nick down enough that Juliette and Rosalee manage to give him the shot. They get Nick into the SUV just before the cops arrive and head back to the spice shop. 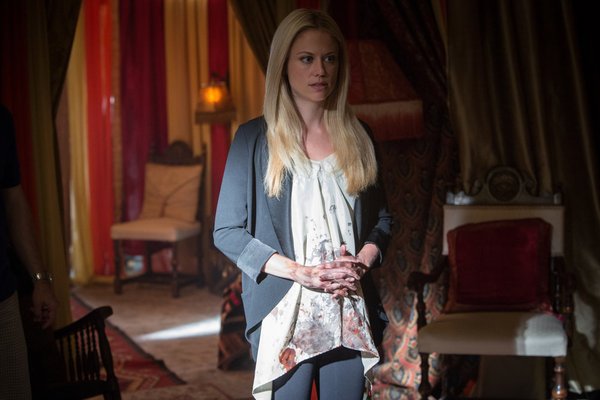 Meanwhile, Stefania and Adalind are continuing the ritual. Stefania tells Adalind that she needs to put the dead flowers into Frau Pech’s body and then sew her back up. When Stefania shakes the flowers out from Adalind’s shirt, they float over and go inside the body. When Adalind finishes sewing, Stefania tells her that she has to cut the gory thread with her teeth.

Rosalee administers another dose of the potion to Nick once the group arrives at the spice shop, just in case one dose isn’t enough for a Grimm. Renard again tells them that he’s taking care of his brother and that he needs to head back to the station. After he leaves, Nick wakes up enough to start moving, and Hank slips handcuffs on him – just in case. and of course can’t remember anything. Juliette, Rosalee and Monroe wait, and finally Nick wakes up – and of course, he can’t remember anything. Juliette shows Nick the six puncture wounds in his stomach to begin the explanation.

As Renard enters the station, he gets a text saying “Done. News online. Link sent.” He watches the report with some satisfaction. He then calls someone in Europe who’s traveling on a train, making sure that he’s on vacation. Just then, there’s a knock on his office door – Sgt. Wu comes in to tell him that one of the men who was injured in the bar fight just died at the hospital, so now it’s a murder, and they need to find Thomas Sherach. Wu also tells him that there’s no surveillance footage – the equipment was destroyed and the drive taken. When Wu leaves, Renard pulls the drive of his pocket and plugs it into his computer, then watches Nick beat up people in the bar. In a flashback, Renard destroys the surveillance system and takes the drive. After watching, Renard puts the drive into his desk drawer and locks it. 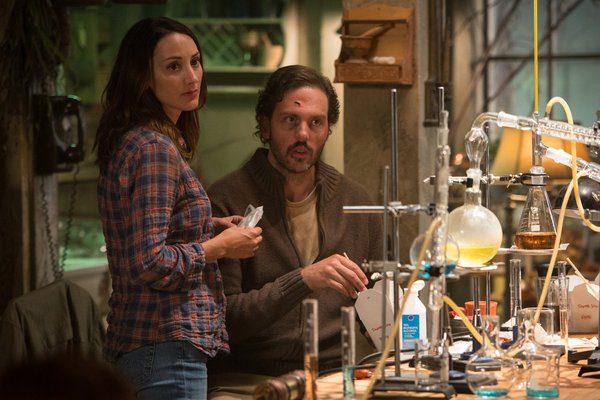 Back at the spice shop, Monroe, Rosalee and Juliette try to convince Nick that what happened wasn’t really his fault. Nick really isn’t buying it, but agrees to go home and rest.

Hank goes in to work, where Sgt. Wu tells him about the one fatality at the bar. He immediately goes in to talk to Renard, who tells him that they’ll need to proceed very carefully and stick to the same story. He knows that both Rosalee and Juliette will be questioned because they were with him at the bar. Juliette is lying in bed, watching as Nick sleeps when her phone rings – it’s Hank, asking her to come down to the spice shop. Renard and Hank are already there when Juliette arrives, and they explain that a man was killed in the bar fight, and the three of them have to have the same story when they’re questioned. No one is happy to have to lie, but if Nick didn’t know what he was doing, it isn’t fair for him to go to prison. Renard also says that Nick doesn’t need to know right now. 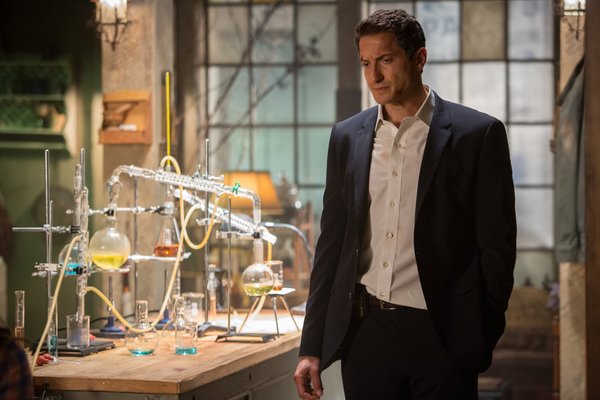 At the station, Hank talks to the two detectives assigned to the murder at the bar, then speaks to Renard again. He clearly thinks that Renard trashed the surveillance system and took the drive, and says that he hopes the drive doesn’t get out. The other two detectives then come in and ask for the names of the women who were with Renard at the bar, and he provides the information.

Later that night, Juliette is in bed with the still-sleeping Nick, when she rolls over to stroke his cheek. She realizes how cold he is, and he won’t wake up. She turns on the light and sees that he looks dead and freaks out, slapping him to get him to wake up. When he still doesn’t respond, she calls 911 – but just then color rushes back to Nick’s face and he wakes up, telling her repeatedly that he’s fine. Juliette isn’t convinced, and she tells him needs to see a doctor. 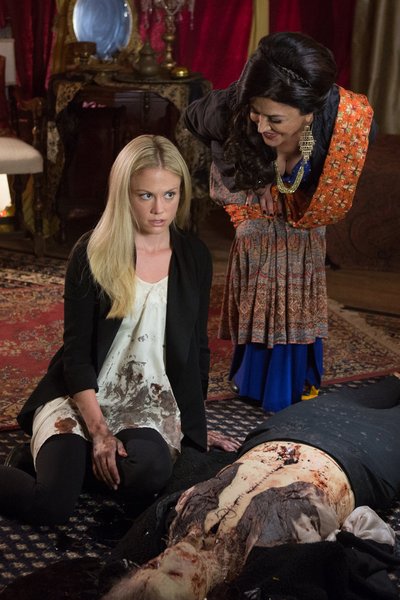 Stefania wakes Adalind up and tells her that it’s time. She then takes a knife and rips open the stitches on the corpse, and something that looks like gooey red innards bubbles out of the opening. She then tells Adalind that it’ll be very good for her skin and the baby. Adalind scoops out the goop and puts it in the jar Stefania gave her. Back at her apartment, Adalind takes off her clothes and begins to rub the goop into her stomach. It glows yellow as she rubs it in, and then a skull forms out of the yellow glow. Adalind looks pleased.

The next morning, Rosalee and Monroe are taking inventory at the spice shop when the detectives arrive to take Rosalee’s statement. She explains that she’s an apothecary, which is why she was trying to treat people who’d been infected by the neurotoxin. After they leave, Rosalee gives Juliette a heads’ up that the pair are headed her way. Unfortunately, Nick’s still home so he answers the door. He asks about why the detectives want to talk to Juliette, and one of them tells him that they need to speak with her because someone died in the bar fight. Juliette hears this as she walks up and invites the detectives in. Nick goes to the kitchen and listens as Juliette explains her part at the bar, then ends up squeezing his coffee mug so tightly that it shatters. The detectives and Juliette come to see what happened, and with a few joking remarks, they leave the house. Nick then gets upset with Juliette for not telling him, saying that if he killed someone, he has to turn himself in. Juliette calls Hank. 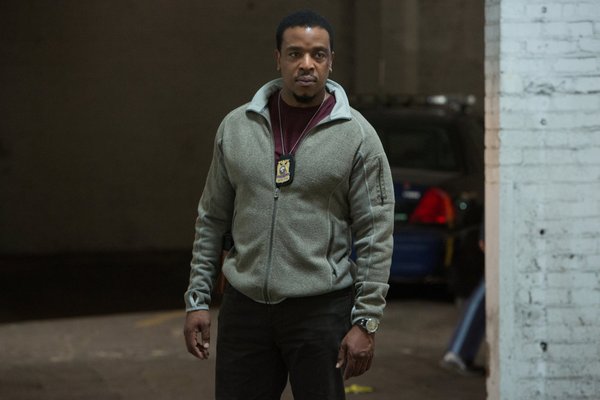 Hank is waiting in the parking garage when Nick drives in. He throws the facts that Nick had tried to kill him, Monroe and the Captain, as well as hitting Juliette, in his face. Then he tells Nick that if he does this, he’s on his own. Nick heads into the station. Renard gets a phone call and it’s his mother – she thanks him for killing his half-brother. Then Nick comes into his office, telling Renard he knows that he’ll try to talk him out of doing the right thing. Renard shows Nick the surveillance video, explaining that if he hadn’t fought back, the man who’d died would have killed him. He also points out that Nick walks in two worlds – he knows what happened, but he couldn’t explain it in a court of law. Renard then tells Nick that the entire thing was something his brother had engineered to capture a Grimm, and if Nick turns himself in, he’ll be doing just what his brother wanted. Nick seems to ponder this, and he walks out into the office. He sees the two detectives, and when one of them asks how he’s doing, he just says okay. 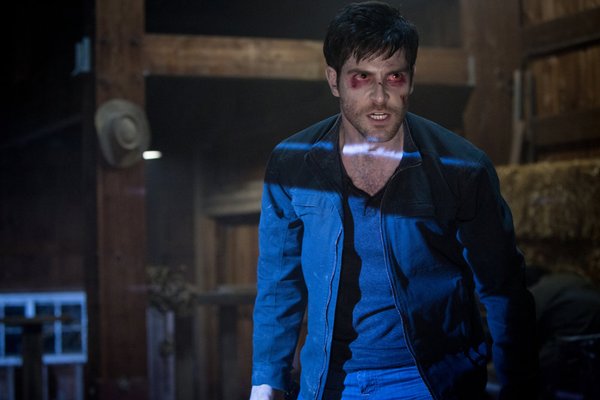 Again, poor Nick. Knowing that he killed someone obviously did a number on him, and even though he’s not going to turn himself in, that internal conflict is going to continue. Will he be able to put it aside enough to get both of his jobs done? If he starts hesitating, that could be a big problem. Also, something else is still going on with him – is he having zombie aftereffects? Will things get worse, and how?

It definitely seems like a lot of people have guessed that Sean is behind Eric’s murder, but will they do something about it? I have to admit, I’m still suspicious – maybe Eric isn’t dead. We shall see! And it was interesting that Sean’s mother called him. Will we finally see her on the show and find out more about her story?

Adalind is getting closer and closer to getting her powers back, which is definitely scary. She didn’t like having to do the many disgusting things for the ritual, but she did them – and is obviously happy with the results so far. It’s not clear if this means her powers are back, or if more is yet to come, but as she’s already done all this, it’s clear nothing will stop her now.

Even though the zombie storyline was a good one, I for one will be happy to move on to new Wesen and new cases! See you back here next week!