Outlander – A Case for NOT Reading the Books First

I love to read. LOVE it. Always have. (I’m currently reading two different books…)  The best Saturday nights I had growing up were when my mom, my dad, me, and at least one of my many brothers would all be sitting in the house somewhere, reading our individual books and getting together in the kitchen to update the others and share a snack. I have a tablet with a Kindle app, and have several books on it, but that’s a backup. Reading – reading a book, a words-on-paper book, is my outlet, my release, my escape. If there’s no book around, I’ll read a magazine. An advertisement. A bill. But a good book—and I’ve found many – can’t be beat.

An Epiphany in Every Chapter

Several years ago, I came across a book called Voyager by Diana Gabaldon, at the library. Within 10 pages, I knew two things – this had to be a part of a series, but not the first book; and that I HAD to find that first book. At that point, this series – the Outlander series – had four books (Outlander, Dragonfly in Amber, Voyager and Drums of Autumn), and I read them all as quickly as I could get them from the library. Then I bought them all, knowing I would want to reread them. I was completely hooked. Since then, three more books (Fiery Cross, A Breath of Snow and Ashes, and Echo in the Bone) have been published, and I have bought and read them as well! The 8th book, Written in My Own Heart’s Blood, comes out next year. I can’t wait. In anticipation, I have reread the first seven books TWICE this year alone (I’ve read tons of other books this year also, but I keep coming back to these). 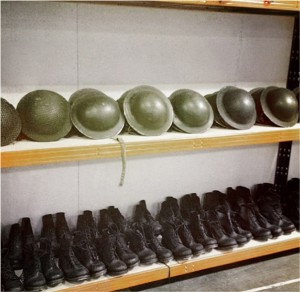 The story is a time-travel, romantic historical adventure that goes across two centuries and two continents. It covers the end of one historic era and the beginning of another. The love between Jamie and Claire, who are forced to marry and then can’t live without each other, has become a bar that many of our real-life relationships can’t meet. I’ve discovered a playful, vocal, extremely intense fan community that I have happily joined, which has enhanced my enjoyment of the books.

And now we’re anticipating this beloved story being translated to television, with the STARZ series coming in 2014. We’ve watched Ron Moore, a great storyteller, pull the threads of this complex and multi-layered tale together, argued and sighed over casting wishlists and realities, screamed and squeed as our favorite author addresses her fandom on Facebook and Twitter, posted, reposted and reblogged pictures of cast members until we’ve broken the Internet (see the picture below – thought the Internets would have a coronary when it came out last week). It’s nuts. It’s fabulous. It’s a bunch of “women of a certain age,” as Ron referred to us, crazy in love with fictional characters, primarily a man most of us will never find in real life. We’re planning trips to Scotland to follow the paths of people who, while fictional, are so well researched that they had real counterparts whose lives we can trace. And I’m sure there are many of us who now know more about Scottish history than the history of our own countries. 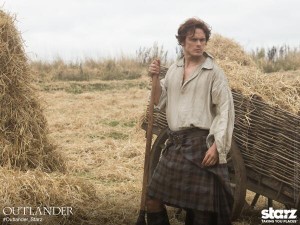 Just Believe Me, Amazon is Sold Out

And yet… if you haven’t read the series, but want to watch the TV series, I’m going to suggest that you not read the books before the show comes out. I can’t guarantee it, but I’m reasonably certain that the series will send you running for your local bookstore – that you’ll have to buy the books anticipating many happy rereads, rather than taking them out of the library (and another reason to buy them – they’re huge! And if you have a life outside of books, there’s a good possibility that you wouldn’t finish them in the borrowing period). 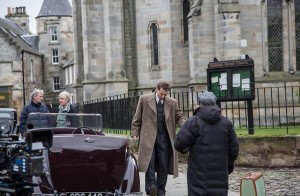 Why? Why should you hold off reading these books that you’ve now heard so much about? Why should you postpone your introduction to the captivating Claire and “king of men” Jamie, sexy Roger and brilliant Brianna, the fascinating Master Raymond, the dastardly Black Jack Randall? Because I want you to love the TV series. I want you to know that, as wonderful as we expect the series to be, as faithful to the books as we’ve been promised it will be, that there’s SO much more you’ll get out of the books — even in 16 hours covering one huge book, it can’t possibly contain every subtle detail, every well-rounded character, and every humorous or heart-wrenching scene that Diana wrote for us. 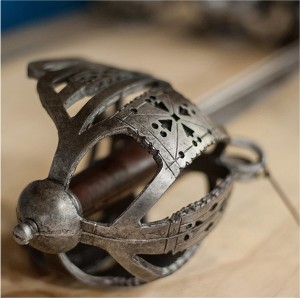 Those of us who have already fallen in love with the series have had years to turn it over in our minds, to become friends with Claire, worry about Ian, laugh at Germaine, and have fantasies of Jamie. We know these books by heart. And if there’s something left out of the TV series, we have it fixed in our minds so we can fill in the spaces and not feel that something’s missing. But if you have read Outlander only once, there are so many details that will not yet have become part of you that I’m afraid you’ll feel their lack during the TV series and not yet be comfortable enough with the details to not mind that you don’t see them on screen. 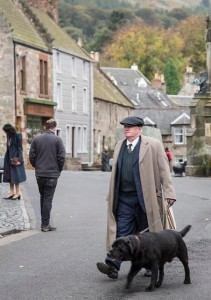 From first days of filming

When I watched the first Harry Potter movies, I had read all the books (written up to that point), but probably only once. I enjoyed the film version of Sorceror’s Stone, but kept looking for all those little details that I had loved in the book, and was critical of the movie for not including EVERYTHING (and ok, you’re saying, but that was 2-1/2 hours of a medium-sized book, not 16 hours covering a big book, and sure they’ll be able to include more details in the Outlander series, but still!). As time’s gone on, I’ve read the entire series several times, and I have become more comfortable with the film versions. I’ve been able to look at them as separate entities – BASED on the books, but not having to be the same (and the Harry Potter movies were reasonably faithful to the books, being shepherded and watched over by the author, who knew better than to allow someone to SCREW IT UP). And everyone I’ve talked with who has a favorite book that’s been turned into a movie has the same feelings, often depending on how many times and how thoroughly they’ve read. 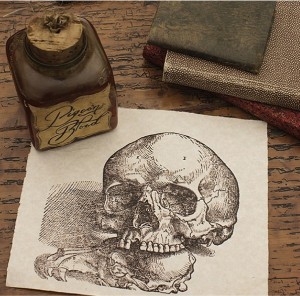 Another big reason why I’d suggest you don’t read Outlander comes out of the heated …discussions, we’ll call them, about casting the show. While, of course, the fans had no real input into casting decisions, the fantasy casting suggestions got more than feisty. And now that nearly all of the major players have been announced, there’s a faction that’s still arguing that so and so doesn’t fit the part, that this one and that one isn’t their ideal Jamie or Claire or Dougal or… And since much of the appeal of this show is falling in love with the main characters, once you have an idea in your head of what they look like, it gets tough to see an actor portray this man (face it, most of the arguing has been around Jamie, the main character) we’ve all fallen heads over heels for. And if you haven’t yet read the book, you don’t know what he is “supposed” to look like – and you’ll fall in love with Sam Heughan, the handsome young actor who will portray our hero, and you’ll be happy. Then, when you do read the books, you’ll understand why the author felt that this was the perfect actor for the role (well, I certainly hope we all feel that way!).

This last point can be illustrated by what happened with another of my favorite book series, one, by the way, that I’ve only read through once – Lee Child’s Jack Reacher books. Reacher is, according to Child, 6’5”, rugged, muscled, tough, not quite handsome. Tom Cruise optioned the books, and played Reacher in the film of the same name last year. Had I not read the books, I probably could have enjoyed the film, not realizing that Tom Cruise was not, and never could be, Jack Reacher. Child came out and said that he was quite pleased with the short star — but I couldn’t bring myself to see this movie. Enough said.

(Well, OK, not quite enough – I do have to say, following my criticism of the Harry Potter movies, that the casting for those films was spot on. Completely. Perfect.)

Placing My Trust in Ron Moore

Having said all that – I HAVE read all the books, several times. And I’m thrilled that it will be a TV series. I’m expecting it to be done right, after listening to the author, the producer, the stars (and they’re quite active on Twitter). I’m prepared to watch Outlander with open heart and open mind, but only because I have internalized so much of the books, and I’m willing to separate my love of the story on paper with what I hope will be my love of the story on TV. Ron Moore has already given us hints that, while he is producing this series for the fans, and understands the burden that’s been placed on him to GET IT RIGHT, there will be changes. We know of at least one character whose small part in the book will be enlarged. We know there will be additional scenes written so that we can be more invested in some of the relationships. We know that there will be some who will still criticize the casting. And that’s ok at this point in my relationships with these books. 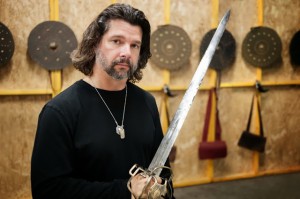 But for you, my newbie friend, I want you to love this story as much as I do. I want you to walk into the grocery store, or work, or the babysitter’s house, the morning after each episode, and not be able to shut up about how wonderful this is. I want you to eagerly await each of the 16 episodes, without that little niggling voice in your head telling you that there was something missing, that this one wasn’t right, that… And then! When you’re completely and thoroughly in love, and Outlander can do no wrong, go spend your money and buy every one of the books. And when you’re reading them, you’ll realize that as fantastic as the TV show was, the books are perfect. Then, when season 2 comes out in 2015, you’ll be ready.