Supernatural – A Rock and a Hard Place Recap/Review

“Well I’ll be a squirrel in a skirt.”  The best line of the show tonight.  Well the boys get a call from their old-time friend sheriff Jody Mills after a young gal is kidnapped by a someone who can actually lift a car off the ground.  Upon arrival Jody tells them about other victims who were all part of the same church and then takes the boys to see Slim, the homeless witness, who tells them when Honor was taken he saw a blue light much like fire, but wasn’t fire. 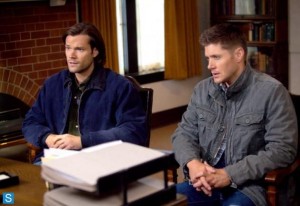 At the church they find out that all the missing people were part of a group called A.P.U. During the interview with the overly nice red-head Sam blurts out that they wanted to join the group and the woman heads to grab the “paper work”.  While she is gone Sam convinces Dean that they need to join because it sounded as if all the victims were virgins so they could be dealing with Dragons.   She hands them each a Purity Pledge to sign and they indicate to her they aren’t pure.  She tells them they can be born again and they sign.  Oddly they used their real names.

Honor finds herself underground floundering around in the sewers.

After the Purity meeting, where Dean “cleansed” and made all the women aroused, Sam engaged in conversation with a goody-two-shoes named Tammy and Dean with a woman name Suzy.  Dean’s offered him personal counseling and he leaves the Church and walks Suzy home.  Sam learns from Tammy that both Honor and Pastor Fred (another missing person) had broken their chastity vows and that they were going to hell.

Back at the motel Jody shared with Sam that the other missing people, Barb and Neil; an engaged couple, went missing about an hour after her mom heard them “breaking their chastity” and seeing a blue light from under their door.  Sam crossed Dragons off the list and Jody is shocked to hear that Dragons are a thing.  They also have a chat about church and Jody reveals that she likes church.  After Bobby and Crowley she needed a place to feel safe.

Honor finds the other missing people.  Pastor Fred is on the floor in bad shape.  When she asks Barb and Neil what is wrong with him they tell her he is starving to death and that is going to happen to all of them if they can’t get out of there.  Then their captor shows up and emits a blue light into the room.  When it dissipates Pastor Fred is gone. 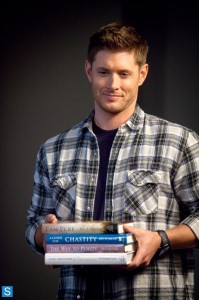 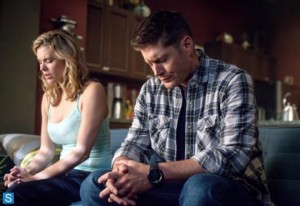 When Dean is gone too long Sam and Jody go to find him, but they are too late as the person with the blue light has taken Dean and Suzy.

Sam and Jody are frantically doing research and Jody stumbles on the answer: Vesta the Roman Goddess of the Heart, and to kill her Oak with virgin blood.

Dean finds himself with the other underground somewhere.  He is able to get a call out to Sam, but the connection is bad, but Sam does hear a whistle.  Jody brushes her fingers over the computer keyboard and finds the farm they need to go to.  On their way they stop to ask Tammy for her blood and when she begins to bellyache about them being pagans Jody punches her and takes some of her blood. 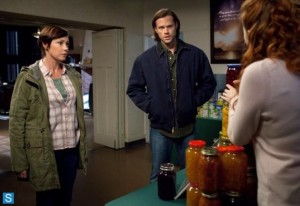 At the farm they find the tunnel pretty quick but Vesta, who turns out to be the overly perky red-head,  finds them and Sam, who is still pretty weak is knocked out.  Jody holds her own with Vest, but she isn’t a trained hunter and Vesta begins to strap her down to a table intending on having a feast of her liver.  Jody gets one arm out and tries to stab the goddess with her weapon but she isn’t fast enough.  Vesta grabs it from her and as she plunges it into Jody’s chest Sam grabs her from behind.  She is able to overtake him pretty quick, but as she tries to take what she wants she begins to yell at him about him being duck taped inside and she doesn’t understand how he can even be alive.  This distraction allows Jody to get free, the wound she sustained was not deadly, and offs our villain.

Dean, who had been working on the hatch, emerges asking what he missed.

Jody departs and as the guys pack up they have one of those famous Winchester talks.  Sam is bellyaching about how he is broken and Dean is telling him that is only because of the trials.  Sam is beginning to think there isn’t anything to blame for his brokenness and right before Dean tells him about Zeke, Sam’s inner angel appears and warns Dean that Sam isn’t ready.  When Sam comes to Dean just tells him that if there is something to blame it isn’t his fault and they will figure it out.

This was a great episode.  I really enjoyed seeing Jody Mills again, but at the same time it made me miss Bobby that much more.  I have to say it yet again: Season 9 is shaping up to being a wonderful season.

Well Until next week, which is the mid-season finale, be safe and Happy.  For those of you that celebrate the Thanksgiving Holiday have a warm and loving holiday.

“Ready to get your Worship on?”  Dean to Sam when decided to check out the church.

“I don’t think we can Un-ring that bell.  If you know what I mean?”  Dean to the woman at the church right before he signs the Purity Pledge.