Well my excited socks are on as the opening credits start rolling.  We get a wonderful montage of Dean being the big brother we all know and love who is out to look after and protect his younger brother Sam.  This episode should be good.

Didn’t your mother warn you not to play around farm equipment?  I think as an elderly man is chasing some kids into a barn trying to get them to bed.  It’s a shame when he is impaled by a tractor that came to life all on its own after the barn suddenly became very very cold.  Yep we fans can tell the signs of a ghost.

Back at the bunker Sam thinks he is alone and is about to sit down with a book called “The Wondrous Oz” (or something like that) when Dean’s phone begins to ring.  Telling the caller there is no D-Dawg there Dean walks in taking the phone from Sam and greets the caller as Sonny.  Once their conversation is done Dean tells Sam that when he was sixteen and dad shipped Sam to Bobby’s for a couple of months Dean was in a home for boys after losing their food money in a game of cards and getting caught stealing food to feed Sam.  Sam is shocked and isn’t sure why Dean and John didn’t tell him the truth.  Dean isn’t sure either.  All he knows is that it was papa Winchester’s idea.  Dean tell Sam that Sonny, the guy who runs the boys home, knows what they do and has a case for them, and off they go to New York. 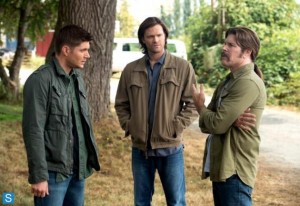 While the boys wait for Sonny in the living room, after being greeted by a stern housekeeper, Dean has a flashback of arriving at the home.  He remembers being mouthy to the cop, whom he gave a black eye to, and Sonny being pretty cool and accepting him with open arms.

The boys look around the farm.  Where Dean meets a little boy named Timmy who tells him about the old man’s death and how it got really cold before it happened and Sam almost gets the drop on…dun dun dahhhhh….Ruth.  She tells him she knows that there is a ghost and tells him a story of a man who killed his wife on the property and then later died and said he would have his revenge on the guy who died in the beginning.  To the cemetery they boys go and burn the guys bones.  Thinking the job is done they stop to grab a bite to eat where Dean runs into another face from the past.  A gal named Robin who seems to not remember him much.  Dean feels awkward and gets the hell out of dodge.

Getting  a call from Sonny, after Ruth is mysteriously killed in the bathtub behind a door that won’t open but doesn’t have a lock, the boys head back to the farm.  Dean saves Timmy from getting picked on by the boys and while doing their chores Timmy watches out of the window clearly upset with them.  When the ring leader is cleaning the grass and rosary out of the lawnmower it turns on by itself and his hand is caught inside.  Timmy smirks and a phantom hand is placed on his shoulder.  Meanwhile in the barn Sam finds drawings done by Timmy showing that his mother died in a fire after a car crash.

Back in the house Dean runs in to Robin and has another flashback.  This time it is one between him and Robin and their first kiss.  Apparently she may have been one of his first, if not his first, kiss.  He shared with her that he doesn’t want to go into the family business but instead he wants to be a rock star or work with cars. 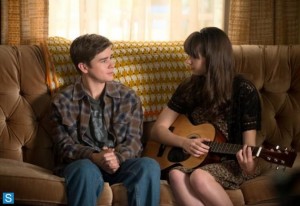 Back in reality Robin lets on that she does remember him and was hurt by him when he left.  Dean told her there was a good reason behind it but he didn’t have time to explain and he had to get her out of the house.  She doesn’t want to trust him, never again, but when Timmy shows up apologizing and telling them he can’t stop it Dean grabs her and forces her out of the living room and into the kitchen as stuff goes flying around in the hallway. 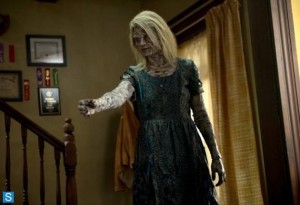 Sam comes in the backdoor just in time for it to shut behind him and not budge back open.  Timmy is so very sorry and tells them he can’t control her and Sam gets him to tell them she is the ghost and what happened.  They crashed in the woods and the car caught on fire.  She managed to get him out of the car right before it blew up with her inside.  After he wandered, scared and alone, to an abandoned building nearby and when he cried out for her she came.

Dean deducts that she gave him the action figure he carries around with him and when Timmy confirms it Dean snatches it and burns it on the stove, but that doesn’t stop her attack.  When she has Sam and Dean both pinned with her ghostly powers Dean convinces Timmy that what is keeping her there is him.   He needs to let her go and the reason she is going crazy is because she can’t move on with him holding on.  Timmy finally stands up to Mommy and she is freed to finally move on. 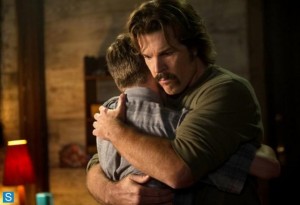 After saying their good-byes the boys walk toward their car and Sam asks Dean why he left when apparently it was the best time in his life.  Dean brushes it off and says it was only two months and it never felt right.  It was him.  However as he gets into the car we have one last flashback.  Dean is getting ready for the dance he is taking Robin too and Sonny comes in telling him his dad is there and wants Dean to come with him as he has a job.  Dean struggles and when he looks out the window he sees Sam hanging out the window playing with a toy.  At the sight of his younger brother he knew he had to leave.  When Dean gets in the car Sam gives him a heartfelt thank you for always having his back even when it isn’t always easy. 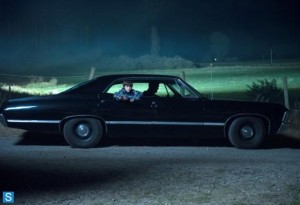 I have to admit that I really liked this week’s episode.  I really liked seeing the boy’s past and so far every young actor they have gotten to play one of the Winchester’s has done a great job.  I also love seeing the little things in the flashbacks such as sixteen year old Dean wearing the amulet Sam gave him for Christmas years before.  I know it may sound silly, but I miss that darn necklace.  I have to admit that I teared up when Dean had his last flashback.  Seeing the Dean that we started to love in the first two seasons was there again.  His love and protection for his brother shinning through.  I hope we get more of that in the rest of the season.

Until next week my fellow Supernatural fans….stay safe and happy.