Such a tragic beginning this week.  A man in a rundown cabin who calls the Suicide hotline before….well before he his murdered.  This unsuspecting, unhappy man was attempting to take his life, but instead is killed by a man placing his hand over his forehead, much like an angle, and emits a pink light before he vaporizes his victim. 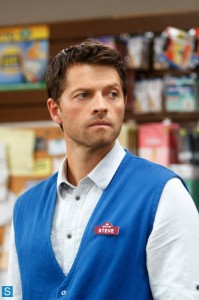 Well looky here….Cas has gotten himself a job in Idaho as a sales clerk.  He is going by the name Steve now and he seems to be liking and taking pride in what he does.  After reading about four missing people, who are presumed to be dead, he calls Dean to let him know about the case.

Kevin has made little headway, but has managed to translate the tablet into another language that is extinct but he can’t find anyone that can read it.  The Winchesters and Kevin are about to research  this ancient languages when Dean gets the call from Cas.  Dean bugs out and heads off to Idaho.

First stop the crime scene where he learns that the victims seem to have been vaporized and all that is left is a stain of pink that contains their blood, DNA, skin….everything.  All of them had been trouble in some way.  A troubled married couple, a woman hopped up on antidepressants and the suicidal man.  They were all basket cases. 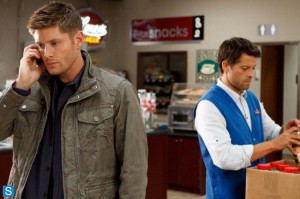 Next stop…Cas’ place of business.  Cas tells Dean that he is proud of the life he has built, in Idaho and that he even has a date with his boss.  Dean is unsettled that Cas is living a life as a sales associate and believes that his friend deserves better.  After he gets a call about another killing he talks Cas into joining him at the crime scene.

A teenage girl was turned into a pink stain after expressing her embarrassment of her boyfriend dumping her in front of the whole school.  Cas surveys the scene and he knows what is happening.  When he and Dean are out of ear shot he tells him about the Rit Zien, who are a group of angels that specialize in stopping suffering and being new to earth this Rit Zien doesn’t know the difference of true suffering and heartbreak.  Dean is gung ho about stopping this angel, but Cas is scared and for the first time Dean really realizes that his friend is truly human.  He gives Cas a pep talk about living a human life and going on his date and when he drops him off for his date he notices a truck parking in front of the house. 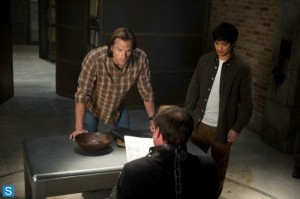 Meanwhile Sam and Kevin have learned that Crowley can read the translated language and grants him a phone call to hell in trade for him to translate Metatron’s spell.

Crowley calls Abbadon who informs him that she has pretty much taken over hell, cancelled his deals and since he has been MIA for the past few weeks she is turning his followers against him.  This angers Crowley and when his call is over he translates the spell, which we learned about last season.  Heart of a nephilim, the bow of a cupid and the grace of an angel.  He also discovers that the spell is irreversible.  The new order is angels on earth.

Back in Idaho Cas shows up for his date only to learn that he wasn’t asked out but asked to babysit in a roundabout way.  Alone with the baby Cas bonds with the fussing baby, after singing her the theme song to Greatest American Hero, and talks to her about how hard it is to be thrown out of heaven and starting over.  Panic sets in when the baby gets a fever and her mom doesn’t answer the phone.  He gets ready to take the child to the hospital but before he can set out Ephraim, the Rit Zien, shows up telling Cas he is there to stop his suffering.

At the local police station Dean is informed that the husband of the first couple that was killed wasn’t killed, but missing.  He had recently found “God” and was involved with Rev. Boyle and when Dean sees a picture of him and the truck he is standing by he puts two and two together and realizes that the Rit Zien has possessed the man and off he goes to help Cas.

Cas keeps Ephraim talking and cuts his hand on the rose he had brought so that he can paint a warding spell that will send his assailant away, but Ephraim stops him before can do finish.  However, Dean barges in but gets  knocked out of the way.  Ephraim shames Cas telling him that he is abandoning their people in their time of need and right before he places his hand Dean comes too, slides the angel blade to Cas who saves himself.

Before Dean and Cas parts Dean tells Cas that he is proud of him that he has made a life for himself despite the hardships in doing so and that he is sorry he had to make him leave the bunker.  When Cas expresses this concern about helping the angels Dean tells him that he and Sam will do that and it isn’t his problem anymore, but I have a feeling Cas just can’t walk away from this.

Cleaning up after Crowley’s phone call Sam realizes that one of the needles are missing.  He heads back to Crowley’s cell when he witnesses the Demon King injecting himself with it.  Now what on earth can Crowley be up to?

This week was a pretty good week.  I enjoy the episode highly and it was a little heartbreaking when Dean left Cas behind once again.  Sadly I don’t have any favorite quotes tonight, but so far this season has been great and I can’t wait to see more unfold.

Until next week my fellow Winchester fans…be safe and happy.