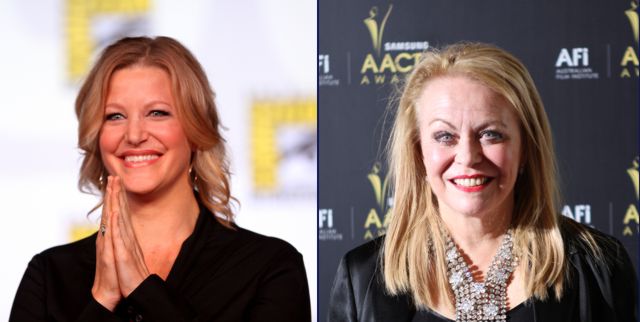 BBC America has just posted some news concerning the American remake of Broadchurch which is scheduled to air on Fox next season.  Alongside David Tennant will be Anna Gunn (Breaking Bad) and Jackie Weaver (Silver Linings Playbook).  Gunn is set to play Ellie Miller, the role originally filled by Olivia Colman in the British Broadchurch, while Weaver is playing the very suspicious Susan Wright, a role played by Pauline Miller in the UK series.

To avoid confusion with the original, the Fox version of Broadchurch will be called Gracepoint.  I assume, like its predecessor, the title is taken from the town in which the series is set.  If you’re worried that this US remake is going to keep audiences from getting more Broadchurch, you can rest easy because a second series of the show has already been ordered.  To further calm your nerves, Olivia Colman is returning as Ellie Miller.  You can, however, wring your hands along with me on whether or not David Tennant will be involved in both projects.  Something tells me he won’t be in the second run of Broadchurch, what with him being over here in the US making Gracepoint.

You can read the full, original story over at BBC America HERE.

JOIN CAST OF “GRACEPOINT” ON FOX

Gunn, who won an Emmy Award this year for her role as “Skyler White” on “Breaking Bad,” will play Detective ELLIE MILLER, a happily married wife and mother who is looking forward to a promised promotion. When the job goes to outsider Detective EMMETT CARVER (Tennant), Ellie is disgruntled – but her disappointment quickly fades in light of tragedy, and she must work her very first murder case with her prickly new partner. As the case progresses, she’ll have to look at her hometown, and those she cares about, through a different prism.

Weaver has been cast as SUSAN WRIGHT, a glowering, mysterious woman who is new to town and lives in the RV park, alone with her dog. She works various cleaning and odd jobs and prefers to remain anonymous, but has a dark history kept fiercely hidden.

Set in an American town, GRACEPOINT is the American version of the U.K.’s most-watched new drama of the year, “Broadchurch.” The gripping crime series follows the tragic and mysterious death of a young boy found dead on an idyllic beach surrounded by rocks and a jutting cliff-face, from where he may have fallen. Although the cause of his death remains unsolved, the picturesque seaside town where the tragedy occurred is at the heart of a major police investigation and a nationwide media frenzy.