Doctor Who: “The Time of the Doctor” – DVD/Blu-ray Release Date 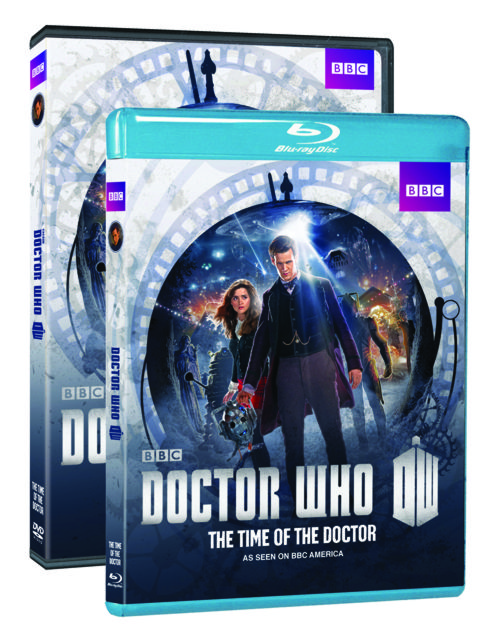 From the press release:

DOCTOR WHO: THE TIME OF THE DOCTOR

The Final Appearance of Matt Smith as The Doctor

New York – December 18, 2013 – BBC Home Entertainment announces Matt Smith’s final appearance in Doctor Who: The Time of the Doctor coming to Blu-ray and DVD on March 4, 2014. With over 60 minutes of sensational bonus features including an hour long special celebrating Matt Smith’s tenure as the Eleventh Doctor, this is a must-have for any Doctor Who fan’s collection.

Orbiting a quiet backwater planet, the massed forces of the universe’s deadliest species gather, drawn to a mysterious message that echoes out to the stars.  And among them – the Doctor.  Rescuing Clara from a family Christmas dinner, the Time Lord and his best friend must learn what this enigmatic signal means for his own fate and that of the universe. Orla Brady (Fringe, Mistresses) guest stars as Tasha Lem.

Lead writer and executive producer Steve Moffat commented: “It’s his final battle and he’s been fighting it for a while. The Doctor is facing the joint challenge of a mysterious event in space that has summoned lots of aliens to one place and helping Clara cook Christmas dinner. There are also elements from every series of Matt’s Doctor, which will come to a head in this special. Things that we’ve laid down for years are going to be paid off. “

Doctor Who: Farewell to Matt Smith airs Christmas day, December 25, at 8/7C immediately followed by The Time of the Doctor at 9/8C on BBC America