Do you like graphic novels, comics, and science fiction?  How would you like a chance to voice a character in an independent project?  You could do just that by auditioning for a part in Project YXM, a narrated graphic novel that’s an original production from the folks at Save Sci-Fi and the mind of Bryan Baier. 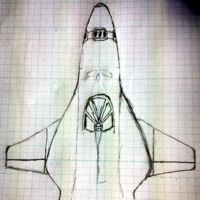 The icon image is a rough first-draft by Bryan for the main ship in the story.  The person doing the final artwork hasn’t released anything yet because they want it to be exactly right and there will almost certainly be some changes from initial sketches.  Understandably, the artist wants the graphics to be perfected before releasing anything publicly.

Save Sci-Fi is a site and Facebook page that are a lot like Three If By Space; it’s fan run and fan-focused.  They started the audition process back in August and September, but are still looking for just the right voices for two of the main characters.  The character outlines are listed after the story description.

Project YXM is a story of both mystery and redemption. It takes place between the years 2154 and 2156 in a universe where a celestial UN (the Outer Systems Alliance) made up of several alien races rules the same part of the galaxy that the Earth is in. When the crew of Project YXM is implicated in a bombing they did not commit, and accused of stealing a craft jointly built by the Earth and the Vraolids of Gendrey (the OSA’s founding race), they must band together to collect information and evidence of their innocence, attempt to capture the real villains (a separate group of Vraolids called the Forces of the Light of Sauldo, a theocratic dictatorship whose existence is denied by the OSA) and restore their previous lives as best they can.

As they struggle in their quest to evade authorities and capture an enemy, both of whom are more well equipped than they are, they’ll attempt to come to terms with what cannot be fixed, that being human means feeling sympathy even for an enemy, what happens when one deliberately takes away our ability to feel sympathy and commit an act unforgivable, and how deep the double blade of revenge can drive a sword into ones heart.

Project YXM will be an audio graphic novel. The story will be told via still images reminiscent of both comic book panels and movie story boards coupled to voice over, music and sound effects.

Currently, Project YXM is looking for people who can voice two of the main characters.  If you’ve got any experience in voice acting or ever wanted to give it a shot, check out the descriptions below and email projectyxm@gmail.com to get started.

Joshua Trigert: Age 12. He has intense blue eyes, short, spiky blond hair that follows the shape of his head and the face and smile of a boy who knows that he is the coolest kid ever. Josh acquired a pilots’ license at the age of 10 making him the youngest licensed pilot in the world and the Central Systems. His youth makes his reaction time lightning fast; his piloting is excellent as a result. He has always liked moving and running or riding something with wheels as fast as possible. Josh is very confident in his abilities and is willing to dive into almost any situation.

Andi Wright: Age 15, is pale, thin, delicate, and knows that she is beautiful. She has blond hair that she keeps short. Andi thinks of herself as a model and a social diva whom the world should be grateful to take care of. She is very good at languages and already has a basic command of 3.

Click HERE for the casting call and character descriptions in Word format.