Excitement, twists, nail-biting scenes…that is what you expect from a Mid-season finale and Supernatural sure didn’t disappoint.  I am still reeling from the episode, and I wonder how I am going to get through the next few weeks before we are graced with the show again.

A holy bus full of angelic women walk into a biker bar….no this isn’t a start of a bad joke, but the beginning of Supernatural.  These women dressed in white dresses and pink sweaters walking into the bar where we learn they are angels out to fight their brethren in the bodies of the bikers.  When the fighting is over the women walk out and the bar is filled with dead bodies.

Apparently an angle named Malachi, and his band of religious singers,  is trying to over throw Bartholomew or at the bare minimum join  with him to overthrow Metatron and take back heaven.  When he meets up with Bart’s representatives he is brushed off and not taken seriously.  Then he sends a message by killing the ones that Bartholomew sent to “talk” to him.

Sam and Dean are headed out to the massacre but Dean isn’t talking to Sam, but Zeke.  Zeke is telling Dean that Sam is doing much better and it won’t be long, but Dean is skeptical as Zeke has been saying that the whole time.  Zeke isn’t shy about his dislike for going to the scene where angles were killed.  Dean tells him that Sam would know something was wrong if they didn’t.  Zeke drops it but not before he asks Dean to be discreet.  When Sam returns he finally expresses his confusion of his missing time.  Dean, of course, just blames the trials. 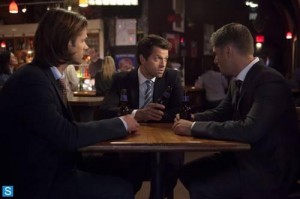 When they arrive at the scene they are greeted by their fellow “agent” Cas.  Sam is really happy to see Sam, but Dean is nervous as he knows that Zeke wants nothing to do with Cas or any angel.  Cas tells them he has to be part of this when angels are killing angels.  After a reunion beer Sam and Cas are left alone and Dean tells Cas that as much as he is glad to see him Sam is still very messed up and they just can’t work together. 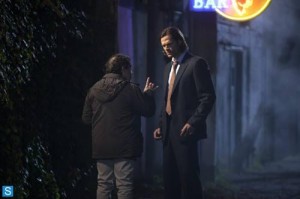 A Zeke, Sam goes for a walk because he doesn’t want Cas to find him out when he runs into none other than Metatron himself.  Metatron confronts him and tells Zeke that he knows he isn’t Ezekiel but Gadreel and angel who was imprisoned for allowing the evil into the garden of Eden.  He took Ezekiel’s name because he is known for being a good angel.  Metatron fills Zeke in on the fallen angels plight, which apparently he had no knowledge of,  and proposed a deal to him.  Metatron is tired of his solitude in heaven so he wants to recruit angels to come back home and make Heaven into what God had originally dreamed it to be with one big change…Metatron would be leader of this new Heaven.

Meanwhile Cas has resorted to praying.  He finds himself lost and needs help figuring out why angles are slaying angels.  After a while a kind angel, named Muriel, shows up, but when she realizes that Cas is Cas she isn’t happy, but something keeps her from leaving and turning him in.  Cas explains to her that he was tricked by Metatron and he didn’t know what he had planned.  Muriel isn’t sure she should believe Cas, but she stays and she even fills him in on Malachi and Bart’s feud and how angles who are trying to stay out of the war are being tortured until they pledge an alliance.   Speak of the devil…no wait the angel…Malachi and his lackey Theo show up (they were tracking Muriel) and take both Cas and Muriel. 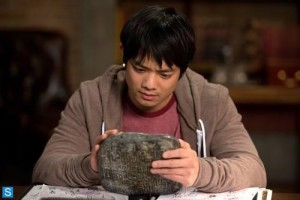 Back at the bunker Kevin is still trying to translate Metatron’s spell.  He tells Dean that he doesn’t know why it matters because Crowley says that is irreversible, but Dean doesn’t trust Crowley and tells Kevin to keep working.  Zeke has left the bunker to meet up with Metatron and accepts his offer, but before Metatron will take him into Heaven as his 2nd in command and allow him to redeem his name he must show his alliance by ridding them of those that stand in their way.  Metatron hands him a card and when Zeke….sorry Gadreel , reads the card he doesn’t seem happy with his task, but seems to accept what he must do. 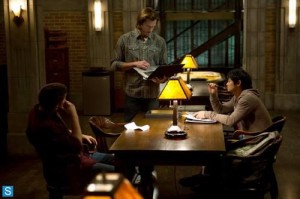 Cas and Muriel is tortured by Malachi and Theo.  Malachi doesn’t believe that Cas doesn’t know how to reverse the spell , but Cas has nothing to share with them and has to even endure watching Muriel’s death.  When Malachi finally resolves that Cas is of no use to him he leaves him to Theo.  However, Theo has other plans.  He believes that Cas has connections with Metatron and wants Cas to talk to him and ask him to take Theo into Heaven as a soldier.  He knows taht Malachi is crazy and that no one is going to win or live the angel war.  Cas plays into Theo’s belief and gets him to unchain him.  Once that is done Cas grabs the angel blade and steals Theo’s grace.  He isn’t happy about his actions, but he is gearing up for war and couldn’t do it as a human.

After he gets away he calls Dean and tells him all that he has learned including the fact that Ezekiel is dead.  Of course this alarms Dean as he believes that Zeke is healing Sam.  He sets Kevin on a mission to find a spell which will allow them to talk to the human host of a possessed victim, but the plan fails because Gadreel overheard that plan.  He tricks Dean into believing he is Sam and ends up taking Kevin’s life.  It was Kevin’s name on the card that Metatron handed him.   Dean is devastated when Gadreel tells him that there is no more Sam and leaves the bunker.

This episode was just jaw dropping and now we have to wait till January 14th to see what happens next.  It was such a great episode and I am just at a loss for the words to build it up.  It is a must see and it will leave you at the edge of your seat.

So until January 14th my dear wonderful Supernatural fans be safe, happy and have a wonderful holiday season.