Watch the Trailer for BBC America’s “Doctor Who: Farewell to Matt Smith” 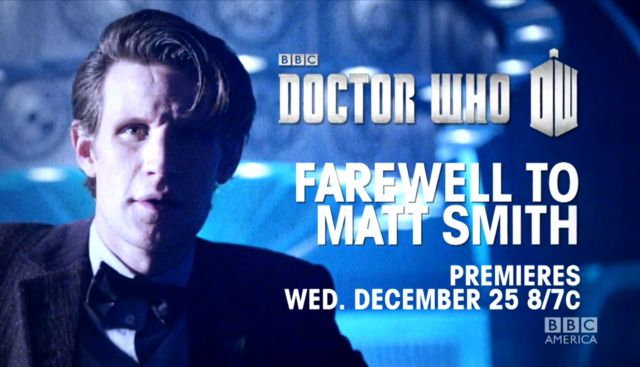 As the end of Matt Smith’s tenure in the TARDIS draws near, we’re all preparing for the inevitable end.  That bittersweet Christmas gift wrapped as The Time of the Doctor is definitely going to bring both joy and pain to our hearts.  BBC America is going to help ease our pain (or possibly exacerbate it) by broadcasting a special farewell tribute to Matt Smith.

The special, Doctor Who: Farewell to Matt Smith will air Wednesday, December 25 at 8/7C immediately before The Time of the Doctor.  The one-hour broadcast will feature highlights from Smith’s time on the show along with interviews with cast and special guests.  Watch the trailer below.

Immediately followed by the 2013 DOCTOR WHO Christmas Special, “The Time of The Doctor”
Watch trailer now: http://bit.ly/19CXphS

Featuring highlights from Smith’s run with interview footage from the man himself, his castmates, writers, producers, guest stars and celebrity Whovians.

Doctor Who: Farewell to Matt Smith airs Christmas day, December 25, at 8/7C immediately followed by The Time of the Doctor at 9/8C on BBC America