Devil’s in the Footnotes: John Connolly

Devils and angels, imps, saviors, beer… all feature prominently in Irish author John Connolly’s books, in both his Charlie Parker detective mysteries and his Samuel Johnson series. Fortunately, that’s where the similarities between the two series end – both series are great reads, and well worth devoting the few hours you say you have (but I see you there playing XBox, you’re not really that busy). 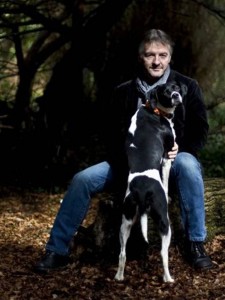 And while I love the Charlie Parker series (quick synopsis: Parker’s a PI in Maine, may or may not be a fallen angel – yes, one of Lucifer’s fallen angels – wife and child were viciously ripped apart by a serial murderer, has gay contract killer friends named Louis and Angel), which includes the newest installment, The Wrath of Angels, I’m CRAZY about the Samuel Johnson books – The Gates, The Infernals, and the latest, The Creeps. Anything that can make me laugh so hard I spit out my lunch in a crowded restaurant is high up on my list. 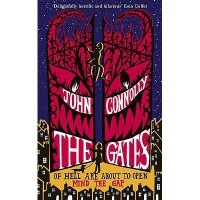 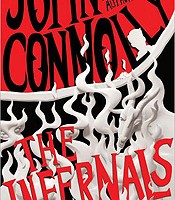 The Gates starts the story of young Samuel Johnson, a semi-average boy who holds back an invasion of his home town, Biddlecombe, England, by the Devil’s minions. The evil crew are coming in through a basement in a neighborhood home that disguises the gates of Hell, which have been opened by running the CERN supercollider. Not all of the devils are frightful – Samuel and his small dog Boswell befriend two of them, Nurd and his servant Wormwood. Fast cars, atomic beer, moving statues, a boy band you’d pay to shut up, thieving dwarves and an ice cream truck – what’s not to have a spit-take about?

I strongly suggest that you not read the many footnotes in the books while you have anything particularly nasty in your mouth, or your table companions will be strongly suggesting you pay for their dry-cleaning. For example, the footnote following this sentence in The Creeps: “Once you got over the fact that he was largely transparent, and clearly demonic…” is:

55. A small joke playing on the words transparent and clear, which mean the same thing, pretty much. It troubles me that I have to explain some of the jokes – not to you, obviously: I know that you’re hugely intelligent, and you got that joke straight off, but not everyone is as bright as you. Maybe there should be a test before we allow people to read this book. We could pay people to wait in bookstores and libraries, and when someone picks the book up with the intention of reading it, the tester could then step in with a list of simple questions. You know:

2. If you see a sign on the street that reads CAUTION: DO NOT CROSS HERE, do you (a) Cross; (b) Look for somewhere else to cross.

3. If you are at the zoo, and see a notice on the lions’ cage that says DANGEROUS ANIMALS: DO NOT PUT HANDS THROUGH BARS, do you (a) Put your hand through the bars, and waggle your fingers invitingly; (b) keep a safe distance and, therefore, keep your hand, too.

If you have answered (a) to any of these questions, then you’re not bright enough to read this book, and we also have another question for you: namely, how come you’re still alive?

Connolly is a prolific writer. On his website, he talks about writing: “To begin with, and like a lot of writers, I have always written. I began writing when I was very young, and kept at it into my teens and my adulthood. I started off writing very (VERY) short stories while in school, flirted with bad poetry, then moved into journalism – local first, then national. I very much believe that writing is a craft: at its best, it should be infused with passion and wit and inspiration, but its basic building blocks are words, and it is practice, trial and error, that teaches you how to use them properly. Through writing at home, then writing for newspapers, I began to learn. I’m still learning.”

And I have to say, Mr. Connolly, as long as you’re still writing, I’ll still be reading.