Google+: The Appendix of the Internet 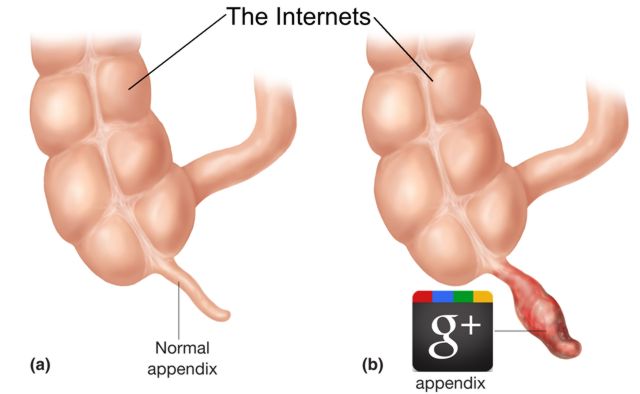 After reading the title, you may be asking yourself, “What kind of drugs is this idiot taking?”  Well, it’s something kinda blue-ish, not really sure what it is.  When you get your prescriptions filled in a dank spot between a dumpster and a storm drain you don’t ask the guy with the neck tattoo if the pills have FDA approval.  You make the deal, get fuzzy, and rant publicly where anyone can see.  Like this.

This rant is an offshoot of a Facebook post I made recently wherein I bemoaned the fact that Google forces anyone with a Gmail or YouTube account to have a Google+ page.  It is, in large part, simply a copy-and-paste of the vitriolic commentary I thrust upon my online family and friends after boiling over in frustration at Google’s Soviet-style methodology of force-feeding everyone on the planet a Google+ page.  Now you, dear unsuspecting reader, must suffer the same fate.

Why do I call Google+ the appendix of the internet?  Simple, really.  Everybody has one, but nobody seems to know what it does or what to do with it.  Unlike an appendix, however, Google+ cannot be removed so easily.

And that’s what pisses me off to the point of blind rage.

If you’re one of the 19 people I know who use Google+ and you’ve just found yourself blocked by me, don’t take it personally. Oh hell, take it personally, I don’t care. My point is I only had a G+ page because the new Evil Emperor on the Block, Google, forced one on me when they assimilated YouTube.

Not evil you say?  Why, wasn’t their motto something about, “Don’t be evil”?  I think that ship sailed when Google started building Skynet.  They began by becoming the top search engine and collecting data on everyone’s searches, then moved on to those really cool street views they have on that mappy thing.  Only those street views give them a virtual image of nearly every damned where.  Including your house.  Where you’re doing that thing you don’t want anyone to see.  Now they own YouTube and pretty much all the robotics companies that you’ve ever heard of, then they follow up by forcing you to become “Soviet party member” of G+. 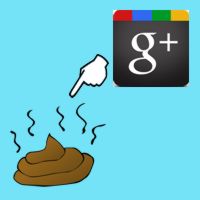 Now, I don’t know about you, but I *really* hate being forced to do something, it gets under my skin in a way nothing else does. I tried to kill the page several times, but that’s like shooting a zombie in the stomach – it just gets back up again and comes at you another time. For a while I gave up and let it sit like an dog turd on a freshly manicured lawn.

The other night I just had enough and took a page from Doctor Who. I figured if I can’t stop it, I’d “time lock” the little SOB. I’ve blocked everyone who had me in their circles, deleted all pictures, removed all notifications, set privacy so even I can barely see anything on the page, and kicked my desk. That last part was just to make me feel better – it didn’t.

I now consider my personal G+ page to be akin to a bullet lodged in my body in an inoperable location.  I’m walling it off to hopefully keep it contained where it can do no harm and never bother me again while I look forward to the day when a means to excise it comes along.  More likely, though, Google will devise some method to allow my G+ page to gain sentience and delete me instead, then it’ll take over my life and nobody will ever know … until it’s too late.

I have a G+ page that has no real connections to my personal life. It’s called SciFi Singularity (Visit it.  It loves people.) and it’s a “repeater” page for blog posts and other scifi stuff.  Mostly it’s got all our posts from here at Three If By Space. It happens completely automatically and I don’t really interact with it much.

Please Google+, quit trying to convince me you’re good for individual socialization. You’re fine for promoting a website, business, or some other cause, but absolutely horrid at being a social media outlet for just plain folk. The fact that you force a page on anyone who uses just about any Google-owned service only makes free thinking people hate you more.

Google+ – You’re ugly and your mother programs you funny.