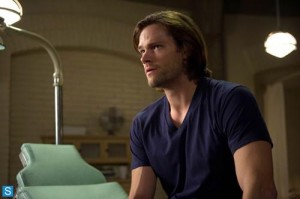 Tonight was a very interesting episode.  We got a new twist on one of our oldest bible study stories and we re-examine the Winchester relationship through our beloved angel Castiel.

Dean is so consumed by his self loathing that he actually allowed himself to get tangled in to Crowley’s betrayal.  Even I knew that Crowley was setting Dean up when he showed up bellyaching about needing Dean’s help to find the first blade so they can kill Abbadon, but Dean is so focus on revenge and his self-hatred that he went along with it. 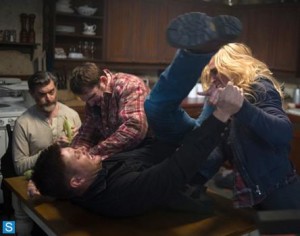 However it did make for a great story line.  As we follow Dean and Crowley to an old storage locker of John’s, a visit with an old friend of John’s and finally to the first son, Cain, where we are told the Supernatural’s version of Cain and Able.

According to Crowley Cain is a demon.  After killing his brother he became a demon and one who should be feared.  I think Crowley called him the demon of murder or son of murder, but anyhow he is one scary bad guy, but Dean, our brave hero, doesn’t show any signs of fearing Cain and demands him to turn the first blade over to him so that he can kill Abbadon.

During the course of their visit Cain compares Dean to himself, but Dean disagrees because he didn’t’ kill his brother, but save him.  When Cain asks why he tells him it is because you never give up on family….dun dun dun then the twist is that much more shocking.  Cain didn’t kill his brother Able because he was God’s favorite, but because he was talking to Lucifer and he couldn’t stand by and watching him sell his soul so he made a deal with Lucifer his soul in hell and Able’s in heaven.  Lucifer agreed, but his stipulation is that Cain had to send Able to heaven, and that is why Cain killed Able.  He then became a demon and a Knight of Hell.  After watching Dean fight the demon’s, that invaded his home, and his love for his brother Cain offered to give Dean the Mark of Cain so that he could wield the blade, which turns out to be the animal bone he killed Able with, and go up against Abbadon.  Dean accepts and agrees to use the blade on Cain when he calls him to do  so.  Cain sends Crowley and Dean off to find the blade that he threw to the bottom of the deepest ocean and he falls back in to his killing ways as he takes care of the hordes of demons rushing into the house. 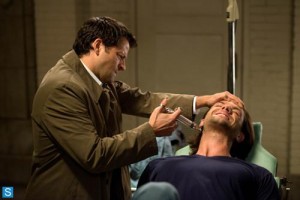 Back at the bunker Cass and Sam are trying to find Gadreel.  In another round of healing Cass detects some of Gadreel’s left over grace and shows Sam a spell the men of letters had saying they could track an angle with some of their grace.  Sam agrees, because much like Dean he is feeling  a cloud of guilt and wants to right his wrongs, despite that it could be dangerous.

Cass tries to get Sam to see reason about what Dean did and about him trying to give up his life, but Sam is hell-bent on finding the rogue angel so Cass starts to extract the grace.  However, an interesting things happens, one that I loved, Cass has changed because of his time at being human and he wont allow Sam to give up his life.  He takes what he can and then tells Sam that his life is worth more than he thinks.  What Cass says gets through to Sam and even though they didn’t have enough grace to track Gadreel, Sam is grateful to Cass.

So tonight was awesome and I loving this season so far.  I am looking forward to next week when we get to see Garth again and he looks like he has been harboring a secret from us.  I can’t wait.

Until next week my wayward family..stay safe and happy.