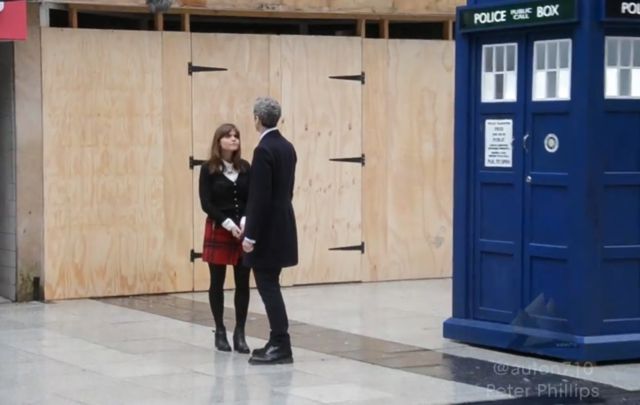 UPDATE:  Transcript of dialogue with missing bits and wild speculation follow the video.

Filming is underway on Doctor Who series 8 and we’ve got some man-on-the-street footage from fellow Whovian and YouTube user Auton710 (aka Peter Phillips).  Peter (Phillips, not Capaldi) has generously agreed to share with us this video of what looks to be a very early episode in the next run.

–>WARNING:  THIS VIDEO AND THE INFORMATION BELOW CONTAIN SPOILERS.<–

I repeat.  There are spoilery spoilers that are spoiled beyond all reasonable spoilishness.  Let me be clear – unless you want to come away spoiled like last week’s fish dinner left out in the sun you should avert your eyes immediately.  That’s right, stop reading.  No, don’t look.  Not even a peek.

Stop it!  River Song would not approve.

Okay, for the rest of you brave souls who’d sell that brave soul for even the tiniest bit of Doctor Who news, let’s unabashedly sully ourselves with Who’s News.  Yum …

The video isn’t the most exciting thing to watch, but it’s what’s revealed during the scene that’s key.  This is a simple exchange between Clara and the newly-regenerated Doctor.  You MUST have captions on to understand what’s being said.  I had to restart the video on YouTube to get the captions to show up.  YMMV.

To recap, or in the event captions didn’t work for you, Clara’s phone call wasn’t just to a who (yeah, I said that), but apparently to a “when” as well.  Presumably, she’s speaking to “her” Doctor – Eleven.  He’s trying to help her wrap her mind around what just happened.

Regenerations take their toll on a Time Lord, but they’re at least as traumatizing to a human companion.  People don’t just spontaneously change into other people every day so Eleven is telling Clara that the elder gentleman in the TARDIS is, in fact, still him, albeit a somewhat different iteration.

If this is correct, then we may be looking at one of the first scenes of episode 1, series 8!  Score one for crazy fans and the internet!!

Permission to use this video was graciously granted by the owner, @Auton710 aka Peter Phillips.  Please thank him on Twitter by following @Auton710 and visit Auton710’s YouTube Channel.  If he gets more footage of filming as the show continues, we’ll bring it to you right here.

Thanks to a helpful comment from keen-eyed reader BMK8372, I’ve taken his comments and combined them with the captioned dialogue to form a  more complete conversation. The accuracy of what follows can’t be verified (yet), but it makes sense.

Clara: Hello? Who is this?

Eleven: I’m phoning you from Trenzalore.

Eleven: From the past. From before I changed. It’s all still to happen for me. It’s coming, though. Not long now, I can feel it.

Clara: But, why would you do this? I’m scared. He’s coming now.

Eleven: I know you’re scared, but he will be, too, and you need to look after him.

Twelve: I’m not on the phone, I’m right here. I’m standing in front of you.

Clara: It is you.

Clara: Where are we?

Twelve: I don’t have any money.

According to BMK8372, the Eleventh Doctor made the call in “The Time of the Doctor.” He’d been arguing with his Cyberman head companion, Handles, who’d been on him to reconnect the TARDIS’ door phone to the console, which he finally does. Supposedly, he makes the call just before he goes inside and experiences the most abrupt regeneration in the show’s history.

Many fans, myself included, weren’t very happy with the sudden regeneration. There was no real closure in the way Smith’s predecessors had, so this conversation is a novel, yet affecting, way to handle the change. In many ways it’s a better way to tackle the regeneration because Clara gets  to speak with both versions at the same time.

Now we wait many months to see just how accurate all this speculation proves to be.