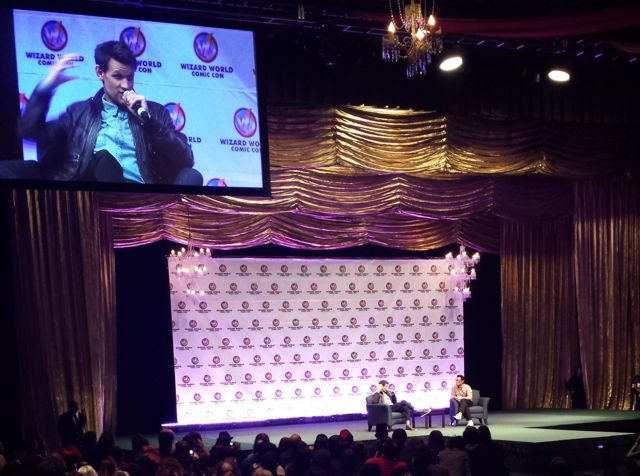 If you caught part 1 of the Matt Smith panel from Wizard World New Orleans 2014, then you know there were some great questions asked and some very entertaining answers given.

If you missed it, make haste and check out part 1 here:

When you’re done with parts 1 and 2, finish off the panel with part 3 here:

Now that you’ve been thoroughly entertained by Matt and his very Doctor-ish answers, let’s get on with another round of Q&A.

Moderator Tony B Kim of of Crazy4ComicCon asked an interesting and pretty important question.  He wanted to know what Doctor Who‘s contribution to 50 years of pop culture might be as seen through the eyes of Matt Smith.

I’m not alone in thinking the Doctor Who 50th Anniversary episode The Day of the Doctor was one of the best episodes the show has ever presented.  It also looked like everyone was having a blast making the episode so a fan wants to know what Smith’s favorite part of the experience might have been.  I think you’re going to love his answer.

Sometimes a simple question out of left field produces the most entertaining results.  A young fan wants to know, “What’s your favorite animal?”  Proving he’s every bit as entertaining in person as he is playing the Doctor, Smith gives a most amusing answer.

Here’s something most of us probably don’t think about.  Playing the Doctor pretty much means you’re the main thing holding a 50-year-old show together.  Matt answers how he deals with the stress involved with being in that position.

And we’ll end part 2 with a question that everyone’s considered.  “If the TARDIS were real, where would you go?”

Be sure to check out parts 1 and 3 of Ask the Doctor linked above!