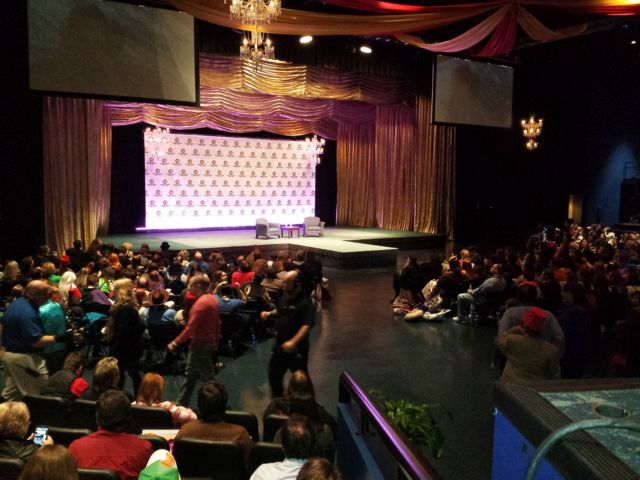 There were a lot of great guests at the New Orleans outing Wizard World Comic Con 2014, but the one who turned the most heads was definitely the Doctor himself, Matt Smith.  So many people wanted to see the lanky Gallifreyan that the panel had to be held in the convention center’s New Orleans Theater which seats over 4000 people, and it was packed.

The panel didn’t kick off until 6:15 pm, but fans started lining up as early as 11 am!  Having been in the panel I can say with absolute certainty it was well worth the wait.  I have so many fun questions and answers I’ve decided to break this post up into multiples, each having clips of a question/answer or some story Matt regaled the audience with.  The clips are in chronological order because that seemed like the best way to go.  If you have a better idea, I’m open to suggestions.

Hosted by Tony B Kim of of Crazy4ComicCon, the 45 minutes with Matt Smith seemed to fly by.  There were a very interesting array of questions and Matt was very entertaining to both see and hear.

It should be noted that included is video of the now infamous question regarding how Smith feels about some other man having a relationship with River Song.

Not content to just see snippets of the panel or didn’t get to make it but wish you had?  Well, don’t fret because I’ve embedded the full panel in its entirety at the end of this post!

When you’re done, be sure to check out parts 2 and 3 of the panel at these links:

Now, let’s get on with the fun, shall we?

The first question was asked by a young lady whose nervousness at speaking with Matt Smith literally melted every fan’s heart.  She wanted to know what was the scariest episode he filmed.

Another young fan wants to know how the Silence managed to destroy the TARDIS.  Smith has a great answer that can be used in numerous situations on the show.

Matt is asked to try and sum up his experiences on Doctor Who in a single word.  He comes up with one.  It’s a made up word, but it’s hilariously appropriate.

Okay, this question has gotten the most attention in the press.  It’s the one where a fan asks how he feels about Peter Capaldi’s Doctor having a relationship with his “wife” River Song.

“Is there anything in the world you would give Doctor Who up to have?”  His answer is pretty simple and typical … for a man.

And for those of you who can’t wait for parts 2 & 3 or just want to soak in the entire panel all at once, I present to you the Wizard World New Orleans 2014 Matt Smith panel in full:

Don’t forget to check out parts 2 and 3 of Ask the Doctor linked above!