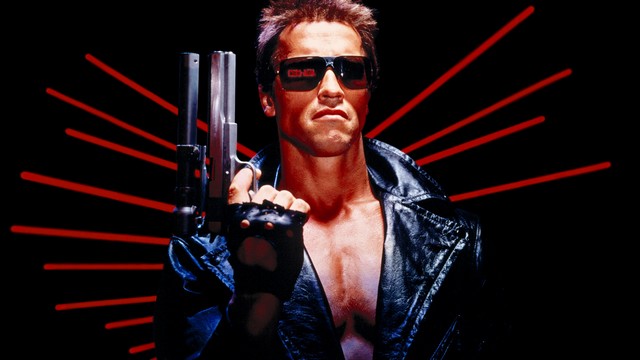 Well, this is something new for Matt Smith.  Being part of a time travel story that doesn’t involve a blue box has got to feel a little strange to the actor who recently departed Doctor Who.

There aren’t many details about the film, which is currently going by the title Terminator: Genesis, but it somehow involves an aging Terminator played by Arnold himself.  Smith is playing “… a new character with a strong connection to John Connor.”  As a Whovian I’d like to think he’ll be playing the Doctor and helping John Connor deal with those pesky Terminators – that universe’s meaner, badder, and meatier version of the Cybermen.  It ain’t gonna happen, but it ain’t stopping me from wishing, either.

The really important question that has fans worried is this:  Is Smith going to have trouble dropping the “ex” from “exterminate”?  We gotta focus on what’s important, people.

Here’s the press release from Paramount:

HOLLYWOOD, CA (May 1, 2014) – Paramount Pictures and Skydance Productions announced today that “Doctor Who” star Matt Smith will join the cast of the upcoming “TERMINATOR” reboot.

Smith is best known for playing The Doctor on the popular “Doctor Who” television series during the 2011-2103 seasons. His other television credits include “Christopher and His Kind,” “Moses Jones,” and “The Street.”  He can be seen next on the big screen in “LOST RIVER,” directed by Ryan Gosling, alongside Christina Hendricks, Saoirse Ronan and Eva Mendes.

He is represented by United Talent Agency and Michael Duff at Troika.

The “TERMINATOR” franchise launched in 1984 with Schwarzenegger as the title character and spanned three subsequent films, which have earned more than $1 billion at the worldwide box office.

Paramount will distribute the film worldwide on July 1, 2015.

In case you somehow missed that last line of the press release, Terminator: Genesis will be released July 1, 2015.