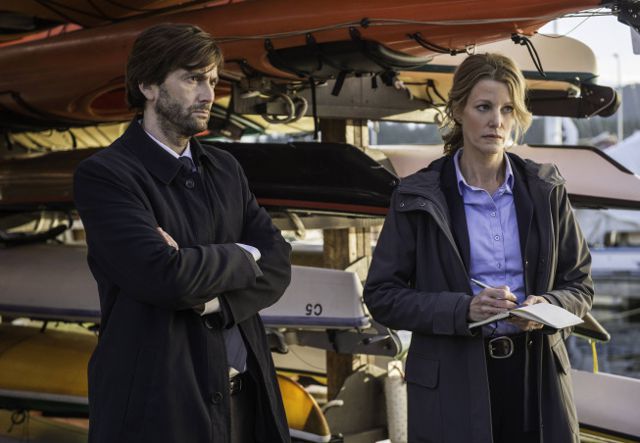 I hope I’m wrong, but judging by this trailer if you saw Broadchurch then you’re going to find FOX’s 10-episode “event series” Gracepoint very familiar.  The promo makes it look as if this US version of the murder mystery series is a shot-for-shot remake of the original British one.  That’s not necessarily a bad thing since Broadchurch was riveting television, but I hope for the sake of us fans the details of the murder, and the solution to the mystery, have been changed up enough that we don’t see the end coming before the series has even begun.

And if you’re not dizzy enough already from Tennant playing double-duty on the detective front, the former Time Lord has already signed up for a second series of Broadchurch.

Ten-episode mystery event series GRACEPOINT follows the tragic death of a young boy, and the major police investigation and nationwide media frenzy that subsequently overtake a picturesque seaside town, where anyone is a suspect.

See what I mean?  The trailer gives the feeling we’ve seen all this before, but it’s intriguing enough to pique my interest.  The more detailed synopsis below indicates that the details of the story will indeed be changed up enough to make it an entirely new mystery.

When a young boy is found dead on an idyllic beach, a major police investigation gets underway in the small California seaside town where the tragedy occurred. Soon deemed a homicide, the case sparks a media frenzy, which throws the boy’s family into further turmoil and upends the lives of all of the town’s residents.

Welcome to GRACEPOINT, a new 10-episode mystery event series based on “Broadchurch,” the U.K.’s critically acclaimed hit crime drama. GRACEPOINT is an expansion of the original series, introducing new characters, identifying new suspects and threading new storylines through the gripping narrative. Leading the investigation is Detective EMMETT CARVER (David Tennant, “Broadchurch,” “Dr. Who”), who has just arrived in Gracepoint to fill a high position in the town’s police force. That job previously had been promised to Detective ELLIE MILLER (Emmy Award winner Anna Gunn, “Breaking Bad”), who, in light of the tragedy, must put any resentment aside and work the case with her prickly new boss.

All of Gracepoint is pulled into the investigation, including JACK REINHOLD (Emmy Award nominee and Golden Globe Award winner Nick Nolte, “Luck”), a private man who runs the kayak rental service on the beach, as well as the local wildlife observation program, for which Danny volunteered. SUSAN WRIGHT (Academy Award and Golden Globe Award nominee Jacki Weaver, “Silver Linings Playbook”), a mysterious woman, lives in the RV park near the coast, with her dog. The town’s minister, PAUL COATES (Kevin Rankin, “Justified”), becomes the de facto spokesperson for the community as the media descends on Gracepoint. Danny’s death also impacts tourism, with the decline in visitors felt most harshly by hotel owner GEMMA FISHER (Sarah-Jane Potts, “Kinky Boots,”), a vivacious Brit with secrets of her own.

Also touched by Danny’s death is Mark’s apprentice at his plumbing company, VINCE NOVIK (Stephen Louis Grush, “Lucky 7”). The investigation is followed closely by the town’s local newspaper reporter, OWEN BURKE (Kevin Zegers, “Transamerica”), who is Det. Miller’s nephew. Owen’s ambition is fueled by San Francisco Globe reporter RENEE CLEMONS (Jessica Lucas, “Cloverfield”), who has a history with Detective Carver and sets up camp in Gracepoint to cover the case. The riveting crime series carves a powerfully dark wake through the town of Gracepoint with a startling conclusion, as the detectives piece together what happened on the night of Danny’s death.

As of now, no exact premiere date has been announced for Gracepoint, but it premieres on FOX sometime in the Fall.