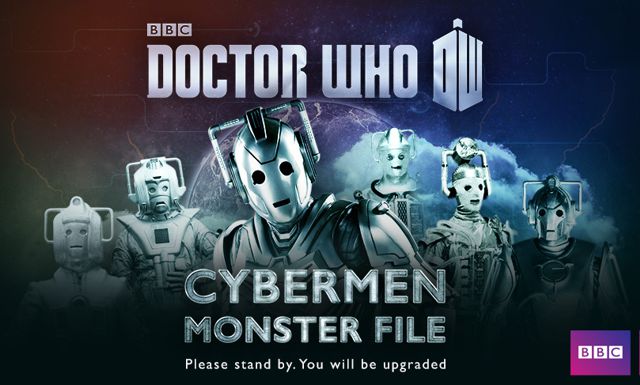 Get Upgraded – the “Doctor Who: Cybermen Monster File” eBook Is Here

If you’ve been keeping up with Doctor Who season 8 news, then you may already know that the Cybermen will be making an appearance opposite Peter Capaldi.  They’ve been featured a number of times in the modern run of the show and are one of the most popular monsters in the Doctor Who universe.  But how much do you really know about them?  Probably not a whole lot. Enter one interactive ebook from BBC Worldwide to remedy that information situation.  Available for multiple portable devices through Google Play, Amazon (Kindle Fire), and iTunes, the interactive ebook is much more than a font of knowledge about all things Cyber.  It’s got clips, photos, quizzes to see how well you know your Cybermen, and an brand-new story called Cybermen: Status Update written by Joseph Lidster and narrated by Nicholas Briggs (the voice of the Cybermen since the 2005 relaunch).

UPDATE: Catch the trailer for the Cybermen Monster File HERE.

Oh, and in case you didn’t notice, the image at the top of this post is a clickable photo gallery showcasing several images from the interactive ebook.  Click on it to see the rest of the gallery.

New York – July 2, 2014 – Created by the BBC and distributed internationally by BBC Worldwide, Doctor Who: Cybermen Monster File is the ultimate interactive history of one of the Doctor’s most famous foes. Every version of the Cybermen is brought to life using clips, photos and in-depth information.  The interactive ebook also includes a brand new exclusive story written by Joseph Lidster entitled Cybermen: Status Update, which is narrated by Nicholas Briggs, who has been the voice of the Cybermen since Doctor Who’s relaunch in 2005. The Cybermen Monster File also features galleries and the real-life story behind the metal monsters. There are interactive sections on the world of the Cybermen, where everything from Handles to Cybermats and the CyberKing is investigated as well as quizzes about the Time Lord’s old enemies. The ebook will be released on June 24 globally, and will retail at $9.99 across all platforms (including iTunes, Android stores, the Kindle Fire App and Google Play) in the U.S. BBC AMERICA’s highest rated series,Doctor Who, returns with a new season and a new Doctor in August. The ebook will be available for free to licence fee payers in the UK only for 30 days, after which it will be available on iTunes, Android stores, the Kindle Fire App and Google Play priced £6.99.

You can read more about it at BBC’s Doctor Who: Cybermen Monster File web page.  Once there you’ll find information about the ebook, all possible links to download it, and an informative FAQ section.