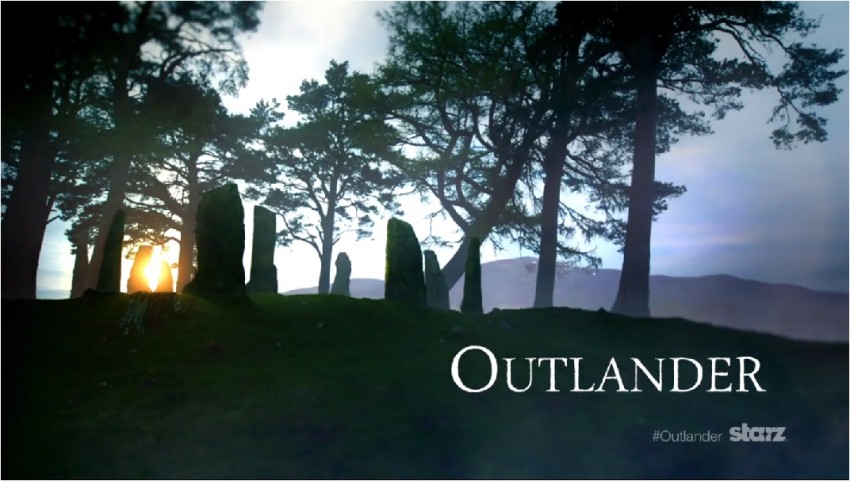 Outlander: Opening Title Sequence – Wait, Is That It?

Just back from ComicCon! What an experience. A GREAT experience – I had a fabulous time, and as much fun as you can cram into 48 hours, when most of that time was spent either sleeping or on planes. I flew out to attend the Red Carpet Premiere for Outlander, and visit with friends I had made at the Random House Retreat in Seattle. I had already seen the first two episodes of Outlander, but it’s a completely different experience seeing it on a big screen! Honestly, though, I think there will be nobody who won’t have seen it by the official debut on August 9.

When I first saw Episode 1 (Sassenach) two weeks ago, I was, of course, blown away, as I had hoped I would be. And unfortunately, even though many of you saw it, I am not able to actually review the episode, probably until next week (terms I agreed to when I got the early access). If you were not at Friday night’s premiere, the one thing I can tell you is that Sam is PERFECT. From the first glance. I don’t want to spoil anything for anyone, so I won’t even hint at anything else!

The Premiere started with a performance by composer Bear McCreary, playing two pieces, and then he was joined by his wife, Raya Yarbrough. Raya sang the song being used for the show’s opening sequence, an adaptation of Scottish folk song The Skye Boat Song, written about Bonnie Prince Charlie’s escape from Scotland (an alternate version, with the lyrics onscreen, is available at the bottom of this post). You can see both Bear’s first two songs – Loch Lomond, and then, as Bear explains, the love theme he wrote for Claire and Jamie, and then Raya’s performance, below.

Even though I can’t talk about the episode itself,  the one thing I can talk about, since Starz actually released it yesterday, is the opening title sequence. And unfortunately, I did NOT think this was perfect. (Feel free to leave comments – agreeing or dissenting – below!)

The song is beautiful, and very well done, and I’m planning to download it and sing along… but it wasn’t what I expected – or wanted for Outlander. And the entire title sequence felt like, as my friend Laura said, a 1980s Lifetime Movie opener. A Nora Roberts movie. And as much as I like Nora Roberts, her books and the films made from them are nowhere near Diana’s level. A compilation of short clips from the show, it didn’t feel fresh or exciting. And the song has a melancholy tone, which doesn’t fit the show, I felt. Claire is strong, opinionated, passionate, and while she may at times feel sad and lonely, that’s not how she carries herself. The title sequence, on its own, to someone who knew nothing about the books or the plot, would give the viewer the sense of a Harlequin romance.

When I first saw the episodes, I was hoping that what I saw as the opening sequence was actually a placeholder (fairly common to have temporary graphics or music in place when episodes are sent to reviewers in advance of their air date), and the second episode contained only a few seconds of music, followed by a card saying “opening sequence.” But since it was shown at the Premiere – and then released to the public yesterday – I think it’s pretty obvious that this is the final opener. Ron Moore, rethink! This isn’t anywhere near being in the league of Black Sails, Game of Thrones (which is FABULOUS – youtube it if you don’t watch the show), or other original premium cable shows. The opening sequence should grab a channel-changing viewer, make them stop in their tracks, sink into the nearest chair, and watch the entire episode.

I’ve been watching the comments posted on Facebook – it seems that there are quite a few of you who feel like I do. Ten of us took a limo to the Premiere (well, we were all dressed up, after all), and when we got back in the limo after the showing, we pretty much agreed that the opening sequence was disappointing. I know there are MANY fans who loved the opening – to each her own! Please comment below – tell me why you loved the opener, or what you would have changed, or what you had been expecting! And in the meantime, check out this beautiful version of The Skye Boat Song by The Corries.