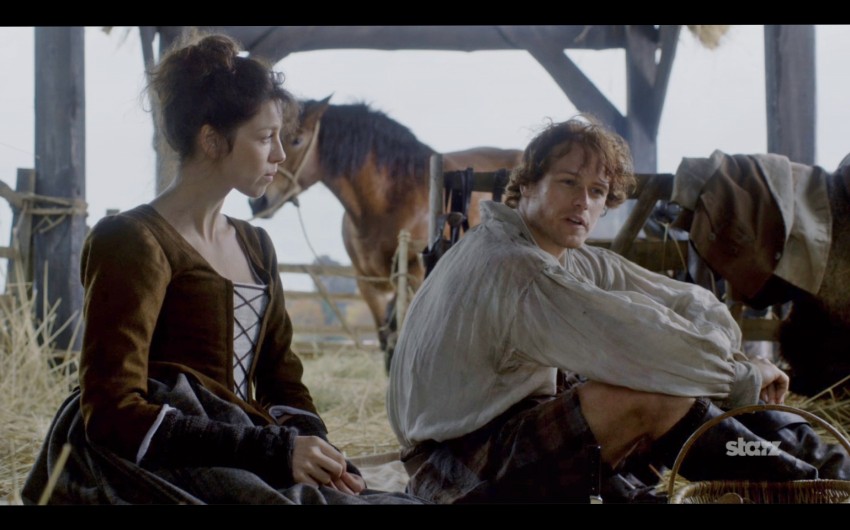 See the poll at the bottom – what did you think of Starz releasing several scenes from this episode during the past week?

(Author’s note: when you write reviews of a TV series based on a book series, you have to accept that not everybody who would come to your review site will have read the books. While we, the book’s faithful fans, know things not revealed in the TV episodes, non-book readers will know just what they see on screen. And in most, if not all, episodes of this show, there will be things we know that I am not going to talk about because they could be spoilers for non-readers. So PLEASE don’t leave comments saying, “but he really is!!!” or otherwise spoiling something. Feel free – I encourage you! – to leave comments, just be considerate of any non-readers. Help them to enjoy and discover.) 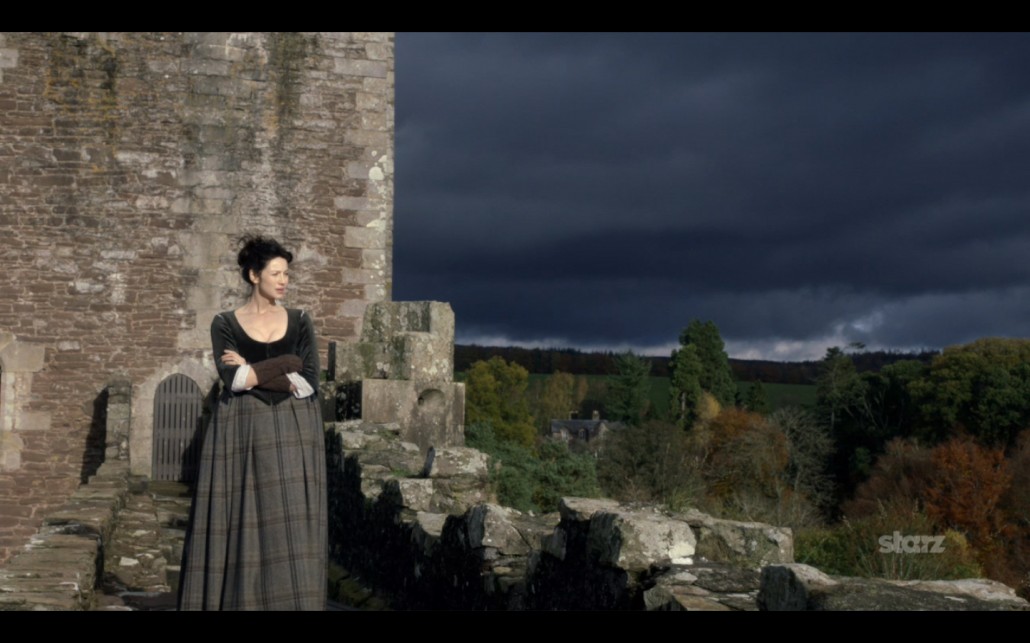 So Claire has finally accepted that something very strange has happened, and she really is in the past. She’s a realist, is our Claire, not a damsel in distress, and knows that she has to figure out how to keep from being imprisoned or misused. So the smartest thing to do is keep her mouth shut, smile a lot, play the sad innocent widow – can she do it? Nope. She confronts Dougal. She confronts Rupert. She spends time alone with Jamie. And are they happy to help this poor grieving widow get back to her family? Nope again! They’re even more suspicious of her motives and background.

Top moments and scenes: – Mrs. Fitz meeting Claire in the courtyard. “Claaaaaaaire.” Redeemed only slight by her concern for Jamie. Mrs. Fitz has her favorites, obviously – from the way she flies at Rupert, one wonders what’s happened there… and Jamie is everyone’s darling. 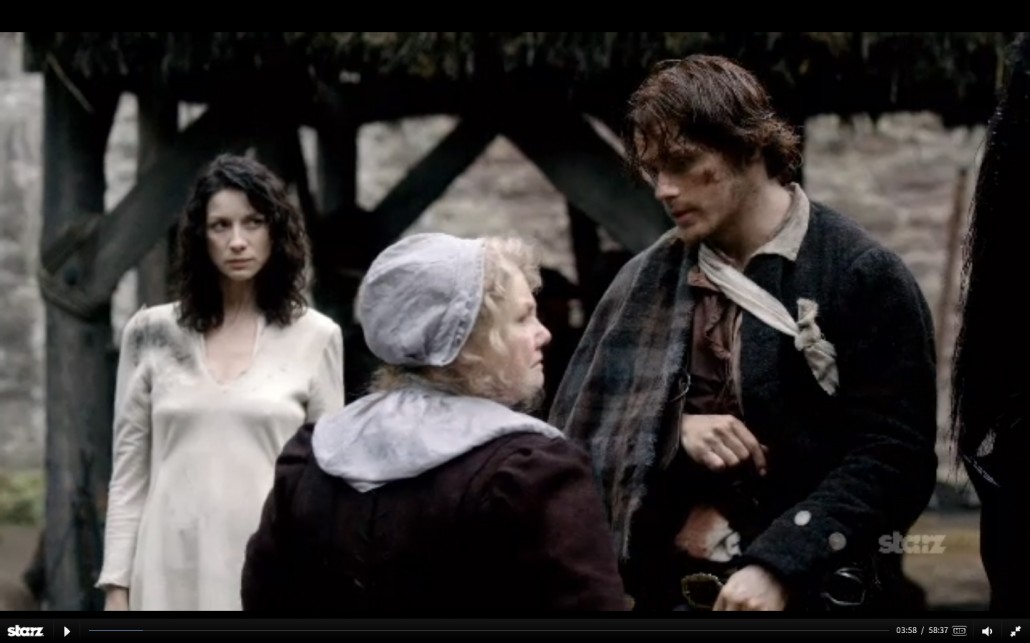 – The dressing scene. Oh, I am SO glad we no longer have to dress like that, or people would wonder why I always wander around in my shift. Diana Gabaldon has a cameo coming up (in the fourth episode, we’ve been told), and described the getting-dressed process like this:

It consisted of a knee-length muslin shift, knee-high green stockings (thick ones), reddish-brown shoes with satin ribbon ties, a set of stays (a corset) that went over the shift, the aforementioned petticoat (which they held for me and I sort of dived in, so they could pull it down over the shift and stays, and a bum-roll, which is just what it sounds like — wide hips were apparently sexy in the 18th century.

Stays. These lace up the back, and it takes considerable effort to get them adequately tightened. As in— if it’s done properly, you can’t breathe, though you do acclimate to this. You really can’t bend over, so my husband had to keep retying the ribbons on my shoes, until he gave up and double-knotted them. Does give you the desired wasp-waisted look, though, I’ll say that.

Anyway, once all these layers had been applied, my dressers put on the piece-de-resistance, an absolutely gorgeous dress designed especially for me by Terry Moore, head of the Costume Department (and more about that when I reprise the Tour in a later post). Crushed velvet, gold lace, MacKenzie tartan stomacher and sacque-back… and I can’t say more than that, but it was gorgeous. Once I was in it, they opened the door and invited in Crawford, the only (apparently) male employee of the Costume Department (though it employs 75 people on staff, and I didn’t see anywhere near all of them, so can’t swear to this), as Muscle was required to lace up the dress itself over the stays. 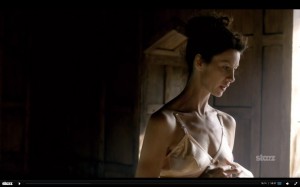 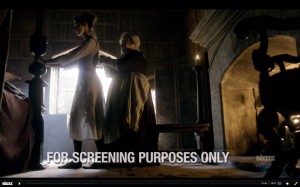 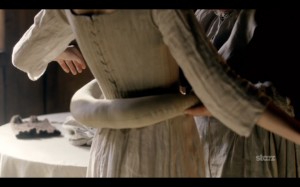 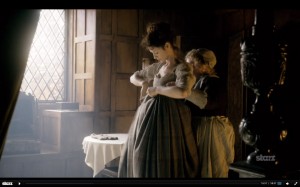 And Mrs. Fitz’s reaction to Claire’s undergarments – “What kind of corset is that?” was priceless. – Of course, the scene at Lallybroch – and I just saw something over on Facebook about wanting to put a disclaimer on every episode saying “no bodices were ripped in this episode” – a dig at critics mistakenly categorizing the series this way – but look, Black Jack just ripped Jenny’s bodice! You can feel Jamie’s humiliation, his worry for his sister (“Sister? That’s interesting”). 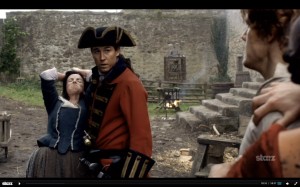 – I loved the way Jamie tells the story of his outlaw status to Claire – “chickens are verra poor company.” He sees in her something trustworthy and attractive, admitting that he’s given her some valuable information, and implicitly trusts her not to use it against him. And who wouldn’t like to have had the opportunity, like Claire, to sit in the shade with him and share a lunch? Nobody. Nobody’s going to turn that down. Too bad none of us get to. 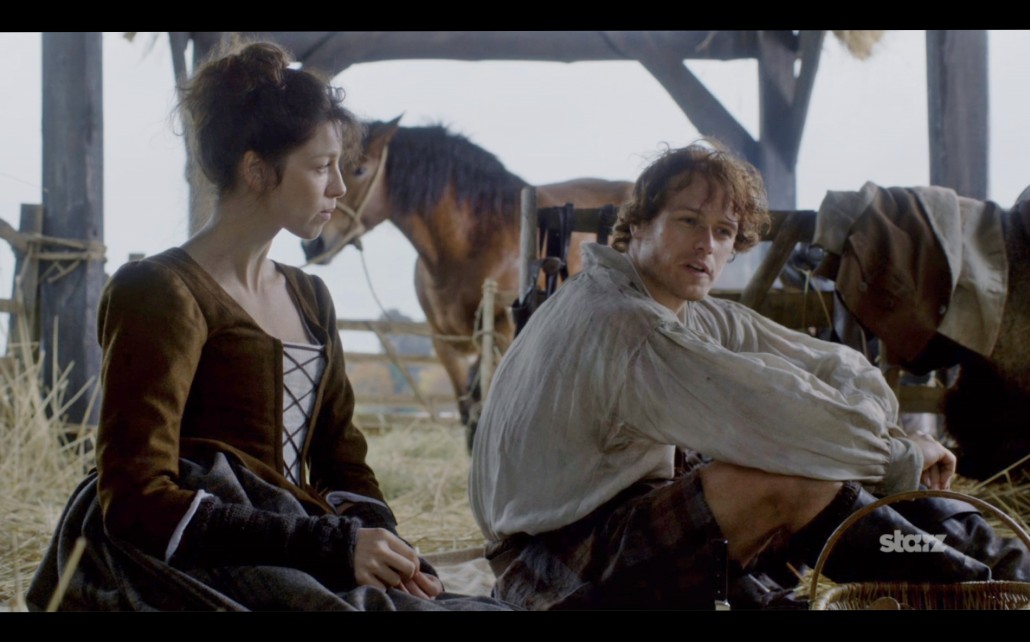 – Claire’s conversation with Colum at dinner was interesting. Her outspokenness is so unlike a woman of the 1700s that it has to increase her strangeness to the Highlanders. Of course, they couldn’t possibly conceive of the idea that she isn’t really a woman of their times, but they can’t figure out who or what she is, either. Her vague answers to Colum’s questions and her slip with Hamish, identifying him as Dougal’s son (oh, the looks that go between Dougal, Colum and Letitia!) only increase their suspicions.

– Hall and Colum’s stockings. The photo below came from the reviewer copy I received, and I could swear that the stockings were like this in the first broadcast (I went back while we were watching and pointed them out to my husband, but in the second broadcast, the stockings are white! In Ron Moore’s “Inside” video, he talks about using the patterned stockings as the CGI visual cue to put in the deformed legs.) The first sight of Colum and his bowed, painful legs, is of course, earlier up in his study, but watching him walk the length of the hall was difficult. 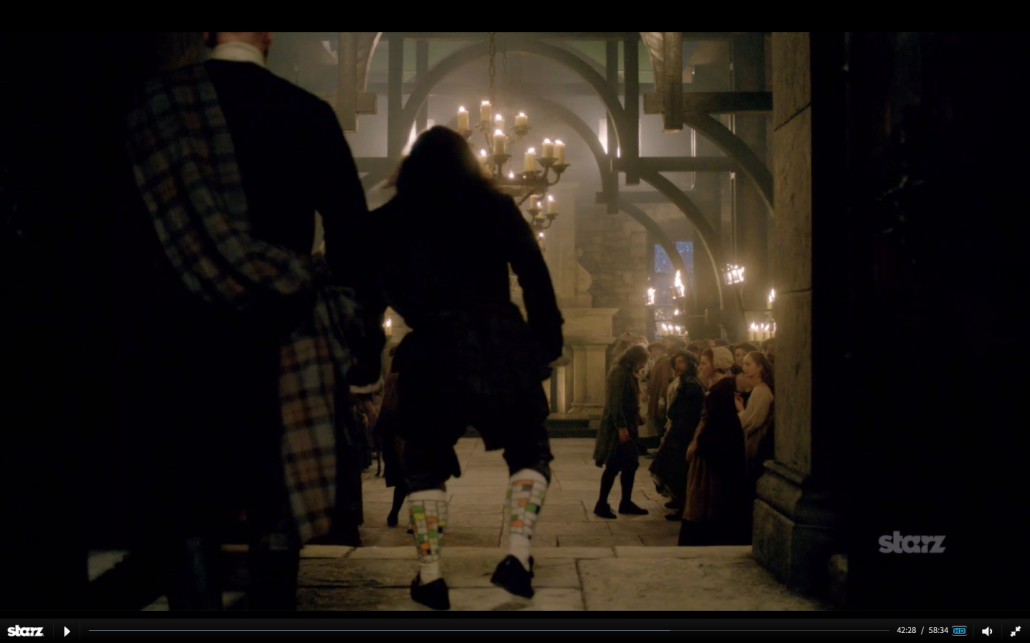 Here, we get more of the un-subtitled Gaelic – but helped by Geillis’ whispers to Claire, it was pretty easy to get the idea. And when Laoghaire (if you haven’t read the books, that’s pronouned Leery, the young girl brought in to be whipped) is dragged before Colum, and Jamie volunteers to take her punishment, we may not understand everything he says, but you get the idea. 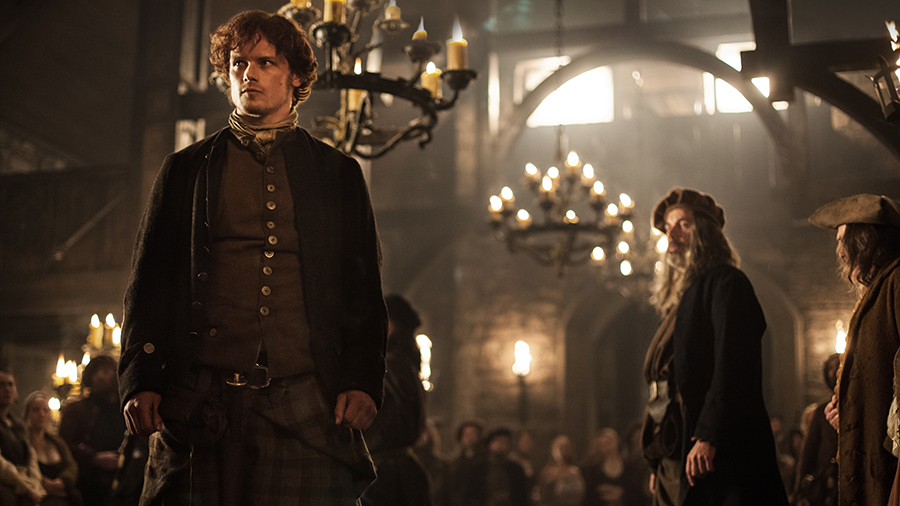 – And finally, Claire expects to leave with the tinker to head toward Inverness, but is stopped by Dougal and taken to Colum. Down in the room in which just days earlier she had a romantic tryst with Frank, you see her fear and her determination. Even when she’s told – not asked – that she will be staying at Castle Leoch, you know this a woman who will do what she thinks she has to do, even if it’s not what might be safest. “I believe you have secrets, Claire. Maybe they’re the kind of secrets every woman has, and pose no threat to me, to Castle Leoch or to Clan Mackenzie. But until I know for sure, you’ll be staying here as my guest.” “As your prisoner, you mean.” “Only if you try to leave,” which we know for sure she will try to do. 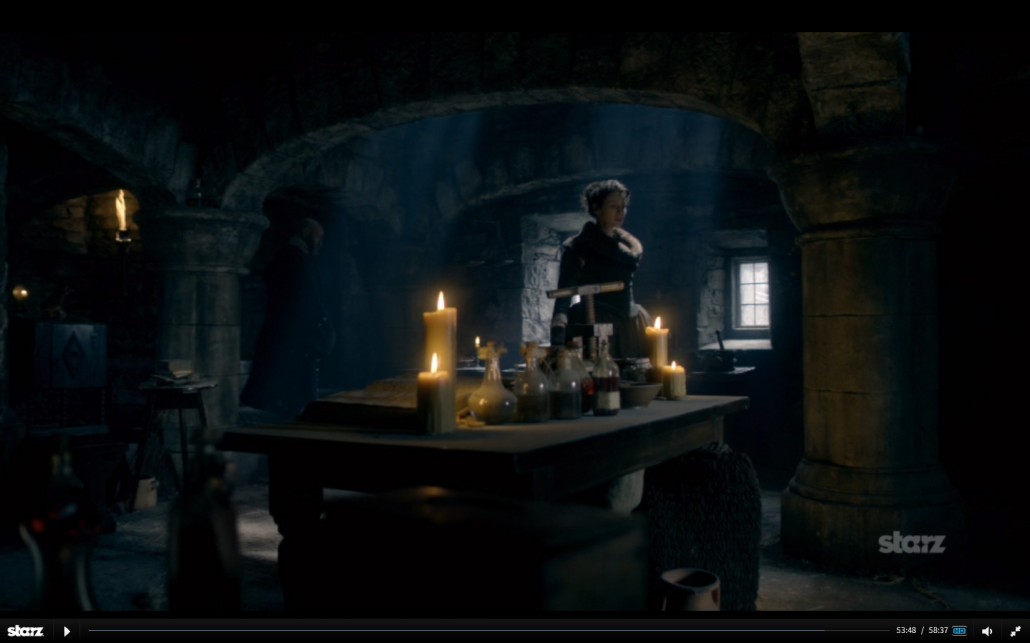 Character scorecard: Caitriona Balfe as Claire is starting to grow into her character. In the first episode, I wasn’t sure that she would be up to the task – her emotional range didn’t seem large enough to handle this. I’m still not completely convinced, but I’m more than willing to watch her figure it out. Jamie – perfection. Love the curly mop of hair he has in Hall, his bravado in taking Laoghaire’s punishment, his look of resignation as Claire is about to see his back for the first time. Did EVERYONE wince? Of course you did. 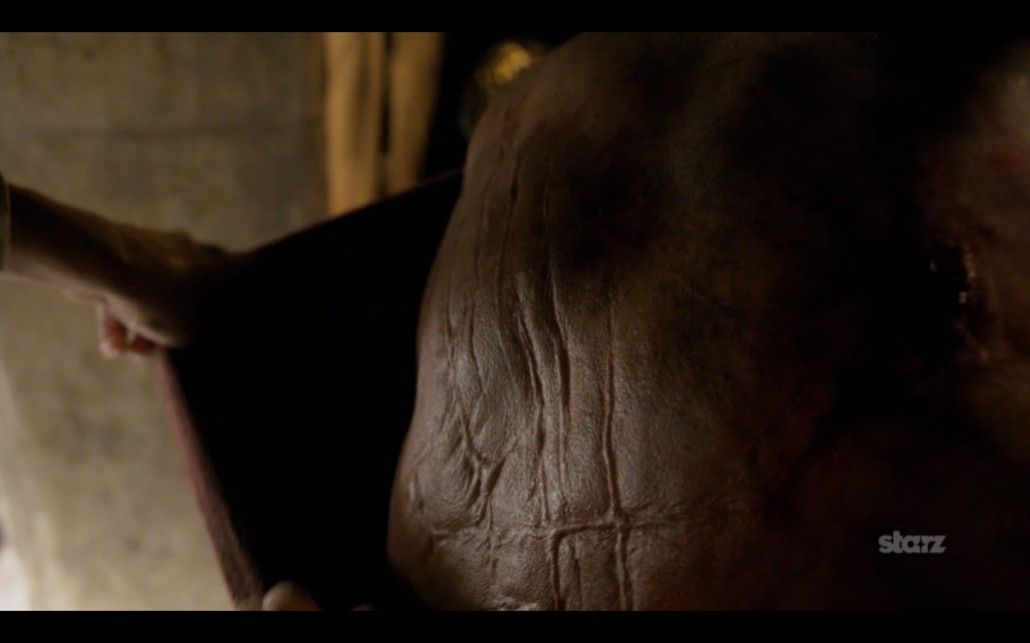 Dougal’s subtle, silent commands, his required subservience toward Colum – you know this is a man of strength, a man itching to be the clan leader, but he understands and accepts his role as number 2. 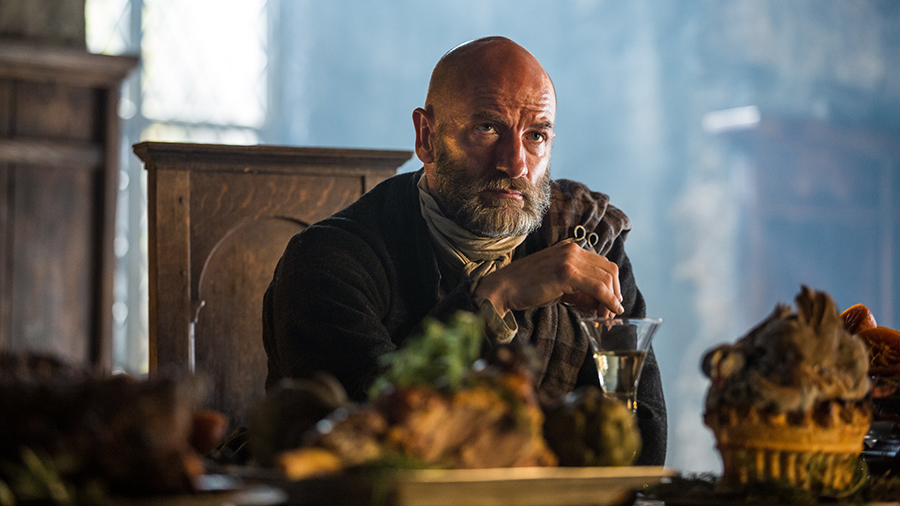 Mrs. Fitz’ sneer when she sees Claire for the first time was wonderful, and even though we don’t see much of her, you get the feeling that you would like to have her as a friend. And Geillis Duncan – there’s something about her accent that’s troubling. Lotte Verbeek is Dutch, and perhaps that comes through a little? There’s something off-putting about her high-pitched, young-girl voice – I think it’s going to take some time to be able to see her as this character, if it happens at all. 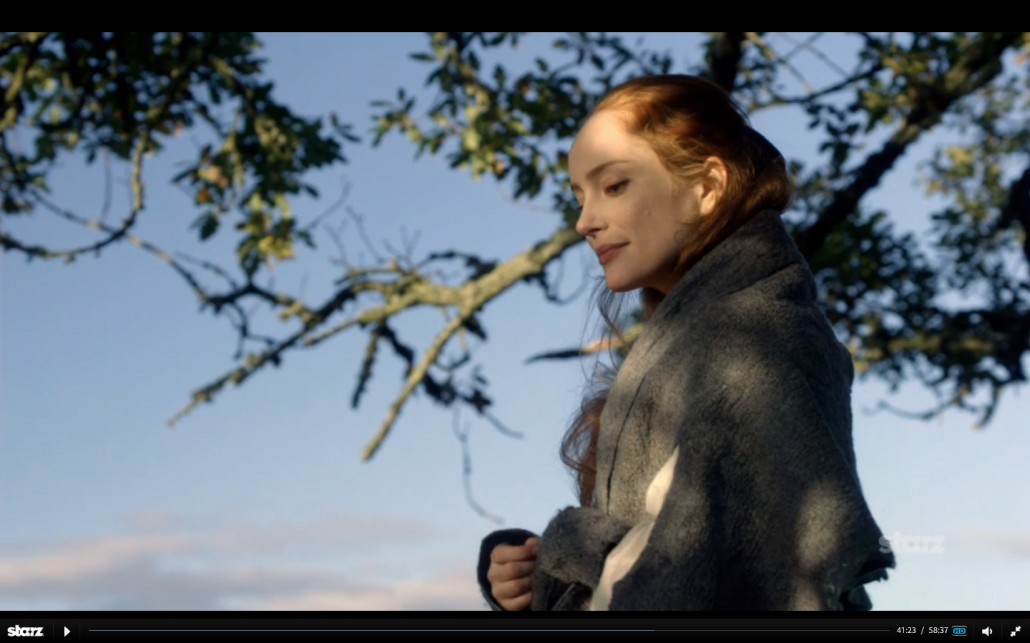 I know you’re going to watch this episode more than once – make one of them a viewing with Ron Moore’s podcast. His narration last week gave all kinds of great tidbits, production notes, even some insights into possible future DVD extras! You can find the podcasts here – go all the way to the bottom of the page and click on “Chat with Ron Moore.” The podcast will download, and then you can listen while you watch your DVRd episode! One tidbit I enjoyed from the cast last week was about the lighting – in the scene after Frank sees the ghost looking up at Claire and the power has gone out, lighting was all by candle- and firelight, which brought a great realistic glow to the room. It looks like director John Dahl used the same natural lighting technique in this episode – down in Claire’s new surgery at the end of the episode! And finally, did you watch the scenes that Starz released through the past week? Take our poll and tell us how they helped or hurt your enjoyment and anticipation of tonight’s episode.

Subscribe to threeifbyspace to get immediate notice of new posts