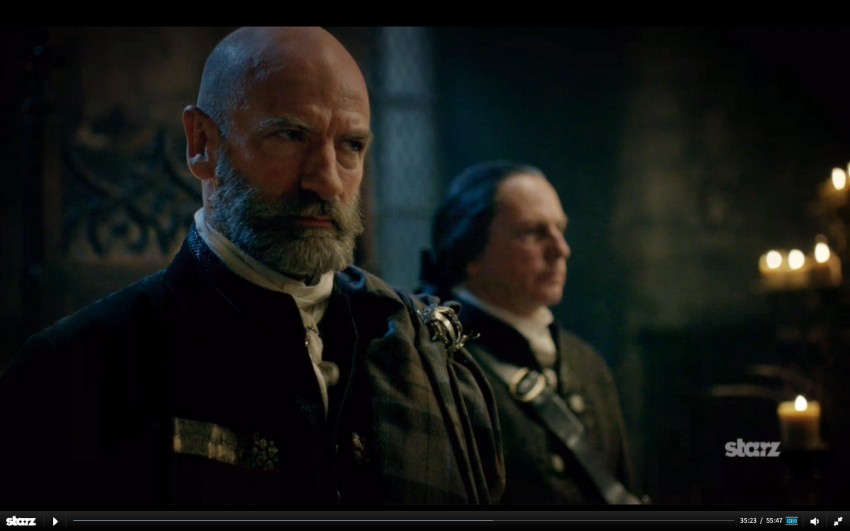 Our girl Claire’s got some skills! Too bad she doesn’t have any good luck. Even under the eagle eyes of Rupert and Angus, she’s figured out how to use the castle’s kids, including young Hamish, to unwittingly help her reconnoiter the grounds. She’s stealthily gathered a store of food for her trip; she’s brewed a sleeping potion for Moe and Larry; and figured out how to acquire a horse without also acquiring suspicion. Damn, girl, you got it going on! 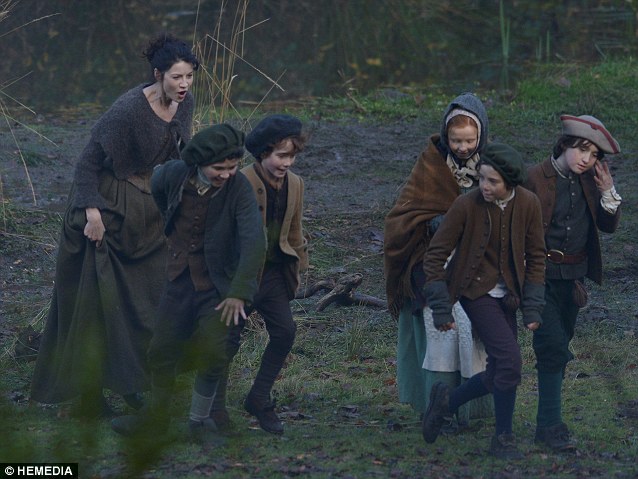 We’re four episodes in, a quarter of the way through, and I think the production is hitting its stride. I wasn’t convinced, after episode 1, that Caitriona Balfe had the emotional range or ability to play Claire, a woman who can’t hide anything, who is strong, stubborn and determined. But the past couple of episodes have seen a huge growth in her abilities – and I think she’ll continue to grow.

The use of voiceover in this episode was different, too, as if the writers are now more confident in the audience’s ability to understand this world without being led. And the writers are more confident in their ability, also, to show us this world, as they understand it better. This episode was written by head writer/producer Matt Roberts, who actually started this whole process – he recommended the books years ago to Maril Davis, who in turn, along with Terry Dresbach, recommended them to Ron Moore. And Matt’s love for the books shows in the sensitive handling of key scenes in this episode – Jamie’s oath, Dougal mourning the death of Geordie. Both show great depth of care for the inner conflicts these characters go through. 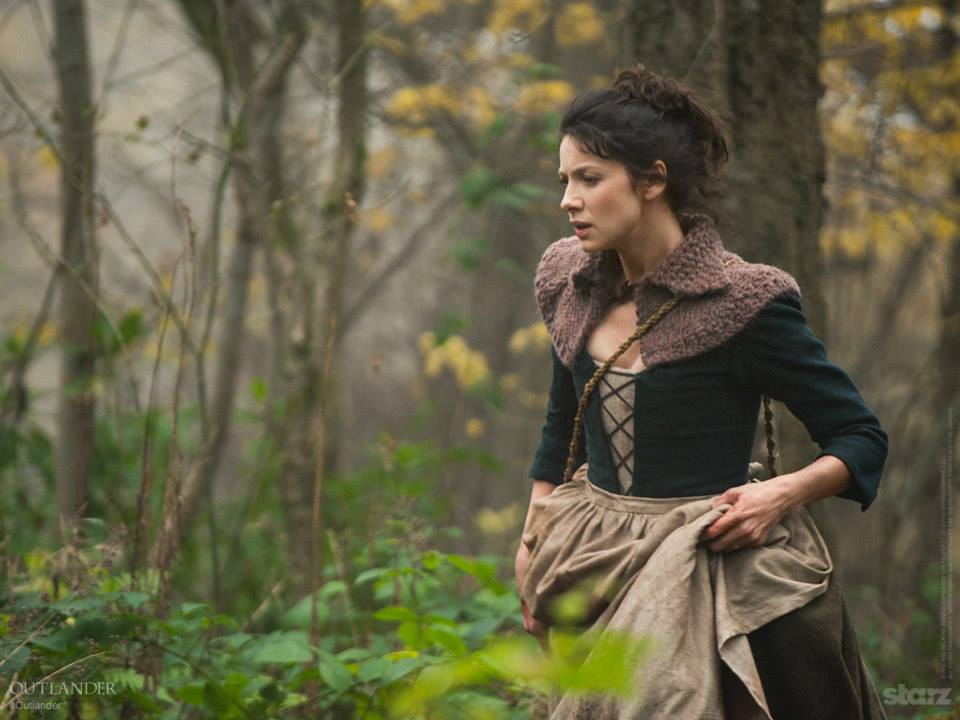 There were several interesting, standout moments in this episode. First, obviously, are cameos by Diana and Ron. I loved seeing how they worked Diana into the show, giving her a couple of funny lines (shooshing Murtagh as he explains the ceremony to Claire). Ron’s cameo was blink-and-you-miss-it, but they both looked fantastic. 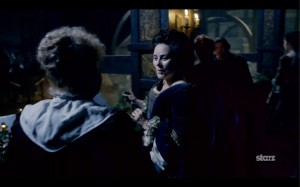 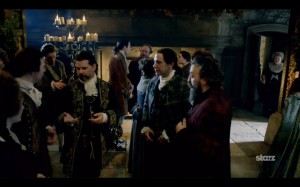 Claire’s encounter with Geillis in her surgery was revealing. Does Geillis suspect Claire’s origins? Is Geillis something other than what she seems to be? She not-so-subtly questions and hints, telling Claire that “this is no time for a woman to be alone,” and talking about when she first arrived in Cranesmuir – how did she really come to this remote Highland village? Hmmmm? And as a side note, her dress in this scene was beautiful, simple but lovely. 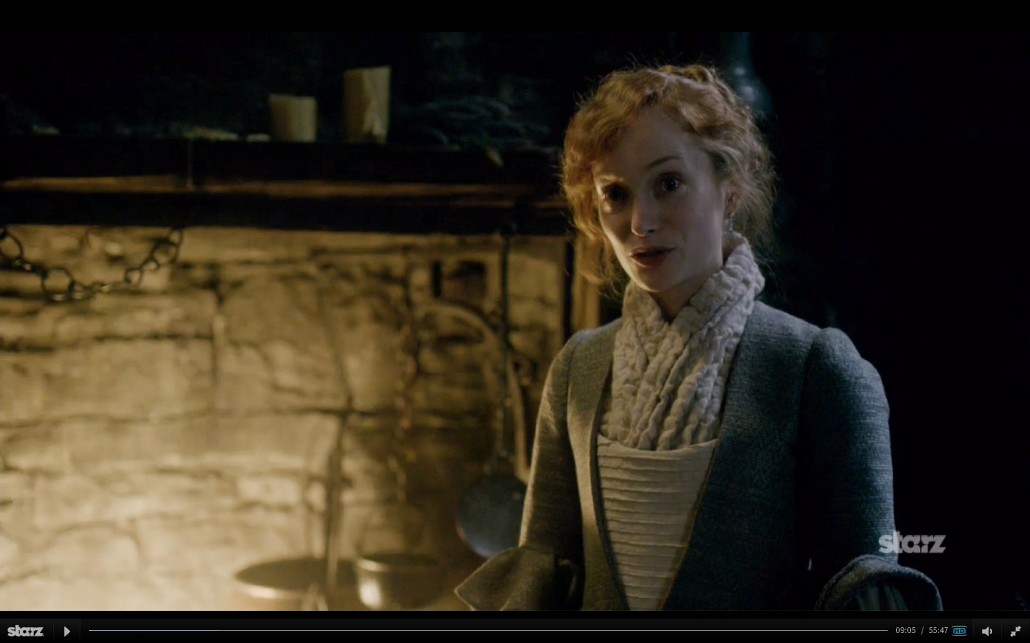 I loved the nod to the Wizard of Oz, which would have come out just a few years before Claire went through the stones – she tells Laoghaire to “click your heels three times and recite, there’s no place like love. There’s no place like love.” Good thing Laoghaire doesn’t know she’s being given horse dung as a love potion – it would work just as well as anything else Claire could give her, since, as the girl said last week, “It’s not me he fancies.” 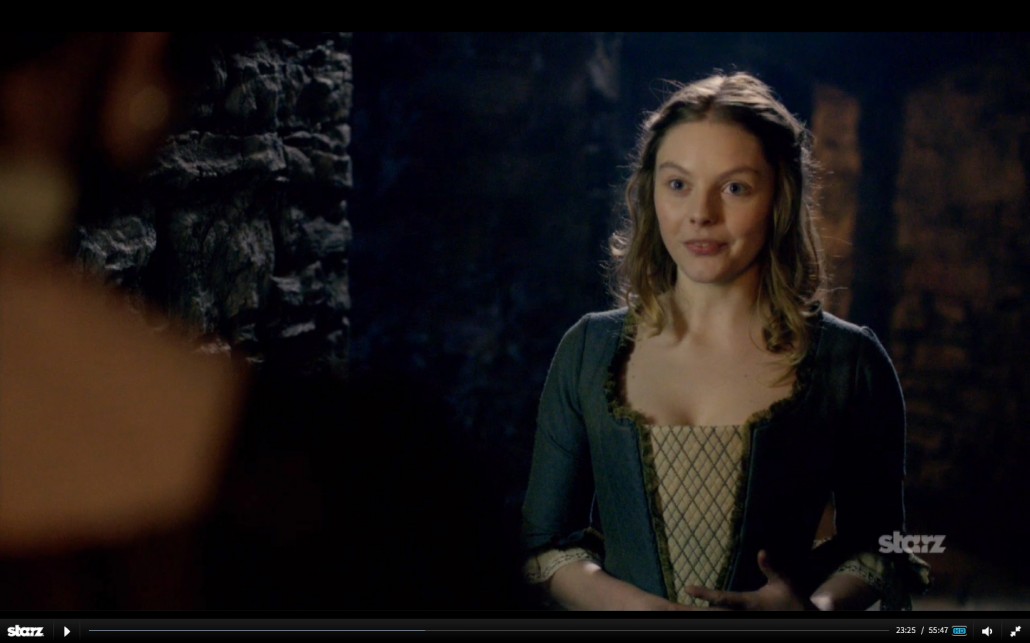 Dougal’s oathtaking, on its face, wouldn’t cause anyone to pause – of course Dougal would swear allegiance to his brother. But before he bends the knee, he takes a breath – what is this pause? Mental preparation? Resignation? We know, from Murtagh’s explanation of why Jamie can’t swear the oath, that Dougal has designs on the lairdship – does he think, perhaps buried in his heart, that Colum should step aside, because of his physical limitations, and let Dougal move into the seat of power? If Colum were to step down at this point and designate Dougal as his heir, the Mackenzie clan would surely agree – Hamish is too young, Dougal is respected – and Jamie hasn’t yet proven his worth, especially since he is currently an outlaw. But Dougal knows that Colum is not ready to do this – is he impatient? But he has no choice – he swears the oath out of loyalty, of course, but also with a feeling of time running out. 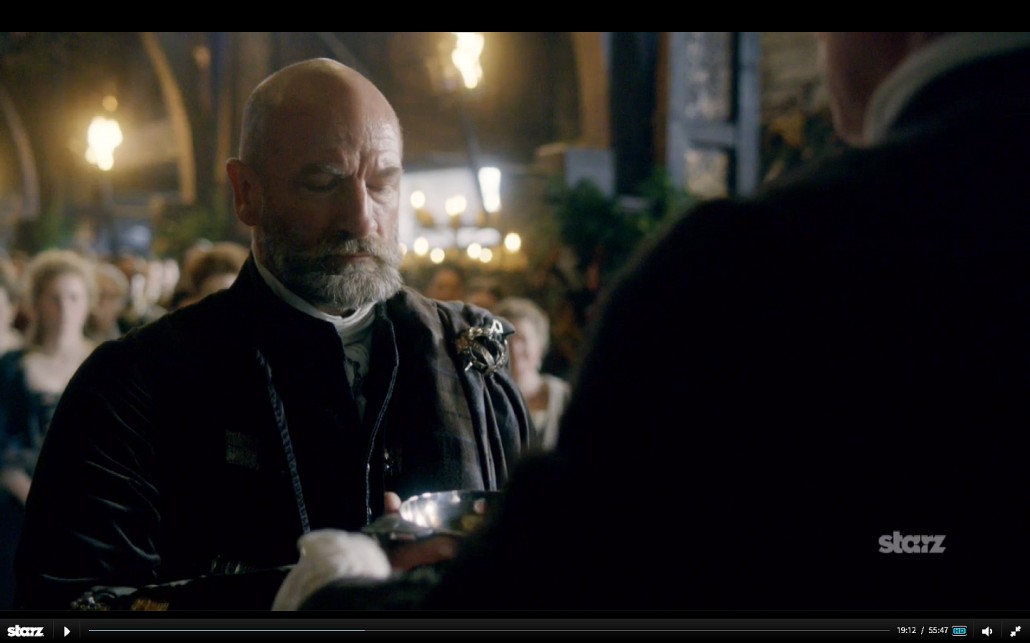 When Claire makes her way to the stable, after encountering the clansmen who assault her and Dougal who at first rescues her, then attempts to extract a “penalty” for wandering the corridors, she hits the wall, in the person of Jamie. He tells her that she couldn’t succeed, the best trackers are in the castle. I love the way she tells him the story of meeting Dougal – “and then I may have walloped him with a chair, or something.” And Jamie is very amused at this story – he knows that Dougal was too drunk to really remember what had happened, and wouldn’t admit to it anyway. 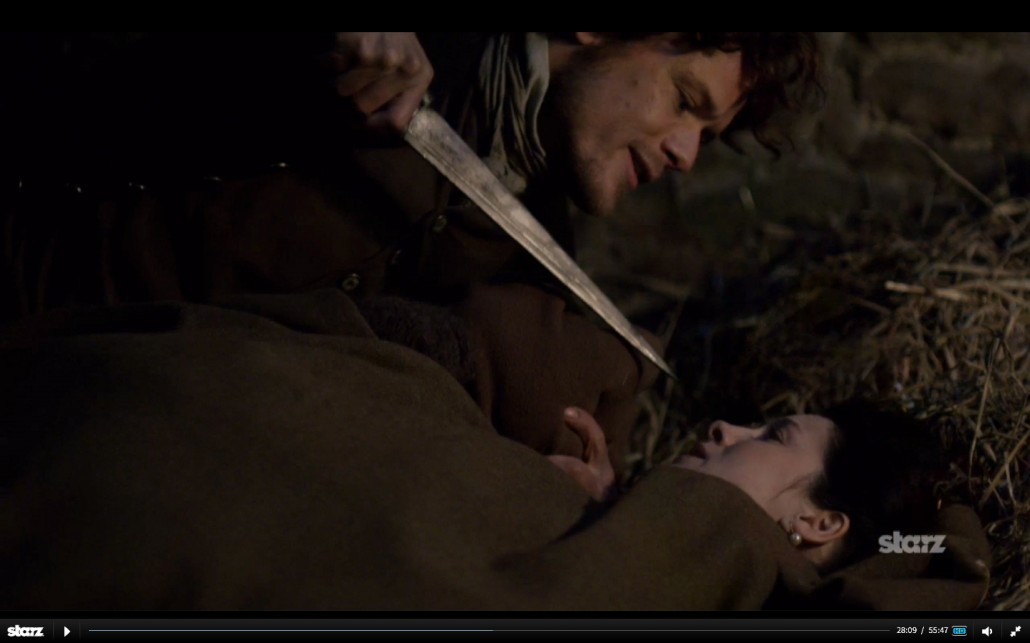 Did you catch all the obstacles Jamie faced at the Oathtaking? In the beginning of the episode, Alec tells Claire that it’s better if Jamie is left to himself during the Gathering, as he understands the gauntlet Jamie must run if he can’t avoid it completely. And when Claire must be brought back to the castle, you can see that Jamie knows, as Claire does not, that this isn’t just a simple escort. She still has no idea who he really is, not even knowing his true last name, but you can bet that every man in that Mackenzie hall knows exactly who, and what, he is. As Murtagh, in quiet desperation, explains to Claire, Jamie is a threat to Dougal’s claim to becoming laird – Jamie is liked and respected, is educated, and has proven himself in battle. So should he give his oath to Colum, that’s his declaration that he sees himself as a Mackenzie, and a contender. But should his decline to swear fealty, he is a traitor – he can’t win either way – and Murtagh fears for Jamie’s life. 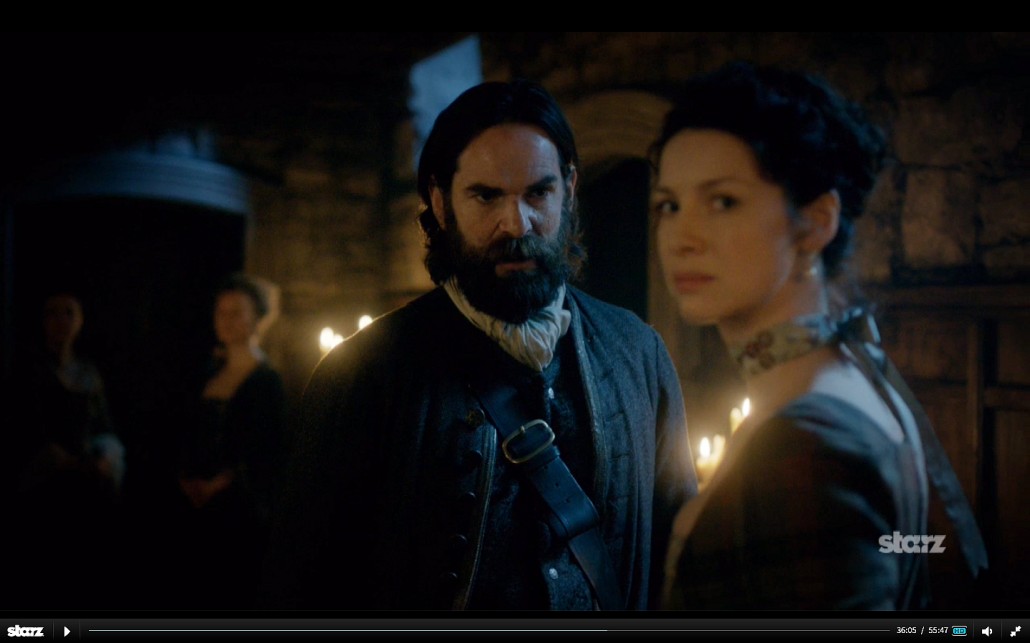 But Jamie finds the one way possible to wiggle out of the dilemma. You can see it in Colum’s face – watch what you say, lad, you’re my nephew and I love you, but I can’t save you. And Dougal – is he hoping Jamie will trip himself up, so he can be eliminated? Dougal’s motives are suspect, no matter how the evening goes. Jamie, though, gives Colum his obedience, swearing only to give him loyalty as kinsman and the Mackenzie chief, while not acknowledging Colum as his chief. And Colum accepts this, as an intelligent man long versed in political maneuvering, which means that all of his men must accept it as well. 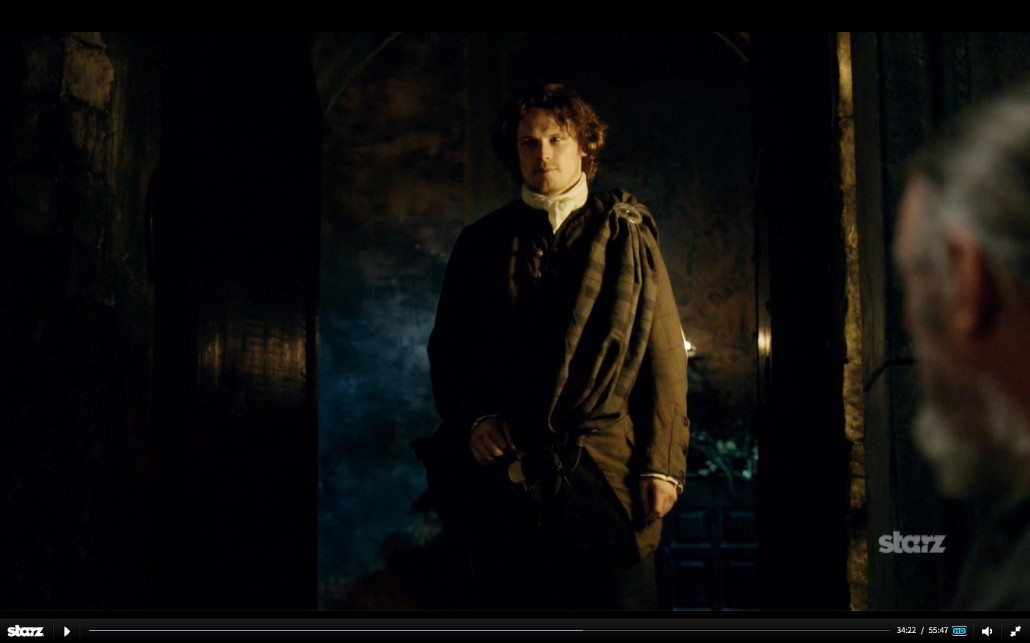 Rupert and Angus, the Laurel and Hardy of the Highlands (well, more the Laurel and Laurel), kept me laughing all episode. They’re so clearly unhappy to have to be chasing her around, instead of attending the “festivities.” And Angus, guzzling Claire’s sedative-laced port – she even tells him it’s a sedative – was too funny. But during the boar hunt, Rupert shows that she’s had an effect on them as well, as he tries to warn her of the dangers and keep her close. 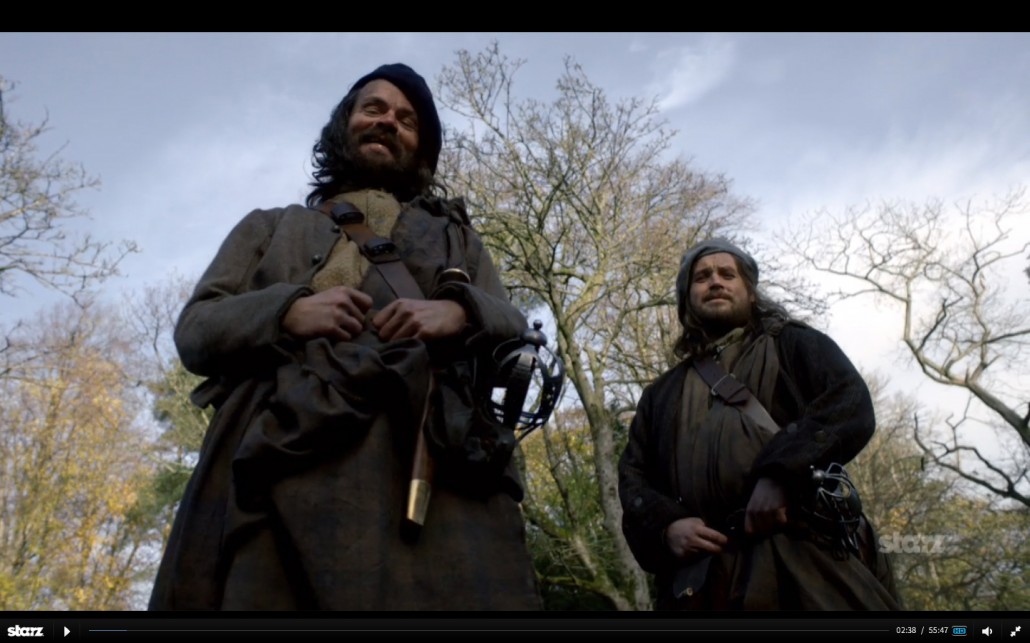 And that boar hunt – the clansman banging on shields, driving the boars out – the danger is real, as two men are injured by the large, sharp tusks of these ferocious animals. Dougal saves Claire at the last second, but shows his strong leadership and loyalty to his men when one is not only injured, but fatally gored. “Tell me, did you bed my sister Dorene?” Geordie asks him, recalling a cattle raid many years ago. Words catch in Dougal’s throat as he says that yes, he had; and Geordie tells him that was a good thing, that the lasses were lucky. Claire hasn’t always – or ever – gotten along well with Dougal, but they worked together to give him a good death. 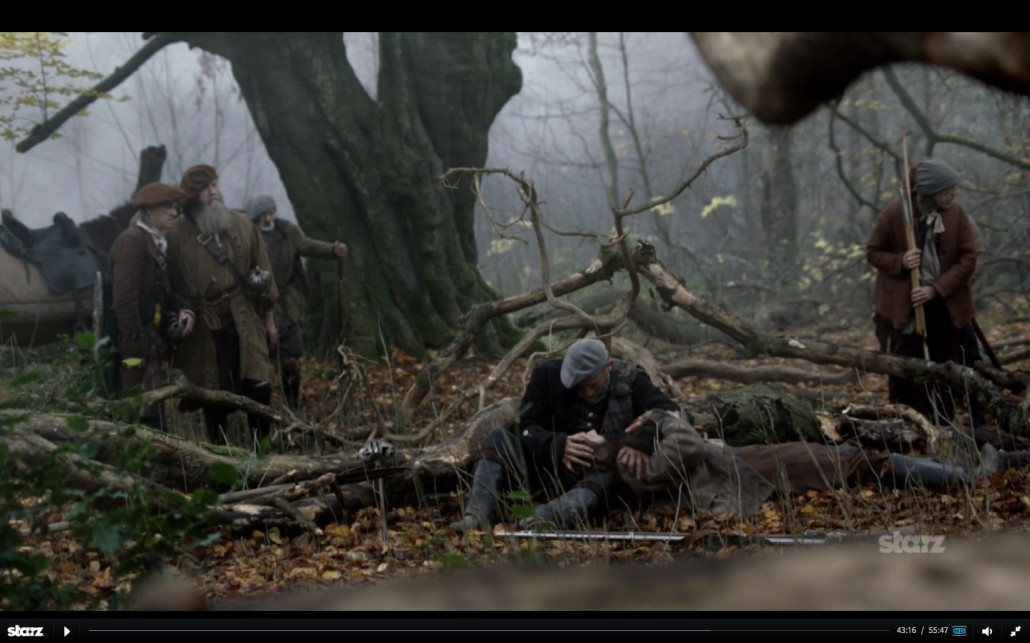 As they return from the hunt, Dougal sees a rousing game of Shinty  going on – the perfect outlet for his need to pound someone. So he takes both his grief over Geordie’s death and his frustration at Jamie’s ability to wriggle out of the Oath situation out on Jamie. They’re well matched, and the game is very exciting – until the younger, more agile Jamie is able to (prophetically?) best his uncle and end the match. And as they walk away, you hear Jamie say, “Did we win?” 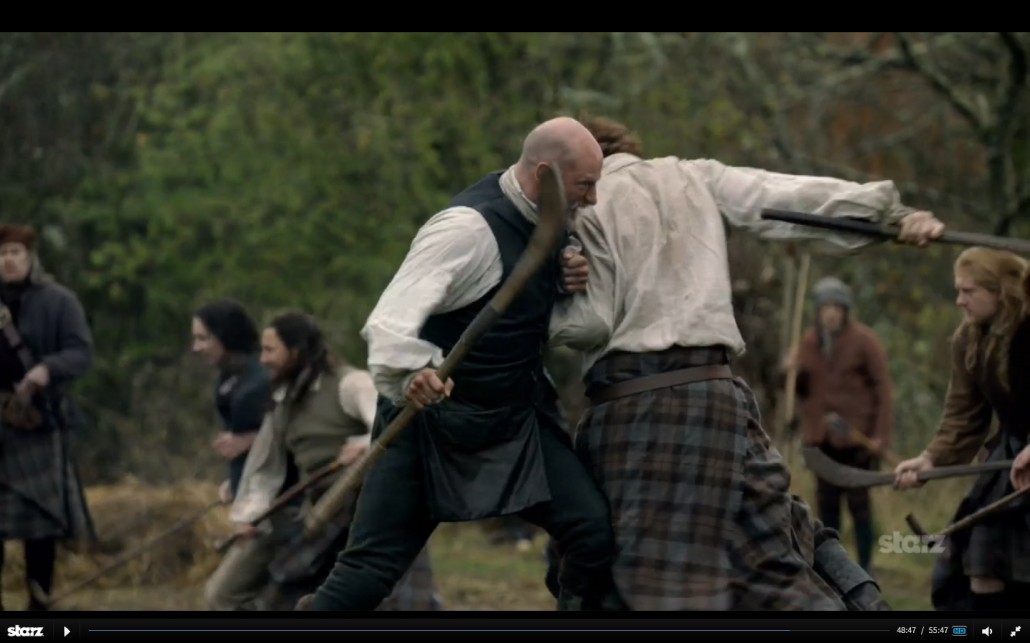 First quarter report card – Performances are generally excellent, and those that needed some time to improve are improving. Costumes and sets are fantastic – the detail is amazing. So much credit goes to Terry Dresbach (costumes) and Jon Gary Steele (set design)! Differences from the book are interesting, and very few of them bother me in the slightest. I’m excited to see what’s coming up the rest of this season. And just because, here’s one more pic. This one’s been very popular tonight: 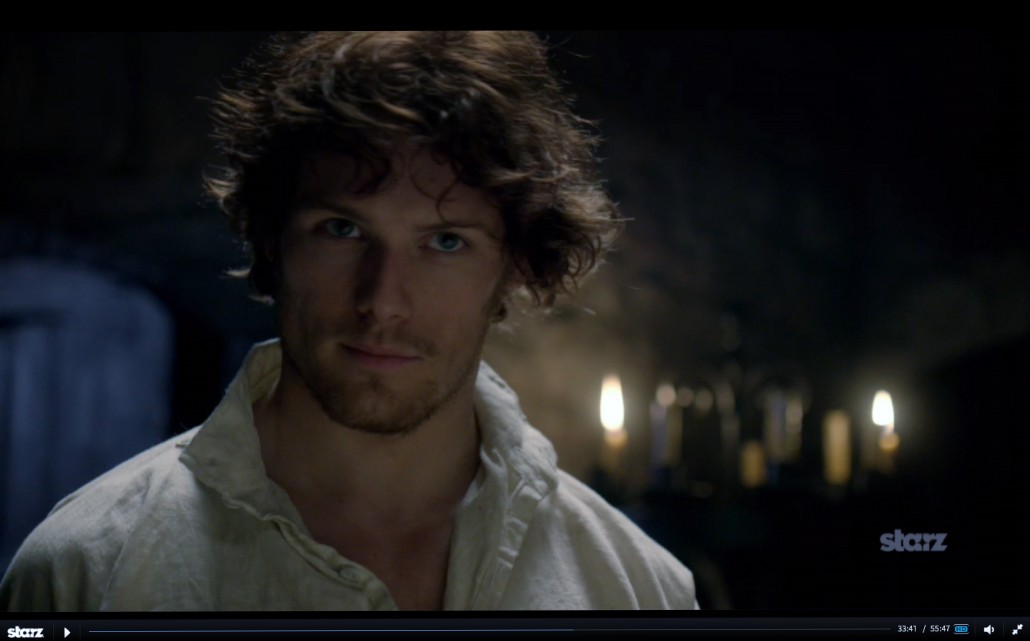 Go Inside the World of Outlander (weekly video)

Excerpt from The Outlandish Companion – Diana’s Theory of Time Travel