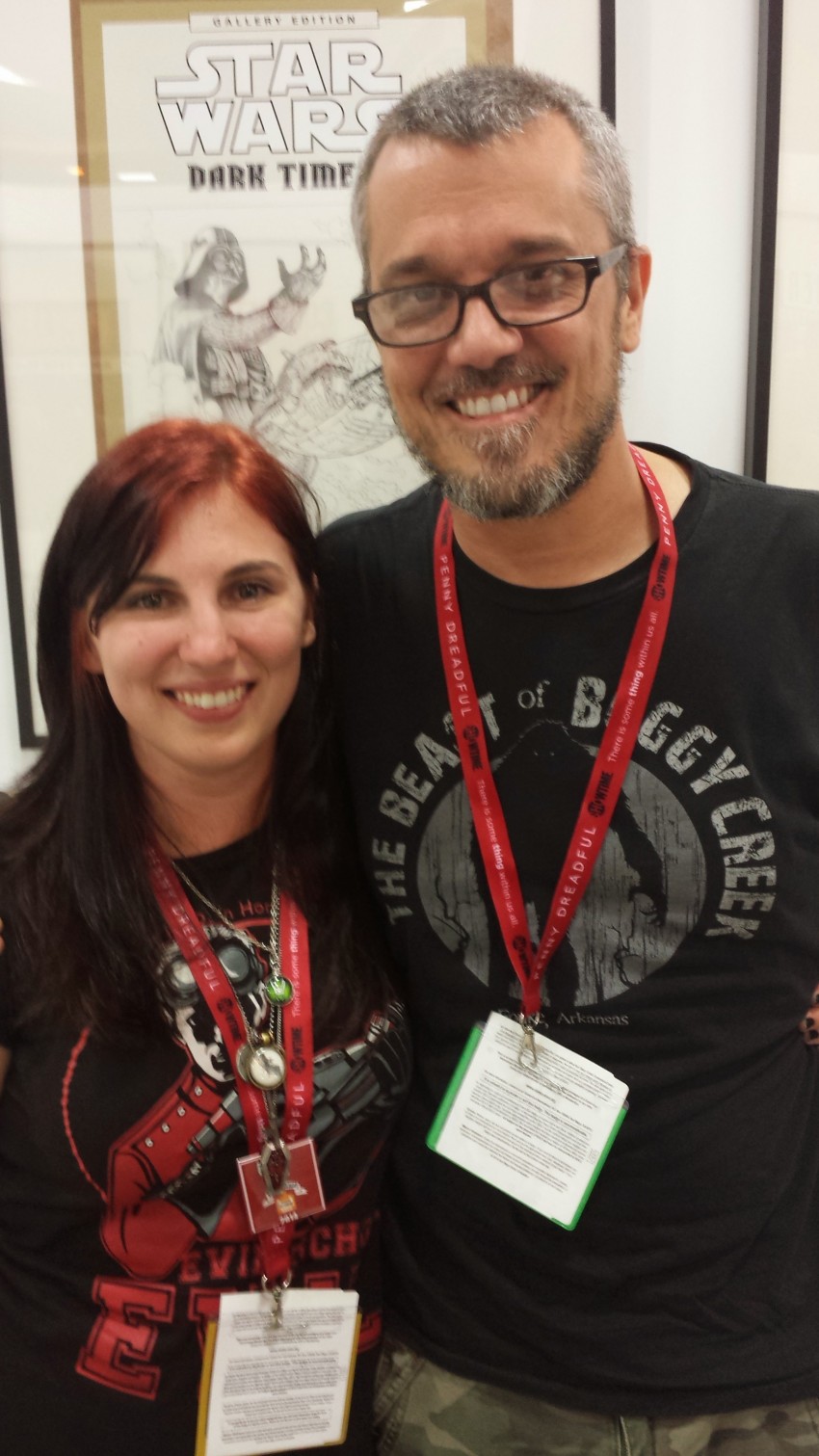 TIBS sits down with Steve Niles at Comic Con 2014

Three if By Space had a chance to sit down with Steve Niles, author of Criminal Macabre, and many more, during San Diego Comic Con and discuss his experience writing monsters, his musical interests, and his recent move from Austin.  Don’t forget to check out Steve’s most recent endeavor Breath of Bones and the new Criminal Macabre series! 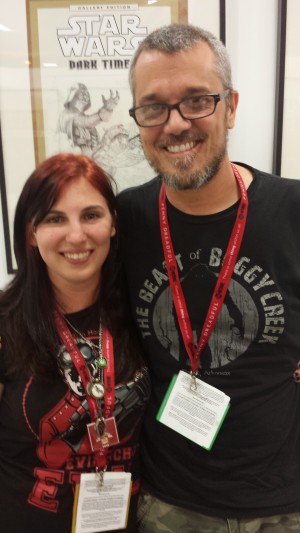 Three If By Space- With Breath of Bones, how did it feel writing a horror story based on that era’s most horrific experience?
Steve Niles-I definitely wanted to be careful, because I’m not an expert on World War2 and I wanted to make it relatable. There’s a couple of really subtle things that I did, and I don’t know if anybody noticed but I don’t say what country it is, and I never say what year it is. Honestly, what I did is I turned it into a fable almost, you could move it around. Chances are it’s Poland, but you could definitely move it around. The entire world was fighting! I wanted to be careful, it’s really funny because I have no problem writing about my religious stuff, ‘Jesus with a Chainsaw!’ ya know? I don’t care. I wanted to be very careful with somebody else’s myth. I was more careful about that than the World War 2 stuff. Dave helped me tremendously, because I wrote ‘tank’ he looked it up, he looked up the planes, he did all the research that really helped me out. If I had been bogged down with all the story I would have missed all of the emotional stuff.

TIBS- That’s cool it worked out that way, was it a natural flow?
SN- It sort of happened that I brought it up, he said “Ah don’t worry about that I’ll make it happen.”

TIBS- Was there any World War 2 story that you referenced?

SN- There wasn’t really, I tried to find other Gollum stories and I tried to find other supernatural stories. There really aren’t very many “supernatural” WW2 stories. There’s the beginning of Hellboy, there’s one called “The Keep”.  Everyone should watch it! I’m totally against remakes but I wish that somebody would remake that. The soundtrack and the acting are horrible, the soundtrack is like ‘eeee’ but I would love to see that one redone. It’s sort of like the ‘Nazi’s releasing the devil’ kind of story. 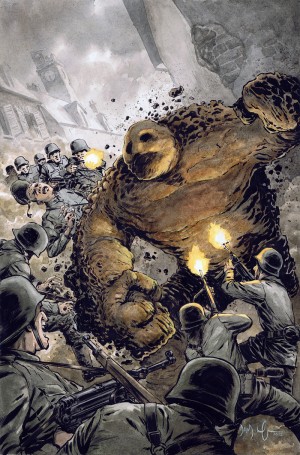 TIBS- What was your first experience with monsters? I know it’s a big aspect of your career.
SN- My earliest memory of any monster is when I was a little kid I was really obsessed with monsters but I loved Frankenstein’s Monster, King Kong, Creature from the Black Lagoon, and they would make me cry. I was a little kid and I would always be like “why don’t they leave them alone?” I couldn’t understand, so I think that’s why I got pulled in that direction of the sympathetic monster.  I think King Kong was the first one I remember bawling, I remember at the end, and I was like 5 or 6, and I said “Why did they kill him?!” and I was so upset. So I started in a very sympathetic place with monsters.

TIBS- Did you start specifically writing monsters or how did that come about?

SN- 6th grade me and my friends would write stories to entertain ourselves. I wrote a Walking Dead when I was in 6th grade it was called “And in the End”, pretty artsy for a 6th grader I thought, and we would write these zombie stories about our friends. Make up fiction about our own lives and do drawings, so I started pretty young! 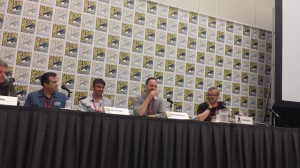 TIBS- If you could switch places with your editor, who would you choose to write either Breath of Bones or Criminal Macabre and who would you choose to draw it?
SN- I have to think… Some of the writers right now are so cold! I think Rick Remender would do it, Ricks’ a buddy. Because Breath of Bones has such a heart to it, but I think my buddy Rick could do it and for art my first choice was Gabe Hoth, and he said “I can’t do it but I know the perfect guy” and recommended Dave Watcher.

TIBS- Who was the last band that you saw live? I know music is very influential for you.

SN- Yeah, The Damned at Disney, Disney did a thing in Anaheim with them. So Monica and I went and splurged for the old people seats so we got really good seats and were dead center and they were wonderful!  We’re both old punk rockers!

TIBS- Is there any type of music that you tend to stay away from when you write?
SN- I have to avoid lyrics in general, lately I’ve been writing to Django Reinhardt, which is actually pretty upbeat, but it’s instrumental and very complicated. Mostly it’s soundtracks but I have to avoid lyrics. Like I can’t put on Bad Brains, if I write to them I don’t know what the hell’s on the page!

TIBS- Have/would you ever written a story based off of a song you love?
SN- Oh yeah! I used to, I’m trying to think of any I did specifically there was so much with the music scene I grew up in. D.C in the 80’s and 90’s it was heavily political, I was writing stories and lyrics but I can’t think of anything where I wrote a story actually based on a song, I feel like I’ve done it before but it’s hard to remember.

TIBS- What would you love to be able to see happen live? Is there any specific band or concert or anything?

SN- Actually, if anything I would love to go back in time so I could be a movie theatre worker when Frankenstein came out, so I could see those people wig out because I can’t even imagine what that’s like just to go see that! Bands, well I hate to be really crass and say the Beatles but for Christ’s sake if I could see any of their live shows, even though they weren’t known as a great live act near the end. At the same time I would love the see Bad Brains again, they were huge for me. Last time I saw them was when Tommy was still drumming for them! I had a sister that was 8 years older than me so I was like 11 or 12 seeing bands I shouldn’t! I saw the Ramones like 8 times!

TIBS- Who was your first concert?

SN- -rolls eyes- Beach Boys, I was dragged by my sister, it sucked! It was so awful, I was like 10 I had no interest in any of it and (the girls) were like screaming!

SN- I love the Damned, they were so good even with only two original members, I was so impressed.  The same time I’d say the Buzzcocks, I went in assuming they would suck and I would just get one or two good songs but that old man was blasting through those punk rocks songs! I was so impressed again!

TIBS- Music is a big thing for me, so it’s fun hearing artists talk about their interests!

SN- Me too! (Monica and I) both grew up in DC and she still does music, she used to sing in a bunch of punk rock bands and she was the first punk rock girl I ever saw. We knew each other when we were 19, but then we remet at a party in the Valley in LA 26 years later! We’ve only been together 2 or 3 years but we’ve known each other for a while!

TIBS- My last question for you would be, do you miss Austin?

SN- Not one bit! The worst year I ever had. I basically followed a friend, I didn’t want to live there. I was allergic to everything, I was sick the entire 10 months we were there, we lost our house to the flood and my cat died so it was one thing after another. I just went back because Bernie (Wrightson) had a stroke, he’s ok, but I went back and I still hate it! The humanity alone is too much. The move was a good thing.

TIBS- Well thank you very much for your time it was great talking with you!

SN- Thank you and you too!