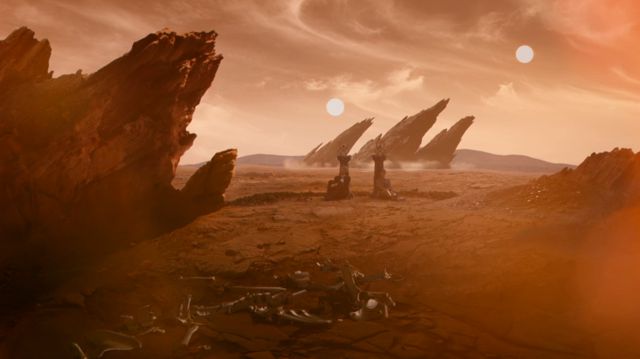 Okay, I went a little nuts tonight with the quotes.  No, even nuttier than usual, I’m afraid.  In my defense, this episode was extra packed with snappy one-liners, witty banter, and more than a few touching moments.  Since there’s enough of that to follow, I’m going to just shut up now and let you get on with the quotes.

(Check out Doctor Who on Three If By Space for all our coverage.)

Clara:  We’ll starve to death out here.
Doctor:  Of course we won’t starve, the sand piranhas will get us long before that.

Doctor:  Clara, you look lovely today.  Have you had a wash?
Clara:  Why are you being nice?
Doctor:  Because it works.

Doctor:  So, if anybody needs me just, you know, give me a shout.  I’ll be in the storeroom just getting the lie of the land.  Yes, nobody’s taking any notice at all.  Absolutely good news because it means I must be coming across just as an absolutely boring human being like you.  Deep cover, deep cover.

Danny:  Do you know him?
Clara:  Know who?
Danny:  The caretaker, Smith; the Doctor.
Clara:  Never seen him before in my life.
Danny:  A bit tense looking.  Did you see those eyebrows?

Doctor:  So you recognized me, then?
Clara:  You’re wearing a different coat!
Doctor:  You saw straight through that.

Clara:  Where’s Atif?  What have you done with him?
Doctor:  He’s fine; hypnotized.  He thinks he’s got the flu.  Also a flying car and three wives.  Gonna be a rude awakening.

Doctor:  It’s assembly, you better get going.  Go and worship something.

Clara:  Doctor.  Is there an alien in this school?
Doctor:  Yes, me.  Now go.  The walls need sponging and there’s a sinister puddle.

Clara:  You can’t do this.  You cannot pass yourself off as a real person among actual people.
Doctor:  I lived among otters once for a month.  Well, I sulked.  River and I, we had this big fight …
Clara:  Human beings are not otters!
Doctor:  Exactly.  It’ll be even easier.

Clara:  Okay, one question … and you will answer this question.  Are the kids safe?
Doctor:  No.  Nobody is safe, but soon the answer will be “Yes, everybody is safe” if you let me get on now.

Doctor:  Go and sing with the orphans.
Clara:  I hate you.
Doctor:  That’s fine, it’s a perfectly normal reaction.

Clara:  Can I help you, Mister Smith?
Doctor:  Wrong.
Clara:  I’m sorry?
Doctor:  On the board – wrong.  Wrong.
Clara:  Oh, no no no no.  No, you don’t do this.  You are the caretaker, this is not what you do.
Doctor:  Just taking care.
Clara:  Not your area!
Doctor:  Jane Austen wrote “Pride and Prejudice” in 1796 …
Clara:  Uh, this is Mister Smith, the temporary caretaker and he gets a bit confused.
Doctor:  … not in 1797, because she didn’t have the time.  She was so busy doing …
Clara:  Well what?  And I suppose what, she was your bezzy-mate was she?  And you went on holidays together and then you got kidnaped by Bogons from space and then you all formed a band and met Buddy Holly.
Docor:  No, I read the book.  There’s a bio at the back.

<bell rings>
Clara:  Right, that’s it.  Uh, well done, Kelvin.  Get going, see you all in a couple of days.  Thank you very much.
Kelvin:  Miss, what about our homework?
Clara:  You asked for homework … Amateur.

Courtney:  Ozzie loves the Squaddie.
Clara:  What was that?
Courtney:  Nothing.

Clara:  So, Pink.  The name remind you of anything?
Doctor:  Yeah, the color.
Clara:  Colonel Orson Pink, the guy we met at the end of the universe.
Doctor:  Oh yeah, okay.  Yeah, same name.  Doesn’t look anything like him, though.
Clara:  Looks very like him?
Doctor:  Does he?  I don’t know.  Who remembers a PE teacher?

Doctor:  So, is he here, then?
Clara:  Is who here?
Doctor:  The one that you keep going on serious dates with.
Clara:  If he is are you going to start talking like a normal human being?
Doctor:  I promise I won’t.  I’m being nice.

Courtney:  What’s that box?
Doctor:  The caretaker’s box.  Every caretaker has their own box.
Courtney:  It says “Police.”
Doctor:  Exactly.  There’s a policeman in there … in case of emergencies and children.

Courtney:  What was that green glow?  There was a green glow coming from in there.  What was it?
Doctor:  Of course there was.  What’s a policeman without a death ray?

Doctor:   Oh listen, there’s the bell.  Off you go.  Haven’t you got shoplifting to go to?
Courtney:  I’m going to tell the headmaster.
Doctor:  Oh yes, fine.  Well carry along, you’re running out of time.
Courtney:  For what?
Doctor:  Everything.  Human beings have incredibly short life spans.  Frankly, you should all be in a permanent state of panic.  Tick-tock, tick-tock.

Courtney:  You’re weird.
Doctor:  Yes, I am.  What about you?
Courtney:  I’m a disruptive influence.
Doctor:  Good to meet you.
Courtney:  And you.
Doctor:  Now get lost.

Courtney:  Hello, Miss.  Love to the Squaddie.
Clara:  Sorry, what did you say?

Doctor:  Now I imagine you have many questions.  Fire away, I won’t answer any of them.

Clara:  What’s that?
Doctor:  It’s a scanner.  I’m scanning.  Why do I keep you around?
Clara:  Because the alternative would be developing a conscience of your own.

Doctor:  I used to have a teacher exactly like you.
Clara:  Well, you still do.  Pay attention.

Doctor:  A Skovox Blitzer.  One of the deadliest killing machines ever created.  Probably homed in here because of Artron emissions.  You’ve had enough of them in this area over the years.  There’s enough explosive in its armory to take out  the whole planet.
Clara:  Then leave it alone.
Doctor:  Sooner or later it will creep from its hidey hole and some military idiot will try to attack it.  The world is full of PE teachers.

Clara:  So, your insanely dangerous plan is?  A new watch?  Tiny bit disappointed.
Doctor:  This is a very special watch. <puts it on, turns invisible>
Clara:  Oi, ow!  Did you just flick my nose?  You’re invisible!  Haha, oh my God that’s incredible!
Doctor:  Correct.  I am invisible and I’m incredible.

Doctor:  I’ve set up a circle of time mines around the school.  Chronodyne generators.  A bit unstable.  I switch them on, the Blitzer gets sucked through the big old time vortex, billions of years into the future.  It’s dead easy, tiny bit boring.  I’ll need a book and a sandwich.

Doctor:  I’ll see you tomorrow, we’ll go somewhere nice.  Ancient Egypt.  Crocodilopolis.  They worship a big crocodile there, so the name is a useful coincidence.

Clara:  Ah, Mister … Mister Pink.
Danny:  Are you still on for tonight?  ‘Cause you had your “I’m about to cancel” frown on.
Clara:  There’s a specific frown?

Clara:  Canoodling cancelled if you need a hand.  Doctor?  Are you invisible?  I am so gonna confiscate that watch.

Doctor:  What’s this?  A chronodyne generator?  I’ll just deactivate that, shall I?  I’ve got a swimming certificate so that qualifies me to meddle with higher technology.  Never mind that some people are actually trying to save the planet.  Oh no, there’s only room in my head for cross-country and the off-side rule.

Doctor:  The vortex will open here again, but not in a billion years.
Clara:  Then when?
Doctor:  Er, 74 hours.  Three days.  Three days to think of something new because now it knows what to expect.  Now it has scanned me and it will kill me on sight, thanks to PE here.

Danny:  How stupid do you think I am?
Doctor:  I’m willing to put a number on it.

Danny:  And he’s not the caretaker.  He’s … your dad.  Your space dad.
Doctor:  Oh, genius.  That is really, really brilliant reasoning.  How can you think that I’m her dad when we both look exactly the same age.
Clara:  We do not look the same age.
Doctor:  I was being kind.

Doctor:  Why would you say that?  Is this part of the surprise play?
Clara:  There is no surprise play.
Doctor:  Oh, it’s a rollercoaster with you tonight, isn’t it?
Danny:  And what about that thing, did you bring it here?
Doctor:  No, I’m going to protect you from that thing.
Danny:  You said it was coming back.
Doctor:  Yes, it is coming back, thanks to you.

Doctor:  And when this is all over you can finish the job.
Clara:  How do you mean.
Doctor:   Well, you’ve explained me to him.  You haven’t explained him to me.

Danny:  So … there’s an alien who used to look like Adrian.  Then he turned into a Scottish caretaker and every now and then when I’m not looking you elope with him.

Danny:  Why do you do it?  Why do you fly off in the box with him?  The truth, please, just this once.
Clara:  Because it’s amazing.  Because I see wonders.

Danny:  It’s funny.  You only really know what someone thinks of you when you know what lies they’ve told you.  You say you’ve seen wonders; you’ve seen amazing things and you’ve kept them from me.  So, what do you think of me, Clara?

Danny:  An invisibility watch?  Not even a ring?

Doctor:  Afternoon.  Thanks for keeping out of my way.  You haven’t brought Dave with you, I hope?

Doctor:  If you want to bother someone, go and bother  PE.
Clara:  He’s a maths teacher.
Doctor:  That’s a shame, I like maths.

Doctor:  It’s a time machine.  We can get back straight away like we always do on your dates.  Just make sure you don’t get yourself a tan or anything, or lose a limb.
Clara:  I don’t think we should, not this time.
Doctor:  You’ve never said no before, not even in the middle of dinner.  Remember when you had to eat two meals in a row?

Doctor:  You want to know what’s in that box?  I’ll tell you what’s in that box.   It’s a time machine!  It also travels in space.  And it usually contains a man who just wants to get on with his work of preventing the end of the world, but keeps being interrupted by boring little humans.

Courtney:  Cool!  So that’s really a spaceship?
Doctor:  I’m serious.  I’m trying to save this planet.
Courtney:  End of the world for me tonight whatever you do.  Parents’ evening.

Doctor:  Is your name really Disruptive Influence?
Courtney:  Courtney Woods.  Can I go in space?
Doctor:  I’ll let you know.  I may have a vacancy, but not right now.

Mrs. Woods:  Looks like our Courtney was right about those two.

Danny:  You’re using her like a decoy?
Doctor:  No, not like a decoy.  AS a decoy.  Don’t they teach you anything at stupid school?

Danny:  Well, is there anything I can do?
Doctor:  Yes, yes.  And this is very, very important.  Leave us alone!

Doctor:  Ah, yes.  There has been a spillage.

Danny:  I know men like him.  I’ve served under them.  They push you and make you stronger till you’re doing things you never thought you could.  I saw you tonight, you did exactly what he told you.  You weren’t even scared … and you should have been.

Danny:  If you break that promise, Clara, we’re finished.
Clara:  Don’t say that.
Danny:  I am saying it because if you don’t tell me the truth I can’t help you, and I could never stand not being able to help you.

Tune in to BBC America for Doctor Who 807 “Kill the Moon” airing Saturday, October 4 at 9/8c