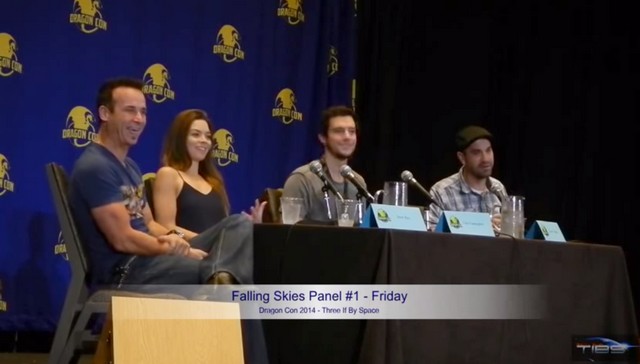 Okay, it’s finally here. The first Falling Skies panel from Dragon Con 2014 may have arrived out of order, but now you can watch it in its entirety. Colin Cunningham and Drew Roy were scheduled to be on the panel moderated by Aaron Sagers, but initially only Colin came out. He leaked that Drew Roy needed a last-minute potty break, but Drew showed up shortly. A little later, we were surprised by the unscheduled appearance of Scarlett Byrne and the panel was in full swing!

When you’re done with panel number one, swing on over to Dragon Con 2014: Falling Skies Panel #2 – Origin Stories, Death & Anthony’s Future for more.

(3:05) Colin’s Hairy Story: For the first 2 seasons, Colin says he used his own wig on the show. It was the same wig he wore to the audition. The producers finally decided to get one custom made for his character at a cost of $7,000! That’s some serious hair.

(6:05) Pilfered Props: Colin was wearing Pope’s necklace from season one. He says he never takes it off. Drew was fascinated by the Styrofoam used as a prop for concrete and rock debris, so he took a tiny piece.

(9:20) What Do You Want on Your Tombstone: A fan asked what the guys would like for an epitaph should their characters die. Colin had two answers. 1) “I’ll be right back.” Or 2) “Don’t look behind you.” Drew said Hal’s would say, “Ben, keep your hands off!”

(19:28) The Scarlett Surprise: Drew and Colin are joined by surprise guest Scarlett Byrne. Her accent momentarily surprised Colin because he said she only uses her American accent when on set so he’s not used to hearing her actual English one. Scarlett said joining a show with an established cast was a lot like starting out at a new school, but she got along with everyone just fine.

(21:30) Practical Jokes Are Just Impractical: When asked if they pull any practical jokes on the set, they said their filming pace was just too hectic to really have time for practical jokes. Drew said that Noah fills in the gap by telling them stories of all the stunts they pulled when he was on ER.

(25:42) Spielberg, Hannah Montana, & Squealing: In answer to a question about Steven Spielberg, Drew had a funny story about the time he first met the man during the shooting of the pilot. They ended up talking about Hannah Montana and the piercing sound of fans screaming at her concerts.

(36:05) Choose Your Weapon: The panelists were asked which weapon was their favorite to use on the show. Colin said that the original revolver Pope had in season one was his favorite; not because it was practical, but because it was cool and he felt it fit his character. Drew originally picked an M4 assault rifle, but then he noticed it was a pretty common choice for not just the background people on Falling Skies, but on many other shows as well. So now he uses an Israeli-made Micro Galil which he named Zelda. Scarlett’s character, Lexi, obviously doesn’t need a gun, but she’d like to have one anyway.

(42:45) These Are A Few of My Favorite Things: A fan asked what their favorite moments from the show might be. Drew said his favorite parts are the action sequences. Whether it’s shooting a gun or running from an alien menace that’s not really there during filming, he lives for the action. Scarlett said her favorite scene has yet to happen. Remember, this panel was held two days before the finale aired so she couldn’t say much more. Colin said his favorite moment was when Pope first appeared in the second episode of season one. He loved the extended dialogue between Pope and Tom Mason.

(49:48) I’m Having An Episode: Fielding the question, “What’s your favorite episode?” Scarlett began by saying hers was the episode where she emerged from the cocoon. Drew said it was freezing cold on that day when she was covered with goo and had hardly anything on. Colin said his favorite episodes have been the ones this season where Hal has been given more to do as a leader. Drew’s answer was an episode many fans can probably agree with. He said his favorite one was when Tom and Pope were stranded in the woods after the plane crash.