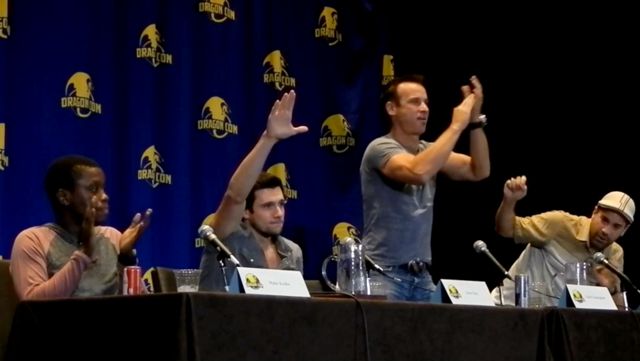 The second day of Dragon Con was in full swing when the second Falling Skies panel opened its doors to a packed house. Host Aaron Sagers greeted Colin Cunningham and Drew Roy for the opening of the panel. Running late, but never one to disappoint fans, was Mpho Koaho who rounded out Saturday’s panel.

And when I say Mpho is never one to disappoint fans, just take a look at what he does when he arrives (about the 18 minute mark). He’s looking out into the audience of fans and actually taking the time to recognize individual people. He’s waving and pointing at what appears to be half the room. This is a guy who really loves his fans.

(1:45) Dragon Con Is By Fans, For Fans: Colin explains that the thing he loves about Dragon Con is it’s so fan-centric. There is a lot more fan interaction here than other conventions and he likes it.

Like most celebrity panels at Dragon Con, this panel centered primarily around fan questions, which always end up in strange, but fun directions. Heck, you’re a fan getting a chance to ask your favorite actors from your favorite show any question you want; go for it. Have fun with it!

(9:40) It Pays To Be Different: After a fan asks Colin about his character of Pope he talks about how he approaches auditions. He decided he’d look at a role and decide how everyone would approach it and then decide to do it differently. He said once he started doing that he began to get jobs.

Drew said that sometimes not getting a part doesn’t come down to you having the best audition. He said sometimes they’re just looking for someone with a different appearance and no matter how good you were in the audition you don’t fit the part in other ways. Colin said he’s experienced the same thing and that fitting the visual appearance casting directors have in mind is crucial to getting a part.

(14:30)Trust Me, I’m An Alien: Another fan asked how they deal with issues of trust with not only aliens on different sides of the conflict, but also some humans working, unwillingly, for the aliens. Colin said Pope basically didn’t trust anything with more than two legs, or anything, really, for that matter. No surprise there. Drew finished with a funny comment about how he used to trust Maggie and Ben.

(21:50) Everybody Loves A Good Origin Story: A young fan asked how the guys became actors. Mpho was in the Big Brothers organization when he was about 13 and the lady running it got him into an after school drama program. The teacher took him to an agent who signed him and he’s still with the same agent after 17 years.

Drew signed up for a talent search in the Marriott in Atlanta, which is one of Dragon Con’s host hotels. He had never performed in his entire life and was put in front of 5,000 people and afterwards he was offered representation out in Los Angeles. It took him over five years, but he finally began getting parts.

Colin has always had an overpowering urge to succeed and got a one line part on General Hospital as his first acting gig. He worked at a grocery store while he pursued acting and that he’s grateful to be where he is today.

(29:10) If At First You Don’t Succeed: The guys talk about how important failure is to success. Mpho said that if he were simply given fame he wouldn’t appreciate it while having to struggle to get work has made him truly cherish what he has. Drew said he once got a job in Louisiana, took 6 weeks off his job as a valet, flew all the way down and then got a call telling him he wasn’t needed. It turned out the guy they wanted first became available at the last minute so Drew was halfway across the country and out of a job. Colin said that acting is something you live, not something you just try out for a few years. He said you’ve just got to enjoy it whether you make money or not.

(38:15) I Could Die At Any Minute: They all discuss the fact that the show isn’t afraid to kill off main characters. Mpho says he feels the most like the one who could die at any time and fans agree. And they brought up the death of Peter Shinkoda’s character of Dai. Supposedly he wasn’t going to die in the first draft of the script, but revisions ended up killing him. Based off of his movie experiences where his characters almost always die, Mpho is basically the black Sean Bean.

(46:30) Peter Shinkoda Dives for a Line: Drew tells a funny story about Peter Shinkoda and a scene at a very steep drop-off. Director Greg Beeman asked Peter to jump down the drop-off and slide down the incline. Peter has some hesitations because it’s a very steep drop, but Beeman says he’ll give him a line when he gets to the bottom. So Shinkoda pulls out a cigarette, lights it up, looks over the edge and says, “I get a line? Alright, let’s do this.”

(52:30) Anthony’s Future & Getting Laid: Mpho teases that his character will have something major going on in the fifth and final season. He also said he gets asked by fans when Anthony is going to get laid and he jokingly said he felt an obligation to fans to make that happen.

(55:20) We May Have To Rob Colin: When the guys are discussing how hot it was filming season one in Toronto, Colin jokingly said it’s exactly like Dragon Con only getting paid $300,000 a week. Mpho gleefully invited us to rob Colin with him.