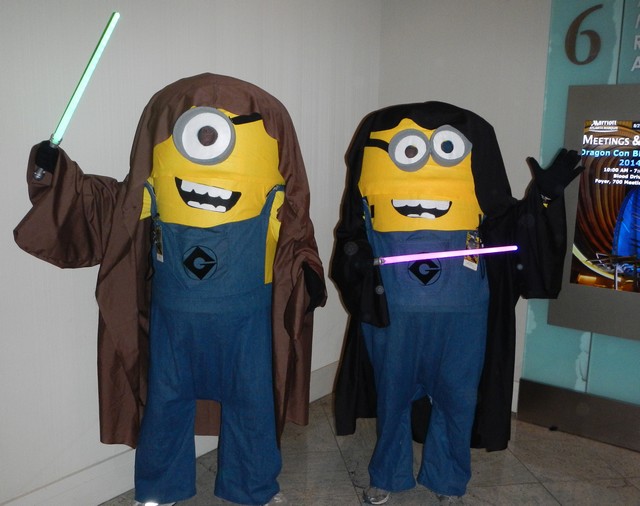 Another successful Dragon Con has come and gone, but the fond memories remain. This year saw record attendance and as always there were countless cosplayers, which has become something of a trademark for the fan-centric convention. The costumes range in detail from your standard off-the-shelf Halloween costume to intricate outfits worthy of a movie set. Heck, some of these people should be hired by the studios to do work.

Although the complexity of costumed crusaders varied greatly, one thing remained constant – their love of genre entertainment. And that love was pervasive. Everyone, whether in street clothes or superhero tights, was a superfan. You don’t scramble for hotel rooms, airline flights, and tickets to a convention like Dragon Con unless you really love yourself some scifi, fantasy, comics, or anything else that falls under the genre umbrella.

It’s not something you casually approach, but instead plan for far in advance. If you’ve been you probably started planning for Dragon Con 2015 on your way home from Dragon Con 2014. If you haven’t you need to start because you really don’t want to miss one of the most fun conventions on this planet with a party atmosphere unlike anything else. It truly is unique in that regard.

Another hallmark of Dragon Con is the friendly atmosphere. You might think that packing tens of thousands of people shoulder-to-shoulder into a handful of hotels would create tension, but the feeling is anything but tense. It’s a friendly crowd, a real nerd family, and you find yourself striking up a conversation with just about anyone around you. I’ve made some great friends just waiting in line for a panel or a bite to eat.

At its heart, Dragon Con is about complete acceptance of everyone and celebrating diversity, but it goes even further. It welcomes that diversity, gives it a big, old bear hug, and then literally puts it on parade. Yes, the Dragon Con parade has got to be the largest, geekiest, and coolest parade in this arm of the Milky Way galaxy. This is the perfect place to join in and let your nerd flag fly proudly while you’re cheered on by streets packed with fellow geeks who love you, support you, and want a picture of you.

This year saw a lot of cross-play. Mash-ups of different franchises and genres are some of my favorites because it not only shows a love for the material, but also just how imaginative some fans can be when given enough time, paint, glue, felt, fuzz, copper, chrome, plastic, fabric, LEDs, dye, glitter, wigs, and sweat.

Among the sights I came across this year some of my favorites were Muppet crossovers, a few of which you’ll see in the gallery. I was raised on Muppets from way back in the days of the long-defunct Ed Sullivan Show and have been a fan of Jim Henson and the works he’s inspired ever since. It’s no surprise there were a lot of Guardians of the Galaxy costumes running about considering the wild success of the film.

It warmed my heart to see a few throwbacks to franchises from years past. Running into Max Headroom was something I was definitely not expecting, though it’s never surprising to run into anything at Dragon Con. There was a young man, whose picture you’ll see in the gallery, who had a fun get-up that paid homage to Jaws, and a couple who represented for John Carpenter’s fabulous film They Live.

Man, I’m telling you, Dragon Con has a greater selection of colorful characters than the Mos Eisley Cantina. Don’t believe me? Get your badge for 2015 and find out for yourself. You’ll thank me for it.

[Special thanks to Robert and Hannah for contributing pictures to the gallery!]