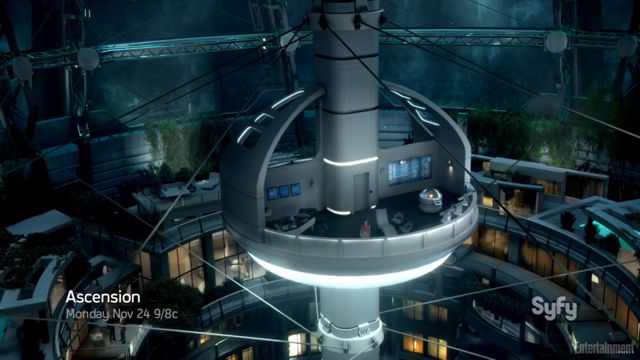 Entertainment Weekly just released an exclusive first trailer for Syfy’s upcoming event series Ascension and it looks amazing.  The clothes and the ship give the show a nice retro-futuristic look that just seems perfect for the 1960s when it was launched.  The drama and action hinted at in the trailer really add to my eagerness to see this show.

The tagline in the trailer says, “They were given a mission to save humanity, but who will save them?”  Since this is a drama about a murder, social class warfare, power struggles, and who knows what else I’d venture to guess they need to be saved from themselves.  Heck, no matter how big, 50 years aboard the same spaceship has got to make people tense.

Ascension is also going to be an interesting study in how a microcosm of society evolves after being isolated from the rest of humanity for a half-century.  Watching the similarities and differences is going to be fun, especially with what will certainly be a pervasive sense of the ’60s running throughout the show.  Just look at some of the clothes and hairstyles and you’ll see a lot of things stagnated when they left Earth.  What kind of people they’ve all become will be the most interesting part of it all.

Now, let’s all cross our fingers that it gets picked up for a full, recurring series.

For more about Ascension click on the links below for our interviews from San Diego Comic Con and how the science of the 60s really could’ve made this happen: