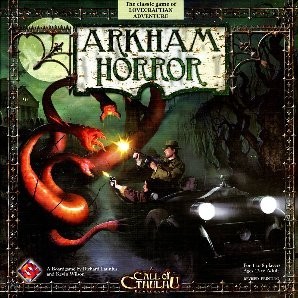 Happy Halloween, everyone! Welcome to the newest enstallment of board game reviews.

This week’s game is Arkham Horror, the run and fight for your life while trying to stay sane excursion! 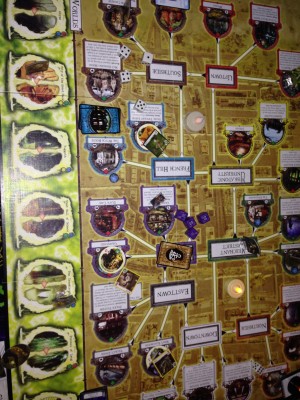 The year is 1926, and it is the height of the Roaring Twenties. Flappers dance till dawn in smoke-filled speakeasies drinking alcohol supplied by rum runners and the mob. It’s a celebration to end all celebrations in the aftermath of the war to end all wars.

Yet a dark shadow grows in the city of Arkham. Alien entities known as Ancient Ones lurk in the emptiness beyond space and time, writhing at the gates between worlds. These gates have begun to open and must be closed before the Ancient Ones make our world their ruined domination. Only a handful of investigators stand against the Arkham Horror. Will they Prevail?

So what does all this mean for gameplay? Arkham Horror is a (long) cooperative survival game themed around H.P Lovecraft’s Cthulhu Mythos. Basically, you wander around Arkham and try to kill horrific monsters and avoid going crazy due to Lovecraftian things jumping out at you and messing with your mind. You choose from sixteen investigators based on their roles and helpfulness to the entire party before taking to the streets of Arkham. Before the game, one of the eight Ancient Ones is chosen and it’s up to the players to prevent it from breaking into our world. Most of the game is spent dealing with random encounters are locations around town. Your goal is to close portals to other dimensions that are spawning in different sectors of Arkham. If too many portals open, the Ancient One awakens and the players only have one last chance to save the world by defeating it in all-out combat.

After that, most of game is determined by chance encounters at locations you choose. 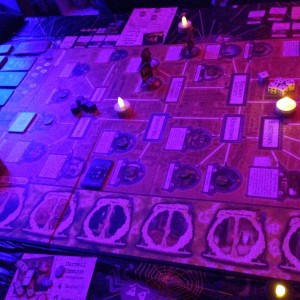 The other gurus and I had some spooky fun with this one by playing IN THE DARK! Lit by only tea lights and dimmed overhead bulbs, the whole game was cast in a gloomy hue. In the spirit of Halloween, creepy piano music and storm ambience sounds played in the background. As the game began, I became Gloria Goldberg, the author, who is best equipped for Otherworld encounters. Too bad I never had one of those!

Our big bad was Yig, a giant salamander-looking thing with a lion’s mane of what I can only assume is hellfire. Yig doesn’t look too threatening at first—until you realize that every cultist in the game is one of his lizard minions. So any time you kill a cultist (which happens often), Yig gets that much closer to being woken. Needless to say, we had to tread lightly. 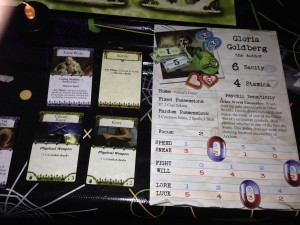 One of the big highlights of our game was that two players had a chance encounter with an actual Ancient One (different than Yig, our primary monster)! And both investigators (neither of them me, sadly) managed to survive their encounters. That was a first for all of us. In the end, we managed to defeat the baddie before he destroyed Arkham and the world.

Verdict: I give Arkham 9 out of 10 horrors. Why? Because although it’s an intricate game with a lot of replay-ability (each spot in the city has many, many different encounter scenarios), it’s also a long and complicated game. But it’s a great choice for those who enjoy cooperative games that can change course over a span of many turns, and can often go from good to bad in a matter of one round.

Have you ever played Arkham Horror? What did you think of it? Share your experiences in the comments.