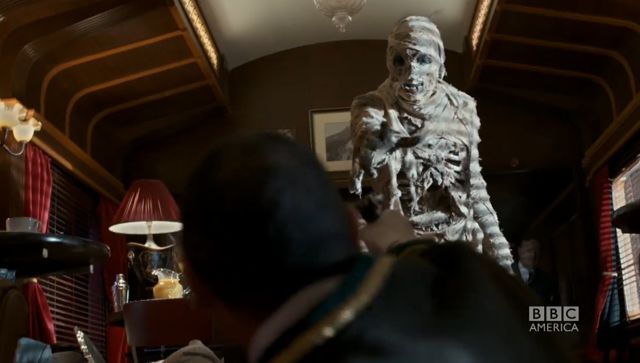 Okay, I lied.  I’m gonna say it.  You know you’ve already said it in your head and maybe to the person next to you, so I’m not exactly breaking new ground.  Yes, let’s all say it together.

There, I feel much better now, don’t you?  Has anybody seen my gas mask?  Wait … wrong episode and wrong mummy.

This Orient Express isn’t Earth-bound, though it may be bound for Earth.  To tell the truth I have no idea where the train is going, but for a space train it has a very anachronistic interior.  Even the passengers look like something out of Earth’s past.  But who the hell brings a mummy on a space train?  That’s just asking for trouble.

This week, the Doctor (PETER CAPALDI) and Clara (JENNA COLEMAN) are on the most beautiful train in history, speeding among the stars of the future. But a deadly creature is stalking the passengers.

Once you see the horrifying Mummy, you only have 66 seconds to live. No exceptions, no reprieve.

As the Doctor races against the clock Clara sees him at his deadliest and most ruthless. Will he work out how to defeat the Mummy? Start the clock!

Tune in to BBC America for Doctor Who 808 “Mummy on the Orient Express” airing Saturday, October 11 at 9/8c