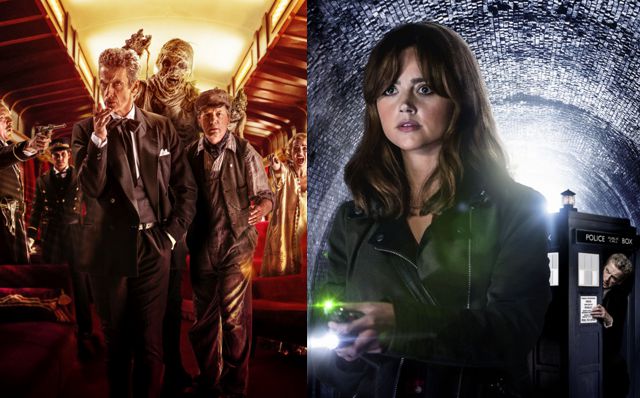 On Sunday, October 19, the writer of recent Doctor Who episodes, Mummy on the Orient Express and Flatline, Jamie Mathieson, held a live Twitter Q&A session.  Mathieson, a former stand-up comedian, is now a film/television writer.  Besides the two episodes of Doctor Who, he’s written for the original Being Human and Dirk Gently. 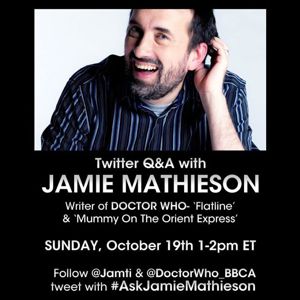 This is Tom and I’ve hijacked Erin‘s post, with her permission, of course.  Because of prior commitments, I was unable to be a part of the Q&A session.  Like a true friend, Erin took it upon herself to help me out by transcribing the session into a nice, neat package for me.  Okay, actually for you.  I’m just riding coattails here – it’s kinda fun.  The point is, none of this would’ve been possible without Erin’s generous efforts.

With the flurry of conversation, some questions eluded us, but it didn’t matter.  The answers are pretty self-explanatory and interesting enough to be included sans Q.  No, not the dude from ST:TNG.

Q What were some of the ideas you pitched that didn’t get used?
A They were SOO cool. I can’t believe Steven didn’t want them. I’m sure that one day he’ll come to his senses. The first one was-

A  I’ve been stumped with certain plot points that I can’t make work. But never a lack of ideas. I think we can all pour out ideas if we just turn off our internal editor. The little voice that says ‘That’s a terrible idea. You can’t write.’ Turn that voice off and we can all come up with a massive list of derivative terrible tosh. So if I’m stumped, I start writing terrible bad ideas until the good ones come. And then never show anyone the bad ones. Ever.

A Write a lot. Start a script, finish it. Start another one. FInish it. Banish the idea of the ‘overnight success’ from your mind. It’s not a healthy idea and will only make you feel like a failure when it doesn’t happen. View learning to write as if you are learning to play the guitar. You need a lot of practice before you are even a competent player, let alone a virtuoso. Read scripts. There are a few archives on the net. Take any job, however small. My first writing gigs were writing on Family Fortunes (Family Feuds) and Catchphrase. Good luck.

Q Did Danny really say “What up bitch?” to Clara when she picked up his call? Or was that bad closed captioning?
A Bad Cc. The actual line was “I got our bench.”

Q Flatline is very reminiscent of Classic Who – was this something premeditated?
A Fraid not. Don’t know enough old Who to really know. Talk about it here.

Q Was the Doctor’s victory dance in Flatline scripted and if so how did you describe it in the script?
A Exactly as that. The rest is all Capaldi.

Q After you come up with a basic idea, what’s the hardest part about writing an episode?
A Getting Steven to say yes.

Q Was it easier to write episodes that were consecutive to get the relationship with The Doctor and Clara right?
A It made it a little harder as I was writing them in the wrong order – and also the fallout from Kill the Moon was a shock.

Q What was the most difficult part of writing Flatline?
A Flatline went through a few versions. In the first, I started the adventure with Rigsy and the Cleaners running from the Boneless and colliding with the Doctor and Clara who were already mid adventure. The Doctor had already built the Twodis, etc. Then I got the directive that as 12 was a new Doctor, we wanted to see the style he had as he investigated the case from the beginning, so draft two added a whole new chunk on the beginning and shrunk the rest. Then I was told this was a Doctor light ep, so the idea of the tiny Tardis was added. We also found out from Steven the new character for 12. Now THAT was a rewrite… I talk about it more here.

Q No spoilers please, but while writing Flatline were you aware of who Missy is?
A Yes. I have read every script of the season. I read the two parter finale on my phone sitting on a beach on hols. It rocks.

Q How long does it take to write a whole script for an episode?
A You usually get four weeks for a first draft. Every draft after that, much less unless it’s a really big rewrite: 3 weeks.

Q Who is your favourite monster from classic series?
A Daleks. Gotta be. Original and best.

Q Who got to keep the TARDIS props, both 1/2 sized and toy sized?
A Don’t know. But I love the fact that the “siege mode” Tardis is now officially what the Tardis can look like.

Q Who has been your favorite actor/actress to work with?
A Writers don’t tend to work with the actors really. We say hello at read-throughs and then get rushes. But Peter Capaldi.

Q Do all writers meet to talk about the season in general before going off to write your own respective episodes?
A No. It’s more like Steven meets us all separately in Cardiff. We do occasionally bump into each other though.

Q Who is your favorite doctor?
A Cushing. No, I kid. Capaldi. He’s MY doctor.

Q Was Flatline inspired at all by Edwin Abbott’s classic book Flatland, where a 2D person is visited by a 3D person?
A Yes.Read all about it here.

Q Did you write the Missy scene yourself or leave that to Moffatt?
A No. That was all Moffatt. He knows the arc he wants.

Q How do you feel about revisiting monsters? Would you consider a return for the Boneless?
A IF Who ask me back and IF the public are clamouring for it and IF there is a good new angle on them.

Q After seeing two episodes with Trains, can we affirm you’re a rail enthusiast?
A Total coincidence. Mummy was a Steven title, but I can see how it reads…

Q How long have you been writing? Are there any writers or authors that have inspired you?
A I was writing bad poetry at 15. I’m now 44. I’ve been a writer for a living for 8 years…

Q Any tips for being a good writer?
A Do a lot of it. It’s like any other muscle, it improves with use. Expect to be bad when you begin. It’s a marathon, not a sprint.

Q Favorite easter egg in the last two episodes?
A Rigsy is named after my best man. Nothing to do with Banksy at all. Didn’t even make the connection until I read a review. Ha.

Q Flatline is very inventive! But in an episode dealing with the TARDIS why did the Doctor never talk to her? Happened all the time with 11.
A I felt the “Tardis is alive” angle had been thoroughly plumbed in The Doctor’s Wife. Kind of fits 12’s character. Little colder.

Q How did it feel to write the script that finally gave Capaldi his “I am the Doctor” speech?”
A A version of the ‘man that stops the monsters’ speech originally occurred halfway through Flatline. He was irritated that his attempt to talk to them had failed and was basically saying ‘Okay, we’ll be enemies then.’ But the more I worked on the speech, the more I thought, ‘No, this is an end of ep speech. This is get the hell out of our galaxy speech.’ It owes a little to Sheridan throwing the Shadows out in Babylon 5..

Q Loved your scripts! Would you like to write a story based on a legendary monster, like the Daleks?
A I’d love to, but tricky to come up with a fun new angle on a classic monster. Which is why Into the Dalek was a great idea.

Q What has been your favorite part of writing for Doctor Who so far?
A Bouncing ideas off Steven’s mighty brain and watching him make them better.

Q What’s the biggest personal change you’ve ever made?
A Stopping working in Royal Mail Customer Services in 2000 to become a full-time standup comic.