Last night’s episode of Gotham had a little something for everyone . . . the viewers and the characters alike. It had an interesting blend of creepiness, campiness, and all-around fun-ness (not a word, I know, but just go with it). Plus, it was exciting to see more depth in people like Harvey Bullock and Ed Nigma, who both received a bit more attention than in previous episodes.

For Bullock, we got a nice glimpse of him as a young man, a not-so-jaded cop who actually believed in the cause to make Gotham a better place. And for Nigma, we got a glimpse of his flirting skills. This episode managed to showcase his efforts as both creepy and endearing. 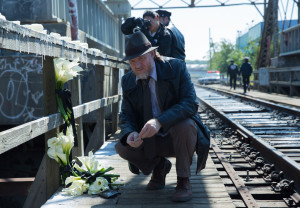 The main storyline revolved around one of Bullock’s old cases—a traumatic case he thought he’d closed ten years ago—that’s come back to haunt him. Enter the Spirit of the Goat, a copycat (or “Copy-Goat”) murderer who is killing Gotham’s richest citizens’ first-born children. Even Bullock’s old partner weighs in on the strange return of a man seemingly under supernatural influence. One thing this episode really drove home for me was a deeper understanding of Bullock’s character. He’s a cynic and a crooked cop, but he’s also institutionalized into the way Gotham works after years of dealing with a tough city. He lives by a particular code now, and that code can be summed up with his old partner’s memorable words: “Gotham’s golden rule, Harvey. No heroes.”

But let’s not forget the other main attraction: Oswald Cobblepot, aka the Penguin. He is also featured in this episode, although to a smaller degree. Penguin is reunited with his mother, who comes across brilliantly as the overbearing mother who’s relationship with her son is more than a little creepy. My favorite lines the night:

“You got tangled in some hussy’s demon purse!” – Mrs. Cobblepot 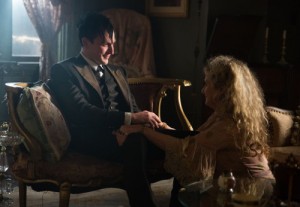 Penguin has big plans coming to a head, but they take the back seat for now.

While Harvey Bullock is experiencing the worst kind of déjà vu, Jim Gordon has his own troubles with his fiancée, Barbara. I’m having a hard time justifying Barbara’s purpose in the show, other than to give Gordon one more thing to worry about as his problems get bigger and bigger. There is barely any chemistry between Barbara and Gordon, and her presence feels more like a nag than a supportive figure for Jim. These things make it hard for me to sympathize with Barbara, let alone like her. But maybe she’ll come to serve a better purpose in later episodes? One can hope. 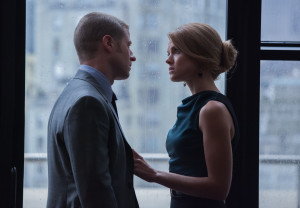 Let’s go back to Ed Nigma for a moment. I have to say that, despite the show’s excessive reminders that he will one day become the Riddler, I really enjoyed watching him and his peculiarities. Unfortunately for Nigma, his efforts to impress Kristen Kringle (great name, by the way) only make things worse. From smelling her hair to “fixing” her filing system, Ed just doesn’t know how to properly win over a lady’s heart.

The mystery of the Goat comes to a head when Bullock realizes that Dr. Marks, the hypnotherapist, has given therapy to very specific patients over the years—the original Goat and the copy-Goat. She hypnotized them and replaced their identities with that of the Spirit of the Goat. Supposedly for the good of Gotham? Now that’s messed up.

Meanwhile, Detective Montoya hasn’t given up on her mission to prove Gordon guilty of Oswald Cobblepot’s murder. She tracks down a witness who saw Gordon shoot Oswald, putting him—and Bullock—at the scene. She wastes no time swooping in to arrest them. But just as Gordon and Bullock are being taken away, good old “Penguin” Cobblepot walks in, announcing his breathtaking re-entrance. The episode ends with everyone’s shocked faces, and Bullock about to punch Gordon right in the face. Talk about a cliffhanger! Makes me wish it was next Monday already.

Overall rating: 8 out of 10. This episode was well done, and despite a few shortcomings, I continue to enjoy Gotham and its potential to ramp up more and more as the series continues. What did you think?

Catch an all-new episode of Gotham next Monday, November 3rd at 8/7c on FOX.