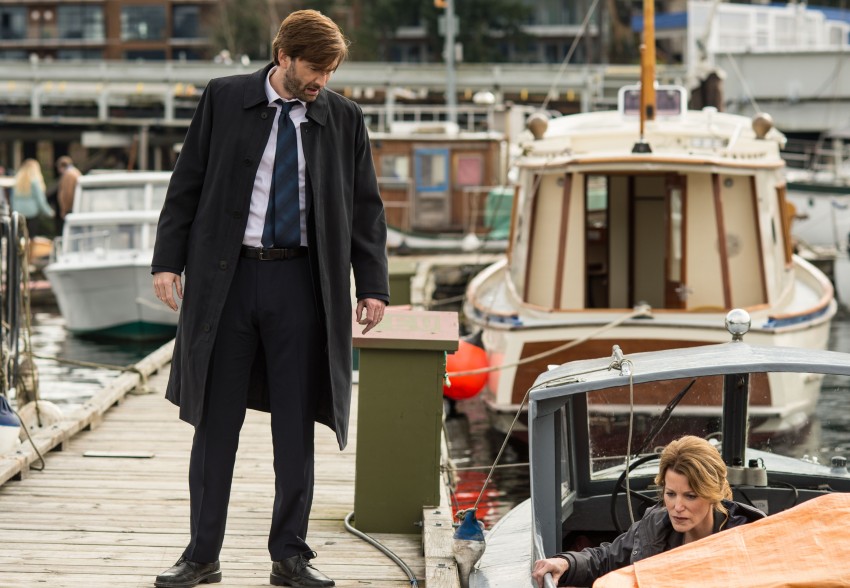 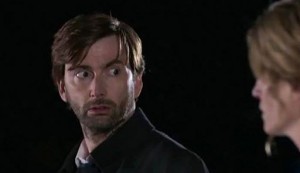 Our murder scene is confirmed as the cabin at Harvey Ridge. The cabin has Mark Solano’s finger prints as well as blood spatter. We open to a crass conversation between Carver and Miller regarding why Danny was not simply tossed from the cliff as it was a perfectly good cliff to toss a body off.   This comment gets right up Ellie’s nose and she lashes back at Carver for his abruptness.

The mystery of Carver’s past deepens as we learn a bit more about his character. His is seriously ill and in need of medical attention and rest but feels that his time in Gracepoint is penance for past actions. Renee, the reporter, reveals more of her connection to Carver in a brief conversation on the street in which she makes snarky comments about a past case where a mother is suffering without justice due to Carver’s testimony on the witness stand. This leaves us with questions of what kind of guilt Emmett is carrying with him. 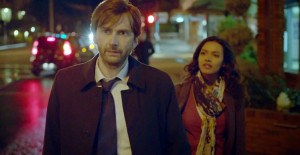 The interrogation of Danny’s father Mark Solano reveals there are holes in his story and he will not break silence on them causing Detective Carver to order his arrest for obstruction of an investigation.  And there he stews. Until he is freed based on the testimony of his lover, Gemma Fisher. 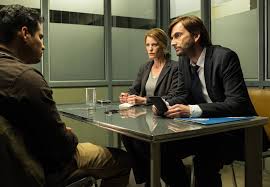 Tom Miller is interviewed by Detective Carver and we learn that Danny was hit by his father. This paints a picture that all was not well in the Solano household, however Danny is twelve and most boys do things that anger their parents so I fail to see how this is a pertinent revelation to any sort of plot line. Boys get up to all sorts of mischief that make parents understand why creatures in the wild eat their young.

Meanwhile Danny’s mother Beth Solano played by Virginia Krull, is working through her grief and mourning by doing everything normal she can do. As the viewer we should keep in mind that her grief is fresh even though there have been weeks that have passed for us. I think her reaction to the psychic Raymond is on point. We garner more than a glimpse into the relationship between Beth and the town priest, Paul Coates.

Upon discovering that Mark has been arrested Beth drags a very vociferous Chloe off to the bathroom and tells her to keep her mouth shut, that the Police are not their friend. We then cut to Chloe texting someone who can help her father and we learn that the Solano children are more savvy then the adults in town.

The tensions between Ellie and Carver deepen as Ellie’s overtures of human kindness are rebuffed by Carver. Miller tells Carver to back off, finally showing her spine when she refuses to make a late night call to Chloe Solano to demand information that might help the case.

I am watching but I am not impressed. There is some element missing that is pivotal to creating a crime drama that is successful.  I want Gracepoint to be successful, but it is getting harder to do with each passing episode.  I guess my main beef is that the writing that does not adequately represent small town America.  The cast is skilled, the direction is fine, the adaptation is not as sharp as it could be.  I am still watching, waiting to see if all the elements eventually click into place.  If there are hopes to turn this show into a multi-season franchise then the writers need to step up and craft something that grabs the viewer within the first few moments rather than the first several episodes.