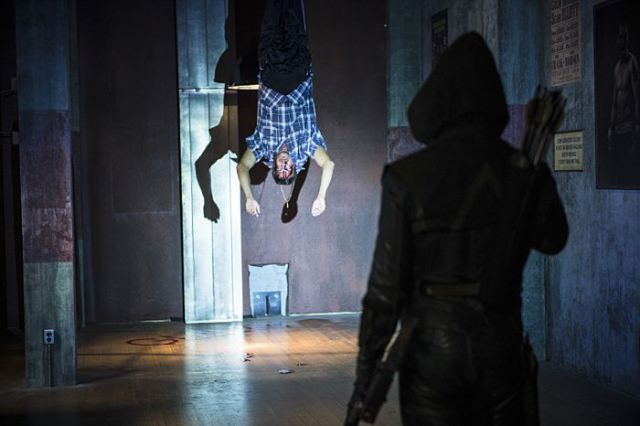 After being largely ignored this season (sure, he’s still had a few scenes, but he’s been also been demoted a lot to background scenery and extra in the choreographed fights), Roy Harper took center storyline in last night’s episode. The shocking twist at the end of Episode Five comes to a head when Roy confesses to Felicity that he’s been having dreams that feel more like memories . . . memories of killing Sara.

They run a blood test for Mirakuru, Roy fearing that any of it remaining in his system might have caused him to go into a drug-induced rampage. But he tests clean, and although this gives Roy a small amount of relief, Felicity finds damning evidence on Sara’s virtual autopsy. The rest of the episode features Roy coming to terms with whether or not he really killed Sara, and then dealing with the truth when it finally comes out. 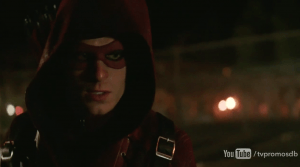 “Guilty” shines a spotlight on Roy and Oliver’s relationship, and while they did have some touching scenes, I felt there were times when the believability was lacking. Roy and Oliver’s relationship as mentor and apprentice has been established in previous episodes, but in general has been underdeveloped. So as the tug-of-war between Oliver keeping Roy around or kicking him off Team Arrow progressed, it was simply a way to connect the dots with Ted’s storyline. So let’s take a look at next.

Ted Grant, Laurel’s boxing trainer, is not who we thought he was. He is indeed a boxer, but he was also a vigilante. He donned a mask much like Oliver, but quit after a man was beaten to death with brass knuckles (spoiler warning: the murderer was Ted’s partner, Isaac Stanzler). Old buddy Isaac was to Ted what Roy is to Oliver: a vigilante sidekick. But then Ted had to turn his back on Isaac, and now it’s coming back to him like a horrible boomerang. Dead bodies start showing up at Ted’s gym, strung up like punching bags, with the word ‘GUILTY’ written beneath them. Ted eventually admits to Oliver that he knows Isaac is the one killing those people and framing him for it. 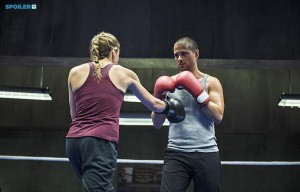 The episode parallels Ted and Isaac’s relationship to Oliver and Roy’s, and while it does a decent job tying the two storylines together, it didn’t have as much impact as I was hoping it would. By the end of the episode, Oliver is steadfast in his position to never abandon Roy, but the treatment came across a little too hokey. Touching, but hokey. And I think that’s because, as I mentioned before, their relationship is underdeveloped.

Even before Oliver learns about Ted’s past vigilantism, he warns Ted to stay away from Laurel. But Oliver’s jealousy and protectiveness towards Laurel comes across as hypocritical. It’s understandable that he cares about Laurel and wants her to be safe, but he does it like such a man-child that I found myself rolling my eyes at him. He makes a huge fuss about Ted’s violent history, but forgets about his own. In fact, Oliver’s vigilante past (especially in Season One) is much bloodier than Ted’s. But he acts like his new no-kill policy makes him better than Ted. He thinks that justifies all the effort he puts into convincing Laurel to stay away from him, but it really doesn’t.

We also got some new insight into Oliver’s time in Hong Kong during this episode. His newest target is China White’s courier, who is carrying an important envelope of information. The courier escapes, stashing the envelope someplace that Oliver saw, but doesn’t yet know that he knows (weird, right?). The other Hong Kong scenes revolve around him trying to remember, which eventually he does thanks to meditation. 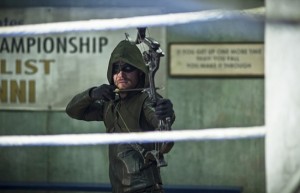 That same meditation technique is used to help Roy remember the truth of his memories. Turns out Roy didn’t kill Sara, but he did kill a police officer during one of his Mirakuru-induced states. Oliver tries to pass it off as not a big deal, but to Roy it is. He’s still a murderer, regardless of if it was Sara or not.

Oliver’s rather blasé response to the truth of Roy’s actions is understandable, but not acceptable. Neither was the scene where Roy tells Laurel that he thinks he killed Sara. The scene just wasn’t handled right, and it ended up being awkward for both the actors and the audience.

Not everything about this episode was bad, though. We still got some fun moments, one of my favorites being Oliver using a “boxing arrow” to knock Ted to the ground. Another favorite of mine was Felicity’s first scene with Roy. He asks her if she knows how to do a blood test, to which she answers, “I know just enough to be dangerous.” And even though it was silly and cheesy, I did enjoy Cupid’s entrance at the end. 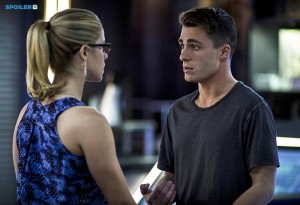 Overall, I give this episode 7 out of 10. After the brilliance of Episode Five, this episode didn’t shine. It wasn’t horrible, but it wasn’t great either. I’m certainly happy that Roy didn’t kill Sara, but between Oliver’s alpha-male posturing at Ted and the fact that the episode should have focused more on than it did, “Guilty” couldn’t quite keep it together. What did you think about this episode? Share your thoughts in the comments.