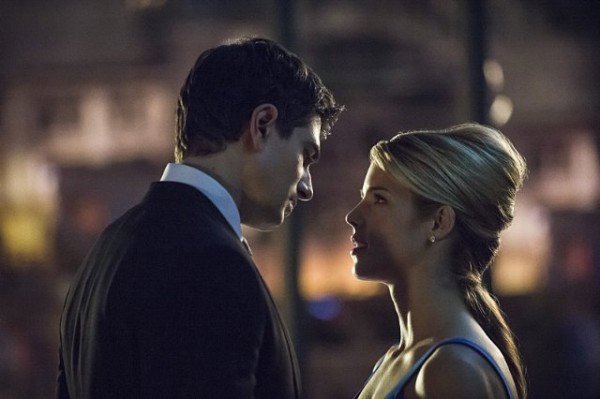 Love hurts! Love is insane! Such truth delivered to you by Arrow’s latest episode, “Draw Back Your Bow.”

Things start heating up when Oliver gets his very own copycat stalker—Carrie Cutter, AKA Cupid. In a flashback, Oliver saves Carrie from one of the Mirakuru-amped soldiers, and she thinks that his act of heroism means he loves her. In the present, Oliver is faced with the repercussions of Cupid’s crush as the dead bodies start showing up, struck with arrows tipped in spades (well, hearts, actually). She even leaves him a love note in the form of an apartment filled with candles, arrows, and news clippings about the Arrow. She insists that he will be her lover or more people will die. She’s pretty demented, but you have to admit, she’s cute about it. 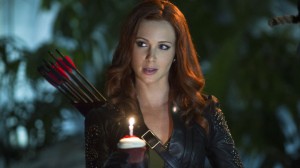 This episode bounces back and forth between Arrow x Cupid and Felicity x Ray (and Oliver’s man pain, let’s be honest). As Oliver struggles to convince Carrie that she needs to stop obsessing over him and that he will not (be her Valentine) cooperate with her demands, Felicity is dealing with her new role as VP of Palmer Technologies. But where Oliver is complaining about his crazy stalker, Felicity isn’t complaining about all the attention Ray is showering her with.

The first scene with Ray and Felicity is arguably my favorite of this episode. She walks in and sees him on his own salmon ladder (“Oh, God, I have a type.”) and is thoroughly distracted/unable to concentrate in the presence of shirtless Ray. He then bribes her with a very expensive, Couture dress and invites her to a “platonic dinner.” 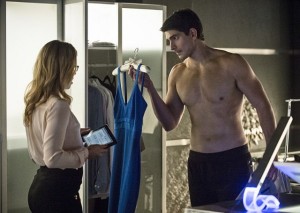 Which of course leads to Oliver’s man pain. Felicity wants the night off so she can go to dinner with Ray. Oliver begrudgingly agrees to it, but he’s obviously upset and everyone notices (especially Diggle). Diggle tries to reason with both Oliver and Felicity throughout the whole episode, encouraging them both to just accept that they are the “endgame” couple. But to no avail.

In flashbacks, we’re given a bit more insight to Oliver’s time in Hong Kong. But instead of focusing mostly on one of Oliver’s missions for Waller, this episode was more about showing the dynamics of Oliver living (or bumming it up and not doing his chores, as some see it) with Maseo and his family. This is certainly a smaller part of the episode, but still important.

The same can’t really be said for Thea and Verdant’s role in this episode, though. She’s given a somewhat throwaway plotline of meeting a bad boy DJ/possible love interest, which causes Roy to experience his own man pain and share that pain with Oliver. In fact, I think the only reason this was in the episode was so Oliver and Roy could bond over their crushed hearts. 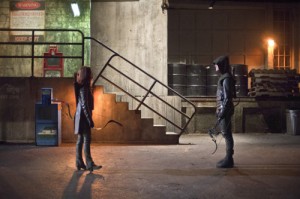 While Felicity is busy with Ray, Oliver keeps running into Carrie/Cupid, whose insistence on him being her lover is getting more and more out of control. It culminates in her most insane stunt: tying the Arrow to the train tracks as a train is about to run them over. Oliver manages to free himself and pull them both away just in time, then gives a rousing speech about how he has to be alone forever. Something along the lines of, “I know what it’s like to want someone, but not be able to be with them.” He ends up saving Cupid from herself, even though he can’t seem to save him from himself.

But wait, the fun doesn’t end there. Felicity hears the whole speech and isn’t exactly happy about it. Then she inadvertently gets revenge for Oliver’s past “manwhoring ways” when she and Ray share their first kiss and Oliver bears witness to it. The emotional rollercoaster that is this episode ends with Oliver throwing a tantrum over how everything turned out, but ultimately accepting that he has to deal with this outcome of mostly his own making. 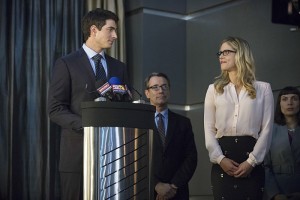 This episode does a good job presenting Oliver’s ongoing situation with the Arrow versus Oliver Queen. He has to live with the limitations of not being both, despite what he or anyone else wants. His situation with Cupid is obviously paralleled with his situation with Felicity. It all boils down to pushing people away. He wants to be with someone (Felicity), but he has to be alone because he can’t risk that kind of relationship with his way of life. Sound logic or not, it still makes the emotional stakes high for everyone involved.

As the episode closes, we’re given two big teasers. First, there’s Ray looking at a prototype A.T.O.M. suit, which is huge for comic book fans who know he’ll eventually become the Atom. Second, there’s the appearance of Digger Harkness (AKA Captain Boomerang) who kills a man with (you guessed it) a boomerang. He even has a catchy line: “What goes around always comes around.” Excited yet? This means fun things are coming to Arrow and I hope that Season 3 continues to have a lot to offer viewers.

Verdict: I give this episode a solid 9 out of 10. It had a lot of great things going for it. There was action, there was emotional turmoil, and there were a lot of great teasers for upcoming episodes. However, between Verdant’s new DJ and Ray Palmer’s “50 Shades” vibe, this episode wasn’t quite perfect.

What about you? Do you agreed with this assessment? Share your thoughts in the comments.