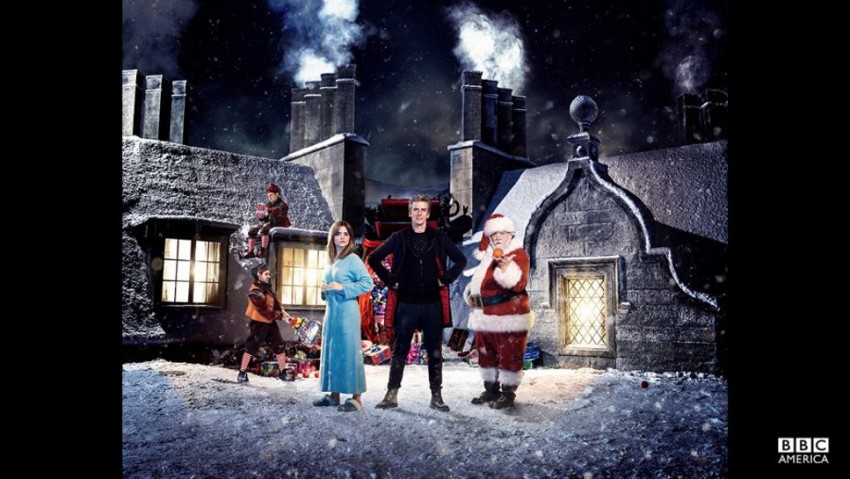 A new promotional image for the 2014 Doctor Who Christmas Special has recently been released along with an ominous snippet from a recent press release by the BBC where they tease this will be the Doctor and Clara’s last Christmas.  This could mean a number of things.  The most obvious meaning would be the implication that Clara may not be long for this show, or the world, depending upon her fate.  But it could just as easily mean that some evil baddie (redundant much?) has a plan to eliminate Christmas from the universe entirely.

A very less likely meaning could be that the Doctor and Clara sit down and seriously consider never celebrating Christmas again.  That would be a pretty dull episode, so we can probably toss that out.

Here’s the bit of the press release dealing with the Doctor Who Christmas Special:

‘In Doctor Who, the Doctor and Clara face their Last Christmas. Trapped on an Arctic base, under attack from terrifying creatures, who are you going to call? Santa Claus!’

Will this really be the Last Christmas for the Doctor and Clara? And what exactly are these terrifying creatures? It’s not the first time the Doctor has visited the Arctic of course. It’s previously been home to an Ice Warrior in Cold War – and the Cybermen! Perhaps there are clues to be found if you watch the teaser for the Christmas episode. You can also catch this exclusive clip for Children in Need.

As Danny Cohen, Director of Television, says: “This year’s Christmas line-up on BBC Television is one of our best ever. There’s world-class talent, edge of your seat drama, outstanding comedy and fantastic storytelling. Across our channels we will bring families together and provide something for everyone.”

The episode will star Peter Capaldi, Jenna Coleman, Nick Frost, Michael Troughton and Nathan McMullen – along with a host of guest stars. You can read more about the BBC’s Christmas Schedule on the Media Centre website.

While you’re here, why not have another peek at the teaser trailer for this year’s holiday adventure?  Click on over to Doctor Who Christmas Special 2014 – Teaser Trailer to get teased.  If you’re lucky, you might even get trailed, too.

For a sneak peek of the yuletide romp, click on over to Doctor Who Christmas Special – Children in Need Sneak Peek.

More Doctor Who coming at Christmas!  Of course, you already knew that.