This week’s episode of Gotham is called “Lovecraft” but I don’t think that’s the most appropriate title. It might as well be called “The Cat and Bat Show”, or maybe even “Everyone is pissed off today.”

Bruce Wayne and Selina Kyle (AKA Cat) are featured very prominently in this episode after an assassin (Copperhead) shows up at Wayne Manor, intending to kill Selina. Bruce and Cat make a break for it, escaping into the depths of Gotham. Throughout their time together, the two kids are shown bonding and learning how to actually understand each other. Cat is very blunt about things, as usual, and Bruce spends his time just trying to keep up with her (literally and figuratively). 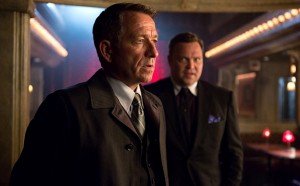 Alfred Pennysworth, as viewers know at this point, cares deeply for Bruce. So when the kids are forced to go on the run while he deals with the assassin (the butler can sure hold his own), Alfred is determined to find Bruce. He turns to Jim Gordon and Harvey Bullock for help, and this is the point in the episode when everyone starts getting pissed off. After a shouting match between the three men, it’s decided that they should all do whatever they can to ensure the children are found and safe.

They go to Fish Mooney for answers, but first have to deal with Mooney’s man Butch, who Alfred confronts (at knifepoint!) and demands to see Fish. After this episode, I don’t think I can have more respect for Alfred, who switches from I’m-going-to-cut-you badass to smooth-talking negotiator in the blink of an eye. After messing with Butch, he turns to Mooney and sweet-talks her with a few suave words. He insists that she should help find the kids because she’s too honorable to let petty self-interest trump doing what’s right. She agrees to help. Go Alfred! 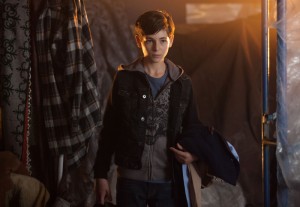 While the cop-butler trio are searching for the Cat and the Bat, the mob storyline comes into the spotlight again as Falcone takes drastic measures to show his “family” that he will not tolerate failure or disloyalty. Between interrogating Penguin and killing one of his own men, Falcone is looking exceptionally scary. And that’s exactly what Fish wants. She states is quite clearly: “The old man is herding his sheep toward me.”

Now let’s get back to the main action: The Cat and the Bat Show. While on the run, Cat gives Bruce a “street clothes makeover” so he looks inconspicuous, and then they run into a familiar face—none other than young Poison Ivy herself. The fun little cameo doesn’t serve the plot much this episode, but perhaps it will in later ones? Who am I kidding, of course it will. 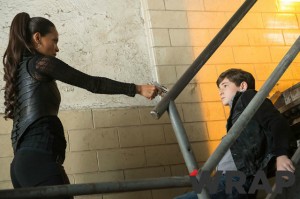 The kids go to Cat’s “fence” (or handler) named Clyde to try and sell some swag (AKA stuff Cat stole from Wayne Manor) but Clyde decides they’ll be more useful as prisoners to hand over to Copperhead. After a harrowing escape and chase through an old industrial building, Cat and Bruce end up separated, Bruce covering for Cat as she sneaks away. But then it’s Alfred to the rescue! Alfred and Bruce are reunited in a heartfelt scene in which Alfred tries to hide his true affection for Bruce, but fails. They share a big hug, and if that doesn’t solidify their father-son bond, I don’t know what will. And as the cherry on top, Selina Kyle later comes back to Wayne Manor and gives Bruce the kiss she’s been teasing him with for multiple episodes.

The title of this episode comes into focus when Jim Gordon finds Dick Lovecraft, and in their confrontation, Lovecraft gives Gordon some hard truth. Lovecraft tells him that the people who really run Gotham are laughing as he goes around huffing and puffing and trying to make things right. Things get worse for Gordon when he fails to keep Copperhead from assassinating Lovecraft. In one of the last scenes, Mayor James chews out Gordon and Dent for Lovecraft’s death. 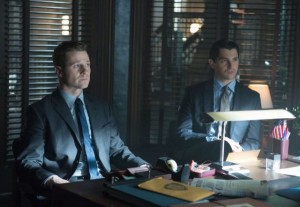 This is where the episode gets a bit jumbled. The mayor’s cover story is that Lovecraft committed suicide because of Gordon’s intense questioning (lame) and then the mayor basically says one of you has to take the blame for it and it isn’t going to be Dent. So off you go, Gordon, to Arkham Asylum. If I were Jim, I would have just resigned. But that doesn’t fit well for later plotlines, so Gordon goes to the asylum, accompanied by ominous music and broody shots of him walking up to the gated entrance. Mid-season cliffhanger, right there!

This episode had a lot fun one-shot lines, too. I just have to share a few:

“You’re so deep in the maze you can’t see over the wall.” – Lovecraft

“Dammit, Alfred! Save your cheese! I can beat the truth out of this kid with a roll of quarters!” – Harvey Bullock

“Am I the only one in this damn town that waits for back up?” – Harvey Bullock 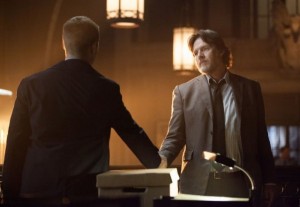 Verdict: I give this episode 9 out of 10. It would have been a ten in my book, except for the sort of lame ending. We knew Gordon was going to end up going to Arkham, but the reasoning behind it was convoluted at best. But besides that, this episode had a lot of great things. The relationship building between Cat and Bruce and Bruce and Alfred was heartwarming and the misadventures of Cat and Bat were thoroughly enjoyable.

What did you think of the episode? Do you agree with my assessment? Share your thoughts in the comments.