This week’s episode of Gotham featured the first appearance of Harvey Dent, the well-known Batman character who (expectedly) relies heavily on his two-headed coin. Dent’s appearance was a mixed bag for me. On one hand, it was fun to see the Easter egg-like nods to his eventual role as Harvey “Two-Face” Dent. On the other hand, that was exactly what made his intro episode a bit cringe-worthy. Dent hammed it up as the councilor who wants to make Gotham a better place, and the show once again reiterated that its Easter eggs are more like 8-foot-tall-neon-sign eggs. His role in the episode was full of moments designed to make the audience go “Hey look, a Two-Face reference!” 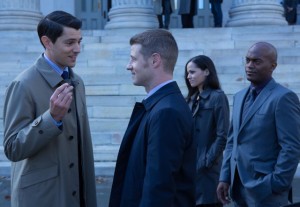 “Threaten me and I will rip you open.” – Harvey Dent

His time in the episode centered around teaming up with Gordon and going after billionaire Dick Lovecraft for the murder of the Waynes, as well as bomb maker Ian Hargrove. Dent’s budding relationship with Gordon is fueled by their same desire to do good, but the lines are blurred when this episode presents Hargrove as a victim more than a terrorist. He’s an example of how Gotham’s system continues to fail the mentally ill/criminally insane. This builds on previous storylines and culminates with the mayor shipping inmates from Blackgate Penitentiary to Arkham Asylum.

Hargrove’s plotline also builds on the bigger arc of the mob power struggle, specifically Fish Mooney’s efforts to overtake Falcone and Oswald “Penguin” Cobblepot’s efforts to ruin her plan. Their rivalry is well established at this point and serves to shed light on why everything around Hargrove is happening. Seeing Mooney and Penguin continue to squabble and attempt to out-maneuver each other is definitely a high point of this episode (not to mention previous ones). Also entertaining was the scene where Penguin snooped around Liza’s apartment, furthering his own efforts to manipulate everyone he can. 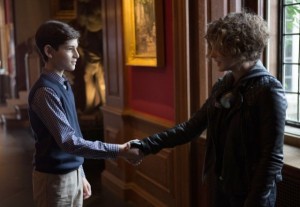 In addition to Gordon and Dent’s crusade to clean up the city and help mentally ill criminals, this episode’s plot focused on the new relationship between Bruce Wayne and Selina Kyle (Cat). Gordon’s idea of witness protection for Cat is to have her move in to the Wayne mansion with Bruce and Alfred. Presented as a street urchin-like girl who doesn’t understand the wealthy, Cat spends her time in this episode trying to figure Bruce out. This all leads to a very heartwarming scene where Bruce and Cat have a food fight and Bruce actually starts smiling and laughing while Alfred quietly, and rather happily, looks on. It was definitely a cute and well-delivered scene.

As the episode progresses, we see another development in the Gordon/Barbara plotline. Unfortunately for Gotham, I (and I think many other viewers) still don’t find Barbara an appealing character. Gordon tries to reach out to her and convince her to come back, expressing his love. But Barbara is hooking up with Montoya, who we know has a stellar history with Jim (*cough* NO *cough*). More than anything, this new relationship feels forced, as if it’s a last ditch effort to make Barbara—who is flat and unlikable—into an interesting person. 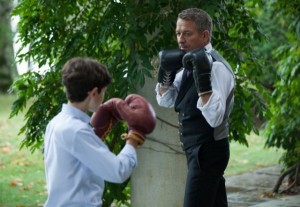 “In Gotham, people don’t fight with gloves on.” – Selina Kyle (although I bet Alfred and Bruce would beg to differ!)

Speaking of relationships, this episode focused a lot on them and the emotional connection between characters (both positive and negative). It was nice to see such developments, even if it made the episode seem to slingshot between overly dramatic and overly cutesy. And late in the episode, Penguin gets a cozy little relationship with Liza. Something along the lines of “I know your secret and want you to keep working for Falcone. Say anything to anyone and you die.”

Overall, I give the episode an 8 out of 10. It had some great scenes, but it also had some irritating qualities as well. Personally, I’d like to see more of Mooney, Penguin, Cat and Bruce, and Ed Nygma (the future Riddler is fun, even in the smallest capacities). But I’d like to see less of Barbara, and Harvey Dent I’m unsure about. Future episodes will help determine if I want more of him or not.

Now it’s your turn! What did you think of the episode? Share your thoughts in the comments.