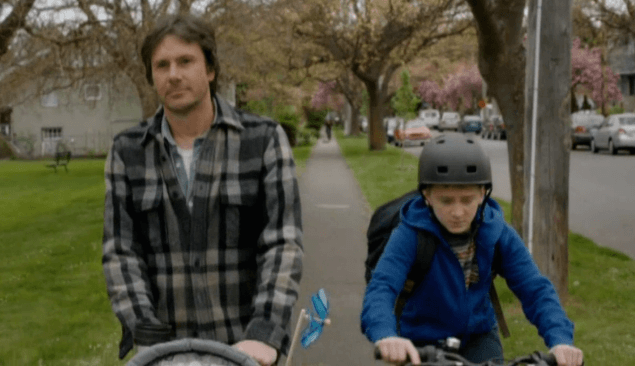 Gracepoint: Review Episode Seven, Are We There Yet?

Another missing boy is the meat and potatoes of this week’s Gracepoint. Tom Miller the son of Detective Miller never makes it to school. The press recants its proclamation of Reinhold’s guilt after he is found dead on the beach, and the pressure to find Danny’s killer is mounting.

We opened to Jack Reinhold’s funeral and wake and one of the snottiest Priests’ I have ever hear. As an aside, I have worked in the Church as a secretary for years and none of the men of the cloth that I met ever spoke in such high handed tones. The scolding of Detective Carver during the Mass and the snide comments after at the wake prove to me that Paul Coates is an ass. The wake reveals Carver’s health issues and he masks those by becoming belligerent and then trying t refocus the energy onto Paul by insinuating that the Priest has taken an unnatural interest in Tom. 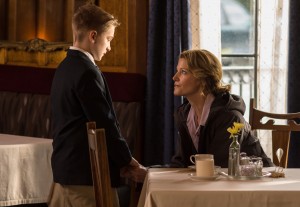 Tom played a pivotal part in episode seven. From the assurances to his father that he could travel three blocks to school, to the angsty jab at his mother “You don’t even know me!” and the lead up behaviors of him hanging out with Vince and making friends with creepy dog lady, Susan Tom is on the forefront and making waves.

We meet Carver’s daughter who points out very succinctly that Carver has trouble placing his family before his career. She also proves that the detective skills run in the family when she discovers his dirty little health secret and confronts him about his heart condition. And disappears from his life just s quickly as she appeared when she goes to catch the bus home without even saying goodbye. 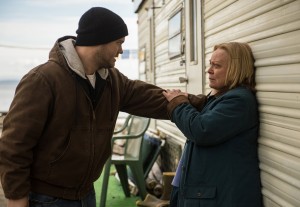 Vince becomes even creepier in the episode and a lot of possible clues are placed in the viewers mind regarding Vince and his behavior. Did he snatch Tom and chop him up and put him in the freezer? Why was he threatening Susan and throwing money at her? Was he really hunting like he told his mother? Hopefully we will find out in the next episode. 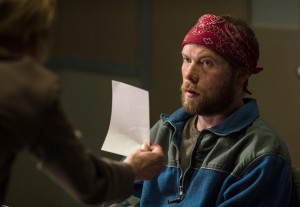 Then there is the emergence of the psychotic hiker, Lars Pierson. His vague answers and dissociative randomness is fine acting but arrives too late in the show to really interest me.

The search for Tom turns up his bike. Undamaged or so it appeared and in the woods. The psychic Raymond also showed up again at Beth’s place to share news of Tom.

In all honesty, I am bored. There are too many threads dangling and even at this late stage new ones being introduced and all of it is unsuccessful. The only character I care about on the show is Detective Carver and I am fairly certain that is part and parcel to David Tennant having once played Dr. Who.

Gracepoint has failed to successfully draw me into its drama. From lack of believable writing – the police do not hold bodies of the deceased until the killer is found, to the snarky Priest with his opinions that no one cares about to the flip-flopping attitude of the Chief of Police regarding Emmett Carver Gracepoint is just failing to ring true. To the little inconsistancies like Tom’s little brother crying out for his dropped toy which appears in once camera shot but not the next… is it that difficult to leave a prop in the background?  I would like to say fix it, but really, it is too late.