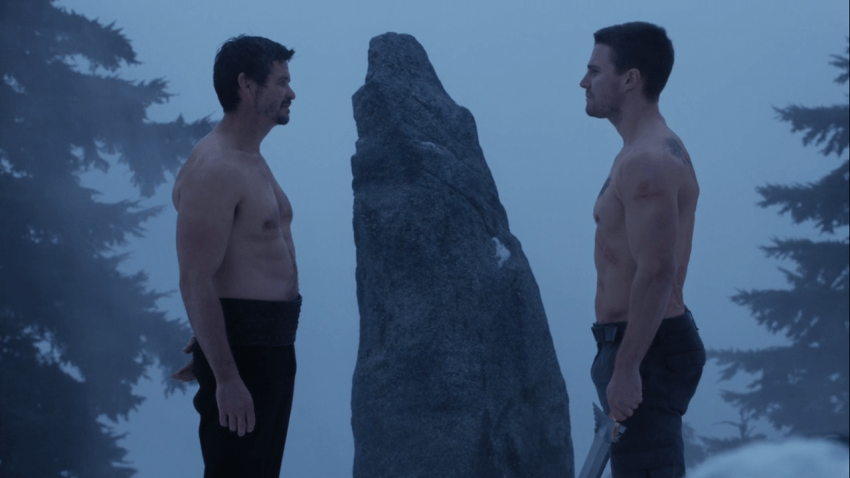 This week’s episode of Arrow, which was also the mid-season finale, was true to it’s name. It was a climb as much for the viewers as it was for Oliver himself. And then that ending happened. And the fandom exploded. But let’s take a step back from the edge for a moment (for the sake of everyone’s sanity.)

This show is no stranger to bringing people back from the dead. Heck, the main character came back from his “presumed dead” status in the pilot. Not only Oliver, but add Sara, Slade, Malcolm Merlyn, and even Maseo (seems like he was thought dead) to the list, and Arrow’s looking a lot like the comic-turned-TV show that it really is. Most comic book character seems to eventually come back from the dead . . . except Spiderman’s Uncle Ben and Batman’s parents.

The hunt for Sara’s killer continues and then lands a shocking twist. According to the analyzed DNA sample, Oliver is Sara’s killer. Since that’s just impossible, they shift suspicion to someone whose DNA is a lot like Oliver’s: Thea. The shocks just keep on coming when it turns out that Thea really is Sara’s killer. She just doesn’t remember it. The episode solidifies just how far Malcolm is willing to go in achieving his plans when he drugs his own daughter and manipulates her into becoming a murderer. Malcolm may have been the instigator of the crime, but Sara’s blood is on Thea’s hands whether she remembers it or not. I’m sure this will come into play in later episodes, and I’m already dreading when Thea finds out (because of course she will).

Side Note: That scene where Oliver sees first hand that his baby sister can fight (and pull off some ninja moves . . . seriously, where did she go after jumping off that balcony? It was priceless! 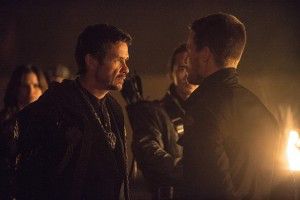 “It’s been 67 years since a man challenged me. You covet death that much?” – Ra’s al Ghul

The League of Assassins is done waiting, and they give Oliver 48 hours to deliver Sara’s killer, or they start murdering innocent people in Starling. With the reveal of what really happened to Sara (courtesy of Malcolm Merlyn), Oliver decides to go to the League and tell them he killed Sara. Oliver will do anything to protect his sister, and his humanity is once again brought to the center of attention when he’s faced with fighting Ra’s, a man who has none.

And speaking of humanity, this whole episode is one big discussion of the one thing that defines Oliver’s humanity: love. His love for his family, his love for his city, and his love for Felicity (cue the collective squee over that one scene. You know the one). Time and again, Oliver has proven that his ability to love, despite all the hardships he’s gone through, is what allows him to be a good person; to be a hero. 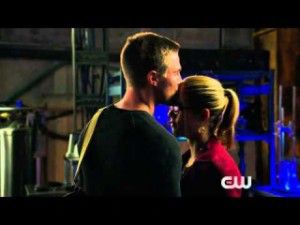 “But I do know two things. The first is that whoever I am, I am someone who will do whatever, whatever, it takes to save my sister.” – Oliver Queen “And the second thing?”- Felicity Smoak “I love you.” – Oliver Queen

We see a counterpoint to Oliver’s humanity not only in Ra’s al Ghul, but also in Nyssa and Maseo (surprise! He’s doing the League’s dirty work now). With Sara gone, Nyssa is back to being the stone-hearted Heir to the Demon. She isn’t interested in honoring Sara’s memory with compassion; her grief has sent her away from the light. With Maseo, it’s still unclear what really happened to drive him into being a ruthless member of the League, but my guess is that his family was killed by China White. Like Nyssa, his grief drove him to give himself in service to Ra’s agenda. These two are people who haven’t retained their humanity like Oliver has; they didn’t have a light within them to help them through the hardships. 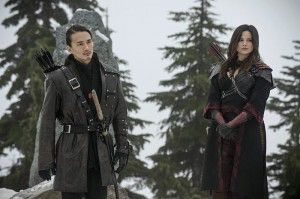 One subplot of the episode featured the Lance family, including Dinah (or Momma Lance), who shows up in Starling as a holiday surprise for Laurel. They have some quality mother-daughter bonding time. And by bonding time, I mean discussing Sara’s death. Dinah figures it out all by herself, and then agrees with Laurel that whoever killed Sara must pay. The other subplot revolves around Felicity and Ray, who reconcile what happened with that “oops” kiss at the end of episode seven. Ray reveals that his fiancee was killed, and that death is what has driven him to the A.T.O.M. project. Felicity is again being asked to take part in vigilante justice, only this time with Ray Palmer.

Both of these subplots relate back to the main plot line through the theme of “know what you’re fighting for.” Felicity’s time with Ray, learning about his past and how it’s affecting his present, leads her to realize how he (as well as Oliver) has this conviction, this desire to fight for what matters to him. Dinah and Laurel’s scenes together lace back to this theme as well. The Lance women have a conviction to find Sara’s killer. Not only find, but make him/her pay. That is a hard conviction that gives them strength. Fighting for Thea is Oliver’s conviction. 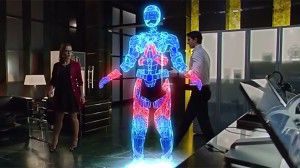 “Why does this keep happening to me?” – Felicity Smoak

The very last scene of the episode, when Oliver and Ra’s al Ghul face off in their duel, was phenomenal. The intense emotion, staggering sword fight, and heartbreaking end kept me (and probably you) riveted to the screen. However, Oliver’s fighting was sloppy, making it painfully obvious that he could not win. But I think it was intentional. The way he threw himself around hopelessly was supposed to highlight Ra’s own superior ability to fight, and although we all wanted Oliver to somehow make a come back, it didn’t happen. What we got, though, was Oliver skewered at the end of Ra’s sword and a literal cliff for him to plummet off of, presumably to his death.

In his last moments, Oliver still tries to cling to his humanity. The flashes before his eyes, of Thea, his mother and father, Felicity, are symbolic of his capacity to love, even though it couldn’t save him in this fight. Despite losing the battle, he’s ultimately winning the war with himself. He becomes a hero willing to sacrifice everything he has for what he believes in. 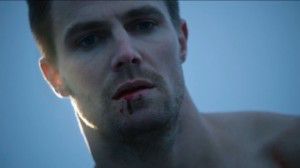 “Forgive and have mercy upon him . . . Excuse him and pardon him . . . Make honorable his reception . . . Protect him from the punishment of the grave . . . and the torment of the fire.” – Ra’s al Ghul to Oliver Queen

Verdict: I give this episode 10 out of 10, mostly for the soul-crushing whammies it delivered. I have to give the show credit, it knows how to deliver emotional blows. The stakes were extremely high and, even though we know the show can’t exist without its hero (so he’ll be back) it was still very hard to watch Oliver not only lose, but also be left to rot at the bottom of a cliff. So, basically, the Arrow writers/showrunners’ message to the fans boils down to this: Merry f****** Christmas. Enjoy your gift of death and tears.

Arrow goes on hiatus until Wednesday, January 21st, so if you can survive for that long, we’ll all find out what happens next in a little over a month. Until then, share your thoughts in the comments. How did you react to the episode?